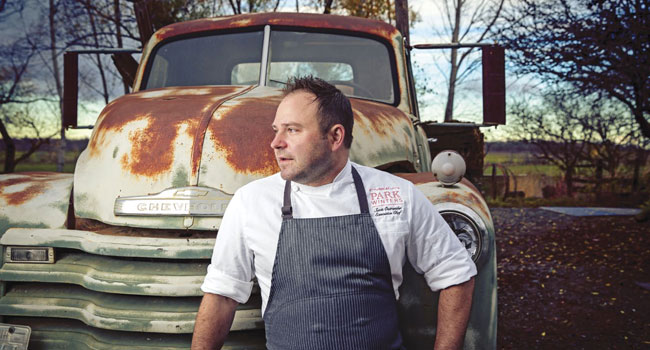 Scott Ostrander has met his farm-to-fork destiny as executive chef at the Inn at Park Winters, a special-event and fine-dining destination in Winters. The chef behind the much-anticipated reopening of Paragary’s restaurant speaks passionately about his new gig, especially because he’ll be cooking with produce from the inn’s picturesque 4-acre farm—his very own field of dreams. Ostrander, 33, returned to Sacramento following a stint at Alinea, the three-Michelin-star modernist restaurant in Chicago, in order to join the farm-focused culinary movement that was transforming his hometown. “I saw there was something happening in Sacramento that I believed needed to happen all along, and I wanted to be part of it.”

SACRAMENTO DINING, THE NEXT GENERATION: “When I first started working in the industry [as a pizza maker at Cafe Bernardo], there were four names that you needed to know: Kurt Spataro, Patrick Mulvaney, Randall Selland and Biba Caggiano. Those were names that were revered and that had a reputation as star chefs in this town. Now, many of the people who, like me, were line cooks or sous chefs during that period are running restaurants.”

FARM-TO-FORK INSPIRATION: “The farm-to-fork movement has definitely shaped me. Earlier in my career, I was lucky to be introduced to farmer Suzanne Peabody Ashworth at Del Rio Botanical. That relationship has carried through my entire career, and it continues to grow. She’s been an inspiration for years. She’s opened my mind and my palate to some of the best ingredients I’ve ever come across.”

WHAT HE GLEANED AT ALINEA: “It was a place where you had to give yourself over to the craft 100 percent every single day. It was a very strict and disciplined kitchen to work in. I was blown away by how efficient the atmosphere was. That’s probably the most important thing that I got out of it. It opened my eyes to how kitchens can run and what they can accomplish if they are structured the way that kitchen is.”

THE OUTLOOK FOR HIGH-END COOKING: “Sacramento leans toward more fast-casual restaurants, which don’t require the level of skill that a three-Michelin-star restaurant requires. You can look at Ella and The Kitchen as the top-tier examples of technique and cuisine . . . but we don’t have a lot of those restaurants in Sacramento yet. I think Chris Barnum [of Localis] is doing something different, but he doesn’t have this giant restaurant; it’s very small, and it’s still in its infancy. If it’s still here in five years, that will be a testament to Sacramento and its eating habits.”

WHAT TO EXPECT AT THE INN AT PARK WINTERS: “We have private-dining events by reservation only with a $125 prix fixe menu consisting of seven courses that we think are greatrepresentations of Yolo County and the surrounding area. The menu will constantly change with the seasons. I wasn’t sold on the place until I came out here. Then I saw that it was every chef’s dream in terms of the location, the surroundings, the opportunity to work with the creative forces that are behind the entire operation. It’s an immersive experience that will create a memory completely beyond food.”