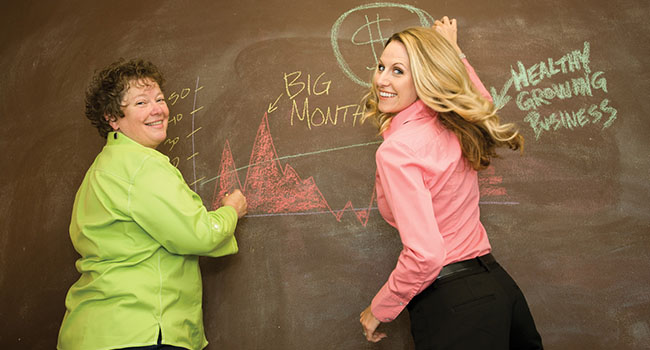 SHOW THEM THE MONEY
STACEY POWELL and SHAWNA FITZGERALD (above) are money mavens. They are the financial minds behind Creating Answers and Finance Gym, two separate yet interconnected financial coaching businesses in midtown Sacramento. While Powell focuses her energy on Finance Gym, which runs money-management boot camps for people in a support group-type setting, Fitzgerald helms Creating Answers, a one-on-one financial coaching business. Together, they have helped hundreds of individuals and businesses regain control of their financial lives.

Similar strokes
Powell, an accountant by training, worked as an auditor and later as a chief financial officer for a nonprofit before starting Creating Answers. Fitzgerald owned a residential and commercial cleaning business for about five years before burning out and going back to school for a finance degree. Fitzgerald joined Powell at her firm as Powell was shifting the business’s focus from traditional accounting to financial coaching. Fitzgerald now serves as the firm’s CEO and “fearless leader.” “People come to us at point A or C and want to get to point Z through financial coaching and accountability,” she says. Clients include numerous entrepreneurs, nonprofits such as Midtown Business Association and River City Food Bank and, interestingly, many individuals from the finance industry.

Get ready to sweat
Powell launched Finance Gym in 2011 because she wanted to help people who couldn’t afford one-on-one finance coaching. The concept is simple: Six to eight people meet in a group for two hours twice a month for six months. The hard part: talking about personal finance. “We put people into support groups and do the thing we don’t [tend to] do, which is talk about . . . money,” says Powell. “But the people get stronger, their money gets stronger, and their financial lives change.”

Strong women, strong business
There’s an advantage to being a woman in the personal finance industry. “People get to a comfort level a lot faster in terms of talking about finances with a softer touch,” says Powell. But being a female business owner is not without its challenges, Fitzgerald adds: “When it comes to finances, there’s a bit of misconception as to men doing it better.”

The big payoff
For Fitzgerald, watching clients understand their business finances is rewarding. “When we see the light bulb go off, it’s just amazing to watch,” she says. Powell’s joy comes from changing someone’s perspective: “I hear them talking about how much better their marriages are, how much better they feel about themselves, how it’s added to the richness of their lives—just by having conversations about money.”

There are event planners. There are green event planners. And then there is DAWN DILLMAN MORRISSEY. When it comes to environmentally friendly event planning, Morrissey helps educate clients on everything from using recycled products to composting food waste after the guests go home. She worked in catering and event planning for several years before starting her own business, Sacramento Event Planners, in 2008. Her sought-after skills have led to her teaching a class on green event planning at Sacramento State. She also audits other planners’ events and provides feedback on how to become greener.

Talkin’ trash
There are three components to green events: product sourcing, waste collection and post-event disposal. Morrissey helps clients, many of them corporations, better understand how to make their events ecofriendly from start to finish. “We can compost food from an event and send it back to the local farm that we purchased it from,” she says.

Law and order
A recent law is helping Morrissey’s mission as well as her business. AB 341 (which fully goes into effect in 2020) will require any group putting on an event for 2,000 or more people to divert at least 75 percent of its solid waste away from landfills. Morrissey helps organizations prepare for the mandate and educates groups about how to source products that will create less waste from the start.

Why green?
Before owning her own business, Morrissey was intrigued by the amount of excess at events. “There is just this wild amount of waste produced,” she says. “You go to a venue and do a buffet lunch or dinner and, without fail, even the most conscious of people just load their plates up.” She wants to help clients understand what they’re consuming. “It’s fine to plan an event and create amazing parties,” Morrissey says. “But to me, it’s much more stylish to create an event that provides opportunities to work with local farms and show people that you don’t need to be completely excessive to be lavish.”

Making a difference, one party at a time
One of the most rewarding aspects of Morrissey’s job? Helping people become better stewards of the environment. “I feel like I’m making an impact on a larger level,” she says.

MOTHERING IS HER BUSINESS
It began as a prenatal yoga class, but Herself Moms has turned into a mecca for mothers in Sacramento and Roseville. Since incorporating her business in 2009, owner JULIE HURST has served as matriarch to hundreds of expectant women, doing everything from teaching them how to breathe during labor to connecting them with lactation consultants after delivery. For Hurst, business isn’t just a way of life. Her business is life.

Bringing her business into the world
Hurst’s love for working with expectant moms began when she started a part-time career in childbirth education at Sutter Memorial Hospital. Eventually, she began teaching prenatal yoga at Sutter’s Pregnagym. When Sutter closed down its center, one of her bosses encouraged her to start her own business. She taught on her own for about five years before deciding to open Herself Moms. “We started right at the lowest part of the economy,” she says. “Everyone was getting laid off. But I was hoping we only had upward to go.” She credits a steady following and support from her husband and daughter for her success.

Maternal bond
Many pregnant women are looking for a place to connect with others, Hurst says. “Once they plug in, it’s like they find a new little family.” For Hurst, happiness comes from the personal relationships that develop. “I’ll be on a journey with a mom for over a year,” she says. A fulfilling business Hurst loves that hers is a caring business, not a competitive one. “I feel like I’m first and foremost about relationships,” she says.

BACK IN THE SADDLE AGAIN
For a decade, JAIMIE LITTLE traveled around the country and to Europe in pursuit of antiques for her shop, Now & Again, in East Sacramento’s 57th Street Antique Row retail complex. But in 2006, she decided to close the shop and move to the country. Now, Little is back in business with The Ruralist, which she opened in April just steps from her previous store. The new shop, which offers rustic antiques mostly from Northern California, is a source of joy—for Little and customers alike.

In her DNA
Little grew up haunting antiques stores in and around Santa Cruz with her mother and grandmother, honing an eye for treasure and an appreciation of once-beloved items. “I’ve always loved things that someone else loved—things that have a story,” she says. Little, who has a background in accounting, opened her first shop with a small inheritance from her grandmother. Her newest venture, which she co-owns with designer Tom Kurth, is a second dream come true.

Wild success
The Ruralist already has met with great success, thanks to word-of-mouth and a hefty Facebook following. The store, in addition to specializing in rustic and agrarian antiques, sells the work of local artists and artisans. The key, Little explains, is sourcing quality items: “At the end of the day, you have to be able to sell what you buy.”

Something to cluck about
One of the store’s most popular items: chicken coops. Little and Kurth get them locally from Two Flew The Coop, whose one-of-a-kind backyard henhouses are a major attraction at The Ruralist. “I posted a picture of one of the coops on Facebook and it just went viral,” Little says.

Frugal faux pas
One of Little’s biggest challenges this time around is customers comparison shopping right in front of her. They’ll see something they like and hop on their smartphones to see if they can find it cheaper online. “It’s the younger generation,” she says. “It’s just their culture.”

Pearls of wisdom
When it comes to business, move without fear, Little advises. Learn as much as you can, make a business plan and adapt it as needed. “If you pay attention to your business, it tells you where you want to go.”

A TRUE HOMEBODY
MICHELE VAN DER VEEN makes dozens of small decisions every day: what type of flooring to use, what window coverings to mount, what faucet to install. But those little decisions add up to big payoffs for her home rehabbing business, Five Points Investments. Think house flipping on steroids. Van Der Veen (along with her husband and partner, Ken Van Der Veen) doesn’t just clean and paint. She tears down walls, makes bathrooms out of linen closets and creates move-in-ready homes throughout Sacramento County.

Building a foundation
Van Der Veen started building custom homes in 1996 before turning her attention to a food packing and distribution business. After a stint in North Carolina, where she trained as a dressage rider for several prestigious competitions, including the Olympics, she returned to California and began rehabbing homes. Now the business is in its fourth year; Van Der Veen and her husband buy, rehab and sell about 18 homes a year.

Homes to flip over
Walk into one of Van Der Veen’s projects and you’re transported to a scene out of a magazine photo shoot. Fresh flowers adorn tables, soft candles scent the air, and music tinkles in the background. Décor is thoughtful and themed, such as French or nautical. No detail is overlooked. “I like to make a finished product,” says Van Der Veen, who has a design degree.

Interest abounds
Real estate agents drive from throughout the region to see her projects. “You have to keep switching it up and keep them interested in your houses because they’re going to bring in the buyer,” Van Der Veen says.

Not a pretty picture
When the homes are ready for sale, it’s hard to imagine how far they’ve come. Van Der Veen has seen it all: houses full of cockroaches, rat droppings on kitchen counters, urine-soaked carpeting. “I have to prepare myself, because at first I’m overwhelmed by how bad it is.”

Oh, the irony
When Van Der Veen goes home at night, it isn’t to a house like the ones she’s rehabbed. It’s to a 34-footlong fifth wheel she shares with her husband and two of their three children. The couple is in the process of building their dream home—when they’re not busy turning houses from battered to beautiful. “Everyone keeps telling us we should have our own TV show,” she jokes.

These Restaurants Aren’t Ready To Reopen—Not Yet, Anyway