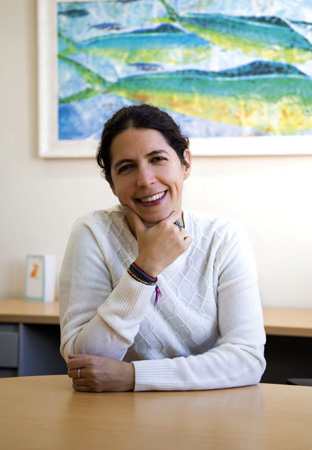 HOW WELL DO YOU UNDERSTAND YOUR OWN PERSONALITY? And how do others perceive you? These are the kinds of weighty questions that Dr. Simine Vazire and her colleagues investigate at the Personality and Self-Knowledge Lab at UC Davis, where she is the director. We talked recently with Vazire, an associate professor in the department of psychology, to learn more about how research is conducted at the lab, whether we are good judges of our own personality traits, and why people who know they are arrogant keep behaving that way.

How do you research people’s perception of their own personality?
Our research participants, usually college students, fill out personality questionnaires so that we get a picture of what they think they are like. We ask them things like how talkative are you? How kind are you? We also ask them to nominate people who know them well—roommates, friends, parents, dating partners, co-workers—to fill out a questionnaire about their personality. We also have subjects wear a recorder that records 30-second audio snippets of whatever they’re doing during their day. That gives us the ability to compare what people say they’re like to what their friends and family say they’re like to how they actually behave in their everyday life.

Does a person have to be born with a good sense of self-knowledge, or can it be learned?
I don’t think we know from a scientific perspective. My best guess is that self-knowledge stays pretty stable over a lifetime. My lesson from my own research is that you’re not going to learn more about yourself by thinking about it. You have to engage with other people and try to figure out what they think of you. We have a filter through which we perceive ourselves, and to improve our self-knowledge we have to step around that somehow.

Do most of us have a pretty good idea of how others see us?
In the world of personality research, a lot of researchers had assumed that your self-report is the gold standard—that the best way to measure personality is to ask people what they’re like and to take their word for it. But our research suggests that there are quite a few blind spots, that there are things that people don’t or can’t report accurately. It basically comes down to how evaluative—how desirable or undesirable—a personality trait is. People tend to know their internal emotional life, they tend to know if they are an anxious person or if they’re optimistic or pessimistic. But if someone tells you that they’re really funny, I would say that that tells you more about their self-esteem than how funny they actually are.

Narcissism is in the news a lot these days. What have you learned about it from your research?
I’ve only studied what we call subclinical narcissism, not narcissist personality disorder, so I’ve looked at things like arrogance, putting people down or being condescending. In our research, we found that most people who have these characteristics actually are aware they have these qualities. Which led us to the question of why are you doing that? Research shows that even though arrogance has interpersonal costs, that it makes them less likable, they think that it will benefit them in terms of getting ahead in the world.

What have you learned about yourself after years of studying other people’s personalities?
One thing I realized from wearing the recorder myself is how quiet I am. There were lots of times when I would listen to myself and I thought I was participating but I realized those thoughts were only in happening in my head. It helped me understand better people’s reactions to me. I do think that being aware of how you come across to others, especially if you’ve noticed that your behavior doesn’t always match your internal thoughts and feelings, can be really useful.