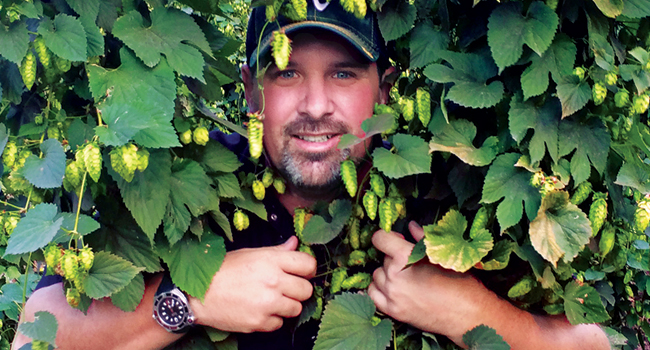 It takes moxie to tattoo your forearm with the logo of a company that may fold a few months later. But that’s exactly what Jeremy Warren did when he founded Knee Deep Brewing in Auburn.

“I tattooed it on there when I started the company,” explains Warren. “That way, every morning when I brushed my teeth, I would have to look at the tattoo to remind myself that this was not going to be easy and I was going to have to work hard. It was a daily reminder of what I was going up against. There was a chance I would have a tattoo of a brewery that didn’t exist.”

If you’ve tasted Knee Deep’s beers, then you know that same nerviness informs its approach to brewing: big, bold, unapologetically hoppy beers. “We definitely like to go big, to make beers with a lot of character and complexity,” says Warren, brewmaster and co-owner of Knee Deep with partner Jerry Moore. “We look for a good hop aroma on the nose and make sure we use enough hops so that when you finish your beer it still smells full.”

It’s a formula that appears to be working. Knee Deep is winning fans—and shelf space—across the country and even abroad as distribution grows. The goal now, says Warren, is to invest in quality-control practices that will increase the product’s stability and consistency as the business expands. “At the end of the day, what’s really going to set us apart from the other guys is quality control,” he says.

Warren, who started home brewing as a student at the University of Nevada, Reno, founded Knee Deep in 2010 after being laid off from his corporate job. His Simtra Triple IPA helped put Knee Deep on the map.

“I designed that beer at a time when I wanted to prove a point to the other craft brewers and the retailers, to say that Knee Deep is something that you want to pay attention to,” says Warren.

He’s confident the craft beer scene that’s exploded here will soon make the Sacramento region a destination for beer lovers across the country.