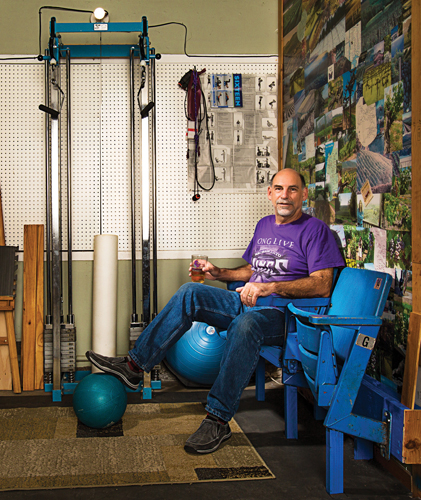 AT FIRST I THOUGHT my husband, a longtime Sacramento Kings fan, was joking. Back in 2015, the Kings offered season ticketholders their seats—the actual seats—from the now-defunct Sleep Train Arena (you know, ARCO) as an enticement to renew their tickets for the 2015–16 season. Yes, the hard-plastic, beat-up, scratched, grimy folding chairs. “Take home a piece of history,” the Kings promotional letter stated. “You’ve earned it.”

“Where are you going to put these seats?” I asked. “Not in the house?”

Granted, I am not a fan of professional sports, so maybe I am a little jaded when I think of the thousands of dollars my husband, Mark, has spent on his beloved basketball team—not only on games but on food, beer, parking and so forth. But now, the Kings wanted their fans to do the work for them? Haul away the old, ratty, worthless seats? What mastermind in the Kings organization devised this genius marketing scam plan?

For 10 hours straight on a Saturday this past October, more than 2,000 hard-core, dyed-in-the-wool Kings followers turned out to fetch their cherished keepsakes. My husband and I were out of town on the designated pickup day, so Mark’s daughter, Annie, who often accompanies her dad to the games, stepped up. At her scheduled time, Annie lined up behind a sea of other SUVs, presented the proof-of-ownership papers, drove into the belly of Sleep Train Arena and onto the former basketball court, hopped out of the car, picked out two seats, hefted them into the back of our vehicle and exited out the other side. Luckily, she brought along her husband, Matthew, because according to a pre-pickup email, “Kings staff will not be able to assist in loading seats into vehicles.”

Now mind you, Annie did not get the actual two folding chairs that Mark sat in for 17 long seasons, as promised by the original 2015 letter. “Your seat is yours,” it stated. “That’s right, we mean the actual seat in which you’ve created so many Kings memories is yours to keep.”

Fast-forward to 2017 and, according to the Kings, “Due to the historic nature of the original seat installation and design, we are unable to accommodate requests for the exact seats that you sat in during the 2015–16 season.”

Instead, Annie was instructed to choose the closest two seats from the many that were already unbolted from the cement bleachers and waiting to be carried them away. As a result, we have the seats in which someone else created so many Kings memories.

Keep in mind that you cannot actually sit in these chairs without executing some fairly intricate engineering. “Since they have been detached from their original placement in the arena, they are no longer functioning seats,” the Kings email said. “The seats will not be mounted or free standing, so they are not safe for sitting as-is.”

For several nights in a row, after coming home from work, my normally level-headed husband—an intelligent, professional man—attended to his two trophies. He gently scrubbed and hosed them clean, diligently built and painted (blue to match the color of the seats, of course) a wooden floor mount, and calmly contemplated where to install his prize. After much consideration, an esteemed location was chosen: The seats would be fitted against the side of his wine room—thankfully in the garage—with an unobstructed view of a television (above his workbench) on which he can watch his treasured Sacramento Kings. I can only be grateful it was not in the recently redecorated den.

So what did other season ticketholders do with their newly acquired furniture statements? “They are coming up with creative ways to display this piece of history,” says John Jacobs, senior director of public relations for the Kings. “Some people are putting them in memorabilia rooms. A couple of fans talked about man caves.” Yes, he actually used the term man caves.

On the bright side, at least the seats did not end up in the landfill.