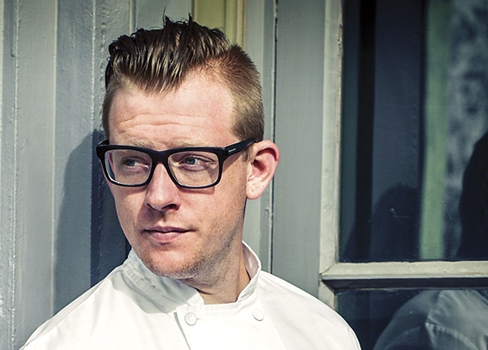 He’s been called a phenom and a wunderkind. Early in his career, he cooked at some of Sacramento’s most lauded restaurants, including Masque (which closed in 2008) and the first iteration of Blackbird Kitchen. He’s done recent stints at two of San Francisco’s Michelin-starred restaurants, Coi and Saison. And he’s heading up the kitchen at Saddle Rock, the much-anticipated venture that pays homage to a legendary Sacramento eatery. (The new Saddle Rock will take over the space on L Street previously inhabited by Capital Dime.) Meet Kevin O’Connor, the 26-year-old chef from El Dorado Hills who’s about to take Sacramento’s dining scene to a whole new level.

CHILD’S PLAY—As a kid, I was always encouraged to be in the kitchen, and I found a happy place there at a pretty young age. When I was 7 or 8, I’d make my parents breakfast in bed before they woke up. I would also try opening little restaurants in my bedroom.

EARNING HIS CHOPS—There were all kinds of aha moments along the way, like working at Masque when I was in high school. Masque was a place that I totally didn’t deserve to work in. I was very underqualified, but at the same time I was so persistent. I would go there probably once a week with my resume until the chef took me on. That’s when my love of fine dining was sparked.

THE BIG LEAGUES—The way [Coi executive chef] Daniel Patterson runs his kitchen is completely silent; you can hear a whisper. I got yelled at for tapping my spoon on the edge of a pan. But it was really awesome. I had just left Blackbird and had taken some time off, so I was champing at the bit to cook again. Apart from all the technique and cool stuff happening on the plate, the level of precision and the attention to detail and the professionalism is really what struck a chord with me. Also, if you’re able to say that you worked for free, really hard, for a month at one of the best restaurants in the world, you’re more likely to get hired somewhere at that level, which actually ended up happening. From Coi, I went to Saison for a few months, which was also amazing. Shortly after I left, they got their third Michelin star, which is huge, so at that time they were cranking as hard as any kitchen could. It was a lot of fun and I got to learn a ton, but at the end of the day it wasn’t for me.

HOMETOWN DINERS—Diners in general have frustrated me in the past just like any other chef. But you have to feed the people where you are. You can’t get too wrapped up in your ideals because some people may not want that. I think you can find a happy medium, and that’s where my style of cooking has gone and what working at Saison helped me realize. It’s all about good food at the end of the day. It doesn’t have to have all sorts of garnishes or 10 guys around the plate with tweezers to make it delicious. It just should be thoughtful and local and loved, and that should make everybody happy.

A MEAL TO REMEMBER—I went to Empress the very first night they opened. I really just wanted to grab a cocktail and maybe a snack and look at the place. I couldn’t help my excitement for Mike Thiemann and Matt Masera and that crew since those are guys I’ve known for a long time and always looked up to. But as soon as I walked in, I knew that I was going to eat a lot. Mike ended up feeding me a fantastic meal—simple things like pork and cabbage, nothing too crazy—and it was perfect: familiar flavors and some great technique.

SADDLE ROCK, PAST AND FUTURE—I’m really excited for Saddle Rock. This is the first time I will be at the helm of a kitchen in Sacramento since Blackbird. There’s a ton of history tied into Saddle Rock, and being a huge history buff, it’s been great doing the research. It really starts to create a vibe for the brand and for the restaurant even before we get a chance to put our spin on it. We’ve got this built-in feel that we’re all excited to bring to the next generation.

THE WUNDERKIND LABEL—It’s really flattering and is sometimes embarrassing, but in the grand scheme of things, I’m just lucky I got a head start. It’s not like at Blackbird I turned 22 and became an incredible chef. It was something I had been working toward from a very young age. I put my head down and did 10 years of grinding. In just about any field where there’s creativity involved, that will get you somewhere where you’ll receive some praise. So they’re great words, but it just means I was wonderful yesterday. We’ll see what happens next.