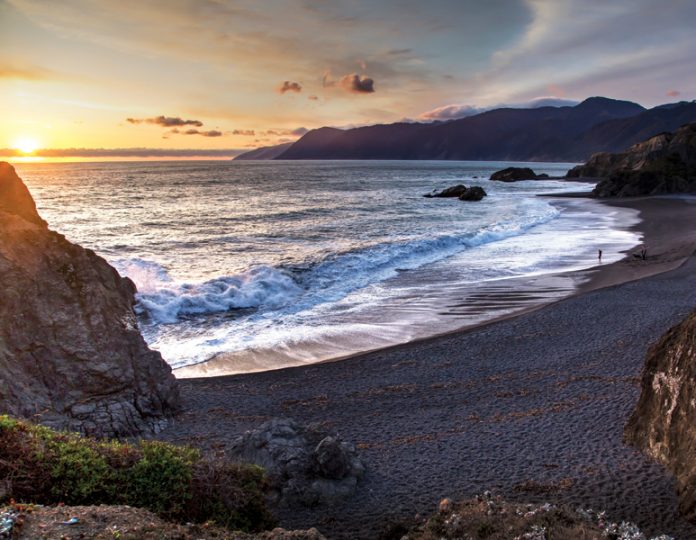 If you were living in Humboldt County in the early years of the 20th century, chances are you would have met Arthur Benbow. An English immigrant and itinerant salesman who peddled everything from sewing machines to opium (“a roving convenience store,” as Humboldt historian Teresa Porter describes the hapless hawker), Benbow migrated from logging town to mining outpost, aiming to support his nine offspring but failing at every turn. His discontented wife, Maude, eventually left him for the more scholarly atmosphere of Berkeley, where she died from Spanish influenza in 1919.

This would all make for a tragic family saga if not for the enterprising nine Benbow siblings, all of whom somehow ended up in marketable trades. There was Evangeline, an accomplished painter. Burt Benbow was a master watchmaker and jeweler with several patents to his name. Robert became a rancher, Clara, a schoolteacher. And there was Joe Benbow, the oldest, who would make a name for himself in Eureka politics.

Left to map out their own livelihoods, the Benbow siblings banded together and agreed that a resort might make for a profitable business. The Redwood Highway had just been completed in 1920 and motoring was becoming a national pastime. Helen Benbow oversaw the construction that got underway on New Year’s Day in 1924. Two years later, the Benbows opened their doors to travelers.

I learned about the colorful Benbow family earlier this year after staying at the Benbow Historic Inn, that imposing English Tudor-style edifice that still looms above the Redwood Highway. It was July, the height of the tourist season, and I initially had had trouble finding lodging. My destination was actually the so-called Lost Coast, the rocky 50 or so miles of beach running from Shelter Cove toward Arcata, but I also wanted to break up the seven-hour drive.

The pending journey was mostly at the invitation of a fellow journalist who called the Lost Coast home for more than two decades. In the 1980s, Dale Maharidge worked at The Sacramento Bee, winning a Pulitzer Prize along the way, and then

ended up teaching at Stanford University. During his 10 years there, he’d bought land near Petrolia, site of California’s first oil strike and today a quiet enclave with a pretty white steeple church. Here at the northern edge of the Lost Coast, Dale built a house and studio encircled by colonies of Douglas fir and white fir that he would over the years pare away to afford him and his guests a sweeping, privileged view of the Pacific Ocean. He told me about all this one June evening over dinner in Sacramento and suggested I visit.

Truth be told, the long drive was offputting, and I almost told Dale, “Someday.” But he then added that he was putting his home on the market. The only thing to do, obviously, was fix a date. And so we did.

I was curious, to say the least, about Dale’s abode off grid—by which I mean not just turning off your phone, but rather a bona fide lack of electrical power and its myriad benefits—and what it was about the Lost Coast that appealed to him and others, especially since reaching the rugged area is so hard. Jagged cliffs and sea stacks, waterfalls and scree deposits and steep ridges all do their part here to compose one of California’s wildest, wettest terrains. But the long commute, too, was partly behind Dale’s decision to sell, despite the Lost Coast’s beauty and isolation that lend themselves so well to the writing life; he described for me hourslong shopping expeditions to Arcata that as a younger man were part of the adventure but that had become tedious over the years. Also, in 2001, he’d taken a teaching post at Columbia University in New York and was only in California some months of the year. Construction engineers tasked with building Highway 1 reportedly threw up their hands once reaching the King Range National Conservation Area, which takes just 3 miles to soar 4,000 feet above sea level. About 30 miles north of Fort Bragg, the highway shoots inland to connect with Highway 101 at Leggett, effectively relegating the coast lost to travelers, or at least those in cars. Backpackers can meander the Lost Coast between Ferndale and Shelter Cove. Dale was spending part of his summer in Sacramento, and so we drove northward together. On the first night, we checked in at the Benbow, which, as we approached, we saw was nearly covered in scaffolding, part of a $10 million renovation. Since the Benbow family sold the hotel in 1962, the four subsequent owners have added on and scaled back, all with an eye to preserving its historic look and feel. Sections of the original half-timbered façade remain and include attractive cottage windows and a rather regal half-circular drive entry, along with an unmistakable refinement inside.

Back in the day, the inn included a golf course and riding stables and was powered by two diesel generators until 1930, when the Benbows constructed a dam and powerhouse on the Eel River’s south fork. The hotel’s reputation grew, attracting Hollywood idols like Clark Gable and Spencer Tracy. Joan Fontaine honeymooned there with two different husbands. Eleanor Roosevelt and President Herbert Hoover also checked in at the Benbow. Later in the tour, I would notice this same genteel aura at lovely Ferndale, with its wellpreserved Victoriana set against an arcadian landscape.

Across the decades, the stately Benbow has admirably held its own, through the 1950s and the rise of the motor lodge and,

more recently, cheaper chain hotels, boutique inns and Airbnb. It was placed on the National Register of Historic Places in 1983. King Abdullah of Jordan stayed there in 2008, and the singer Cher has also been a guest. And now Dale and I were, too.

To reach our room, we climbed a winding wooden staircase and passed antique oaken coat hooks and aged mirrors. Photos of the inn’s early days included a fetching Helen Benbow astride a Harley-Davidson, and flappers and dandies in zoot suits lounging before their Ford Model Ts. When we entered our third-fl oor room, I quickly noticed a silver tray with a decanter of sherry, and the window opened out onto a dining terrace and grassy riverbank.

A small sign in the bathroom indicated there was a nearby swimming pool (at the neighboring KOA campground). It was warm twilight by the time we dipped in there to leisurely float about on plastic foam noodles. After showering and changing, we walked to the Benbow’s terrace and then down to the lawn, which gave way to a mostly rocky and sandy riverbed. Dale was struck by the perfectly symmetrical arched stone Benbow Bridge spanning the river; I saw a sign later noting it had been built in 1931, part of the old Highway 101. Further on, we watched ravens prance about and take flight before we sat on the rocky bank, where Dale pointed out fallen redwoods that continued to sprout branches. On our way back to the hotel the same way we came, we picked and feasted on ripe blackberries from bushes that tumbled down to the riverbed.

By early afternoon the next day, after an hour’s drive or so, we entered the 53,000-acre Humboldt Redwoods State Park. We turned for the coast here, exiting at Mattole Road and then stopping to walk among the Sequoia sempervirens, or coast redwood, at Founders Grove. More than one visitor, domestic or foreign, has observed that when a tree determines to grow in California, nothing can stop it. The vast redwood canopy allows for few other species besides ferns here, but there is also redwood sorrel, an eye-catching cloverlike ground cover that sprawls freely. Beyond the trickle of a small stream, and birds here and there, and even with the highway not far away, it was practically silent as we walked among the giants.

Mattole Road, Dale had warned me, is a rough ride; five pages of his detailed directions to his hideaway, which he’d sent

me earlier, commence ominously with “There’s no easy way.” Trucks hauling soil and fertilizer to cannabis farms over the years have pounded sections of the asphalt into rubble; worse, sunlight wafting through the trees made it at times impossible to see the deep fi ssures. We crawled along at a snail’s pace, pulling over occasionally so Dale could point out to me white plastic structures—grow houses—nestled deep in woody canyons; at one point, just after crossing the Mattole River at Honeydew, a man drove past us with his stash hanging out the front passenger window. We were, without question, in Humboldt County.

At Petrolia, we drove onto Lighthouse Road for the beach slightly north of Punta Gorda. There, meeting a fierce wind, I followed Dale to the surf and then toward rocks covered in California blue mussels. Dale clambered over them clutching a plastic bag, waves lapping at his heels as he gingerly kneeled to pluck seaweed that would accompany our steak dinner. Back on the road, we turned onto a creviced uphill course to Dale’s house, passing by an old barn and two latched gates and over cattle guards. I gaped out at the sea. That evening, while soaking in Dale’s hot tub, we watched the fog morph along the coast and lazily shroud the sunset. Rough road be damned, the views were epic.

Pushing north the next day along the coast, we had brilliant sunshine toward Arcata, the Lost Coast’s proverbial capital and home to Humboldt State University. I’d booked a vacation rental through the helpful Arcata Stay website and, upon entering the second-story apartment, we were impressed with the spacious interior. Moreover, it was a short walk from the central square. Strolling among an agreeable crowd of students and the slightly bedraggled, Dale pointed out a towering bronze statue of a President William McKinley beset with bad fortune: Erected in 1905, it was toppled by the 1906 San Francisco earthquake and, more recently, Dale told me, vandals had lopped off finger. We poked into Northtown Books to browse the—by only some standards— eclectic magazines. But the fine weather drew us outdoors again. At the Arcata Marsh and Wildlife Sanctuary, which actually doubles as the city’s wastewater treatment facility, we spied marbled godwits foraging on the expansive mudfl ats, Queen Anne’s lace in full bloom and a barricade of cattails concealing picturesque and peaceful sloughs.

By evening, we were seated at Samoa Cookhouse, the same lumberjack dining hall where, in 1983, my parents took me on my first road trip, from Sacramento to Victoria, British Columbia. Our comfortfood meal on this more recent evening included thick chicken-and-barley soup and ham with gravy—perfect for the chilly evening, along with a soak later back in Arcata at the invitingly rustic Finnish Country Sauna & Tubs.

I recalled all of this the next day, driving back to Sacramento, and how photos from that road trip with my parents show a scowling 12-year-old me miffed at having to endure a family vacation. How shameful, I think to myself now. After all, I might have instead been born into a family like the Benbow brood, neglected and left to my own devices amid the magnificent redwoods and rocky, windswept beaches to the west. Alas, at that, I let my mind run as wild as the Lost Coast.