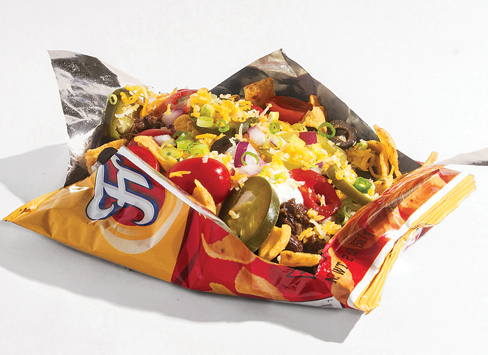 Junk food may get a bad rap, but it doesn’t have to be that way. By using high-quality ingredients and employing a little TLC in the kitchen, even foods with a downscale provenance can earn some culinary respect. Locally, we discovered three examples of low-brow grub that have won over even the most discerning diners.

“Everyone had been asking about putting nachos on the menu,” says owner Wayne Morse. But chef Beau Fairbairn had something else in mind: Frito pie. Known in other locales as a walking taco, Sail Inn’s Frito pie is a bag of Frito chips split open down the middle and piled with housesmoked brisket chili, sour cream, onion, tomato, cilantro and jalapeño. The packaging is part of the kitschy charm. According to Fairbairn, “If you don’t serve it in the bag, it’s not Frito pie.” The novelty seems to have caught on. “At first people were like, ‘What the hell is this?’” says Fairbairn. “Now everybody loves it.” 1522 Jefferson Blvd., West Sacramento; (916) 272-2733; sailinngrotto.com

Chef Dane Blom isn’t out to impress customers with exotic ingredients or impossible-to-pronounce dishes. “I’ve tried to make all of our food approachable and something familiar that people can relate to,” he explains. “I think the onion dip is one of those things that everyone has had.” The recipe—caramelized sweet onions mixed with sour cream, buttermilk, chives, salt and pepper—is a satisfying step up from the Lipton onion soup mix version. The dip is served with house-made Kennebec potato chips. At dinner, it’s embellished with Passmore Ranch caviar. “It’s totally fun having it on the menu,” says B lom. “I don’t look at it as junk food. I just look at it as something we grew up with.” 1525 Alhambra Blvd.; (916) 588-4440; hawkspublichouse.com V. Miller Meats is located just half a mile from the nearest McDonald’s, but it would be senseless to settle for an Egg McMuffin when this pleasant butcher shop is turning out such delectable breakfast sammies. One popular version is stacked with house-made breakfast sausage seasoned with rosemary, ginger and sage, a fried egg from Skyelark Ranch, cheddar cheese and tomatillo salsa on a brioche bun from Grateful Bread. “We’re trying to educate people about what it means to start with good ingredients,” says butcher Matt Davis. Customers are definitely catching on. The butcher shop sells between 80 and 120 breakfast sandwiches during the brief time they’re available each week, from 10 a.m. till noon on Saturdays and Sundays only. 4801 Folsom Blvd.; (916) 400-4127; vmillermeats.com