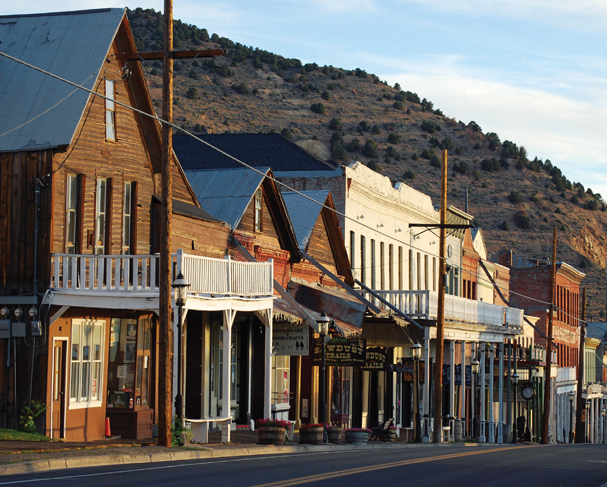 Many times, locals miss out on what is in their own backyards. Many New Yorkers have never been to the Statue of Liberty, for example, and some Sacramentans have never been to Sutter’s Fort. One such place in our regional backyard is Virginia City—just a half hour past Reno, Nevada (along Highway 341), but securely anchored 150 years in the past. It took 29 years for me to venture up the hill to be a judge for the annual Rocky Mountain Oyster Fry. Since then, I’ve been back three more times and still have hit only about half of the attractions offered.

As you walk down the main street of Virginia City, you might expect to see Little Joe and Hoss Cartwright standing in front of a saloon. Many episodes of the ’60s-era television show “Bonanza” were set in this historic town closest to their fictional Ponderosa ranch. Today, Virginia City still maintains much of the old mining-town atmosphere. While California was seeing the decline of the Gold Rush, Virginia City was coming into the silver rush with the discovery of the Comstock Lode in 1859. Soon it was the biggest and richest town between Denver and San Francisco. The entire town was named a National Historic Landmark District in 1966. In fact, there’s no modern grocery store or gas station in the town.

Today, Virginia City makes the perfect getaway trip for adults or families. The many attractions, events and activities will keep you coming back again and again in order to complete them all.

Virginia City’s economy is based on tourism, and therefore the yearly calendar is chock-full of events. Every month has at least one major event, including the World Championship Outhouse Races, the International Camel Races, Civil War re-enactments and The Way It Was Rodeo. Parades are another favorite occurrence, with seven parades during the year. Daytime sees the most activity, leaving the evenings to adults to go saloon hopping or ghost hunting. In some ways, Virginia City is like the state fair in that you need tickets for many of the attractions, and it’s best to buy a package deal. That makes the Visitor Center, in the heart of

town, the first stop of your visit. While you can always buy tickets at each attraction, there is usually a slight discount when you get them at the Visitor Center instead. You can also buy pre-made Adventure Passes, such as the Silver & Gold Adventure that includes the V&T Railroad, Trolley Tour and Ponderosa Mine Tour.

If you are a ghost hunter or like supernatural stories, Virginia City has plenty of haunted locations that have been featured on such TV shows as “Ghost Adventures.” There are 11 haunted sites of note that you can visit on your own, and several ghost tours are offered in town. If you have the nerve to stay at a haunted hotel, your choices include Silver Queen Hotel and Gold Hill Hotel.

Gold Hill Hotel is not only haunted but is the oldest hotel in Nevada, dating back to 1861. While not in Virginia City proper, it is only a five-minute drive to the next town of Gold Hill. Its colorful history includes visits by Mark Twain, a couple of shootings and plenty of ghosts. The original stone structure is where the haunted rooms are located. Those fearful of ghosts can stay in the wooden section that was added in 1987. Larger parties, or those searching for more privacy, can book Miner’s Cabin or one of the fully equipped lodges across the street from the main hotel. Find white tablecloths and a fine dining experience at the hotel’s restaurant.

On a hill across from the city sits Silver Terrace Cemeteries. In actuality, at one time there were as many as 25 cemeteries. Cemeteries were often based on religion (Catholic, Jewish), occupation (firemen) or fraternal orders (Masons, Improved Order of Red Men). Many of the plots are fenced or bordered as was typical of the Victorian era. As you wander around the gravesites, you will note that most of the inhabitants came from far-off cities and countries before finding their end in Virginia City.

A mine tour is a must for a city whose existence was dependent on the silvermining industry. Several mine tours are available in town, with many of the mine tunnels directly under the city. The entrance to The Best and Belcher Mine is where the Ponderosa Mine Tour starts. Inside the Ponderosa Saloon on the main street, the 30-minute tour winds through cramped mine shafts with more than 300 pieces of antique mining equipment on display.

You can rest your feet while getting a history lesson on the V&T Railroad’s Comstock Train Tour. During the silver bonanza, as many as 45 trains a day would transport materials in and out of Virginia City on one set of tracks. The historic steam locomotive used for the tour does a 4-mile round trip to Gold Hill and back, passing 17 different mines and other points of interest. There are seven departures daily, making it easy to fit into your schedule. Throughout the year, V&T offers special train tours including Civil War

Battle Trains, Candy Cane Express and Day Out With Thomas the Tank Engine.

Samuel Clemens arrived in Nevada in 1861 with his brother Orion, who had been named secretary of the Nevada Territory. In 1862, Samuel became editor of the local newspaper, the Virginia City Daily Territorial Enterprise, and in 1863, he used the pseudonym Mark Twain for the first time. It’s only appropriate that the Mark Twain Museum is found at the site of the old Territorial Enterprise’s offices. Many of the furnishings and printing equipment he used during his time there are on display. Mackay Mansion originally housed offices for the Gould and Curry Mining Company before being purchased by John Mackay, one of the “Silver Kings.” Built by George Hearst, father of William Randolph Hearst, it contains original furnishings and mining artifacts as well as several ghosts. Actor Johnny Depp was reportedly visited by one while staying there during the filming of “Dead Man.”

Not far from the mansion is the Historic Fourth Ward School. One of the largest buildings in town, this four-story school built in 1876 includes 16 classrooms once filled with children spanning elementary through high school. The onsite museum includes not only the history of the school and its alumni but also of the town and the era.

As with many Western towns, there was no shortage of saloons in Virginia City’s glory days. In the 1870s, there were as many as 115 saloons for a population of only about 25,000. A number are still open today, with the most famous being the Bucket of Blood Saloon. If you need a drink, stop by from 2 to 6 p.m. on the weekends to catch David John and the Comstock Cowboys. This popular band plays Western Nevada music while sporting period attire.

Any lover of firemen, young or old, will be fascinated by Comstock Firemen’s Museum. Filled to the gills with artifacts and antique fire engines, this is one of the finest firemen’s museums in the country. Virginia City experienced its own devastating fire, The Great Fire of 1875, when one square mile of the city was destroyed, displacing 2,000 residents. The oldest hose carriage dates back to 1839 while other historic pieces have been in movies such as “In Old Chicago” (1937) and “Hangover Square” (1945).