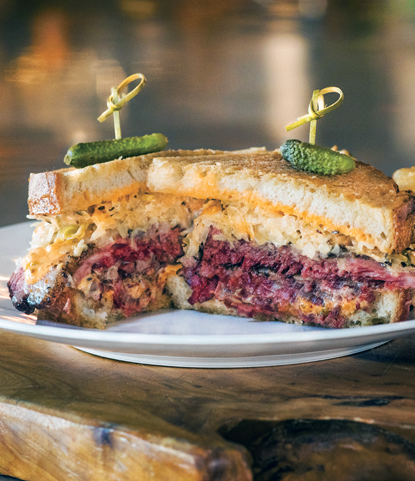 There’s a small but growing restaurant trend: the secret, off-menu item. It’s a dish that only insiders know about. You have to ask for it. It’s generally available in limited quantities, and only at certain times. All of which makes the off-menu dish the food equivalent of tickets to “Hamilton.”

Local restaurateur Michael Fagnoni recently started serving an off-menu pastrami Reuben at Hawks Public House, the midtown restaurant he co-owns with his wife, Molly Hawks. He got the idea after hearing about the “secret burger” at Atlanta’s Holeman & Finch Public House. Every night at about 10 p.m., a Holeman & Finch staffer shouts, “It’s burger time!” through a bullhorn, starting a stampede for the 24 available burgers. Following that scarcity model, Hawks offers only 10 Reubens (made with house-cured and -smoked pastrami)—and only at night, starting at around 8 o’clock.

About a year and a half ago, Taste in Plymouth began serving an off-menu burger on Fridays at lunch. At first, it was a way to use up the leftover trimmings from the restaurant’s filet mignon. But the hamburger—served on a brioche bun with bacon and sun-dried tomato jam, sautéed mushrooms, arugula and goat cheese aioli, with a side of rosemary truffled fries—quickly became a cult dish with Taste regulars. One foursome comes in at least once a month for the burger, arriving when the restaurant opens at 11:30 a.m. so they don’t miss out.

Taste’s kitchen makes only a dozen or so burgers. Some weeks, they sell out in 10 minutes, says restaurant manager Micah Malcolm. Given its popularity, might Taste put the burger on the regular menu? No way, says Malcolm: “Then it wouldn’t be special.”