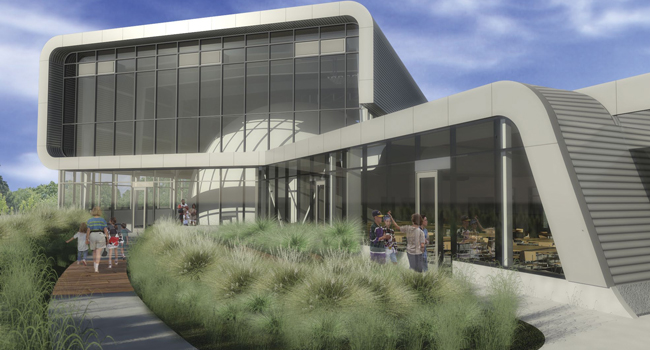 Sacramento’s downtown riverfront will be the site of major change in the coming year when one of the city’s longest-operating educational institutions, The Discovery Museum, breaks ground at its new Jibboom Street digs and eventually reopens as Powerhouse Science Center.

The Powerhouse aims to offer a museum-going experience on par with California Academy of Sciences in San Francisco and the Oregon Museum of Science and Industry in Portland. Museum leaders say they expect to welcome 250,000 visitors during their first year of operation in the new location.

“Our vision is to have a world-class destination science center where we can encourage young people to learn more about and get involved in careers related to science and technology, and where we can continue lifelong learning for people of all ages,” says Michele Wong, Powerhouse board chair and a longtime champion of the project.

The current museum lacks the space, outdoor connectivity, top-notch exhibits and architectural draw of a high-caliber science museum. The Powerhouse will change all that. Attractions will include an interactive space mission simulator called the Challenger Learning Center, a digital planetarium theater where astronomy displays and educational films can be projected onto a domed ceiling, classrooms and labs, and a cafe that will be open to the public.

The Powerhouse campus, which was designed by the award-winning Sacramento architectural firm Dreyfuss & Blackford, will include a dramatic rehabilitation of the former PG&E power station for which the museum is named and new construction of a modern, glass-encased building that speaks to today’s technology-rich environment.

“You need to put some value into your civic monuments. This is a civic monument of great importance to the area, and rightfully so, we are looking to celebrate that,” says lead architect Jason Silva.

He hopes to carry out that celebratory tone by preserving as much of the detailing and grandeur of the 1912 Willis Polk-designed structure as possible. “Because the volume of the building is so important to its character, we want you to be able to enter the building and see all the way to the top,” explains Silva. The addition of partial floors that will appear almost as mezzanines will help maintain the interior volume while also providing exhibit space.

Next door, the brand-new Earth and Space Sciences building will feature a wall of glass with views of the Sacramento River from the second floor. The ribbon-like roof plane and illuminated interior were designed to communicate the museum’s embrace of modernity and technology. “The new building largely becomes the beacon drawing attention to this site,” says Silva. “We really need something that has a presence.”

When the first of two phases of construction is completed (the target is fall 2017), the Powerhouse will stand at the northern end of a so-called museum mile punctuated by Crocker Art Museum to the south, with California State Railroad Museum and Sacramento History Museum in between.

The Powerhouse represents an important step toward transforming the city’s riverfront into a true destination for locals and visitors alike. “The river is really important to Sacramento. My personal feeling is that it is unappreciated and without celebration,” says Silva. “We don’t embrace it in ways that bring people to it.”

The Powerhouse campus, which sits next to the underutilized Robert T. Matsui Waterfront Park, is designed to provide ample connectivity between the levee and the museum grounds, giving people a reason to explore the riverfront and inviting visitors to linger on the landscaped grounds. The nearby levee will be “sculpted” to create terraced spaces where schoolkids and others can eat lunch during their visit. A separate riverfront project called the Hanami Line will include a walkable trail of blossoming cherry trees alongside the museum and beyond.

“We’re going to turn this into a very vibrant place along the riverfront,” says Harry Laswell, interim executive director of the Powerhouse. “The campus is designed to be open so that if you’re on the bike trail, you can stop into the cafe and get a cold drink.”

The challenge the Powerhouse board faces is how to raise sufficient funds to complete the project. Thus far, $34 million has been raised from corporate sponsors, government grants and other sources; $7 million more is needed to pay for the first phase of construction. A comparable amount will be needed to complete the complex and bring a years-long dream to fruition.

Wong believes that the science museum, once completed, will be a boon to the city. “I think it’s going to put focus on the fact that Sacramento has been hugely important in what we call the next-generation industries—things like clean tech and information technology and agriculture and health sciences and biotechnology,” she says.

Almost as important, the Powerhouse has the potential to reinvigorate a forgotten landscape near the downtown core. “Simply being an activator for the area is going to change things,” says Silva. “This is a project that is sorely needed in this end of town.”