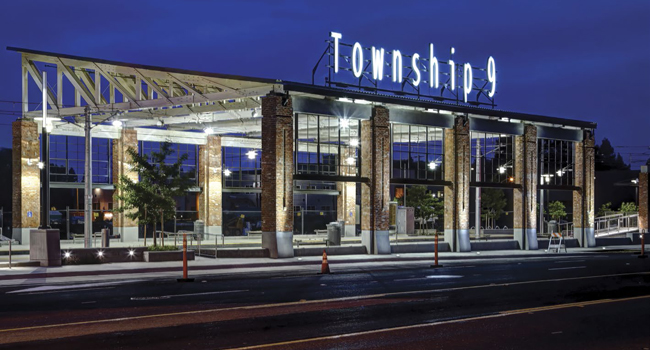 Imprinted on a high concrete wall inside the Township Nine light rail station is a quote from artist Wayne Thiebaud: “If you could just do it, there’d be no point in doing it.” It’s an apt sentiment for this transitioning industrial neighborhood just north of downtown Sacramento, where rugged warehouses are giving way to sparkling new residences, and where the path to redevelopment has been anything but easy.

Few people understand the journey of Township Nine better than Steve Goodwin. Goodwin and his business partner, Ron Mellon, purchased the former site of the Bercut-Richards cannery—65 acres along Richards Boulevard at North Seventh Street in the heart of the River District—in 2000. They saw potential in the parcel but were hardly blind to its shortcomings.

“The neighborhood was rough,” recalls Goodwin. “It was kind of like the land that time forgot. It was the light industrial part of town. It was not connected other than I-5 and 160. Seventh Street [connecting downtown to Richards Boulevard] hadn’t happened yet.” Homeless encampments dotted the nearby river levee. The relocation of state offices to downtown more than a decade ago was a blow to what little 9-to-5 liveliness the area had enjoyed.

Prior to purchasing the property, Goodwin and Mellon had been inspired by the urban villages and high-density, transit-oriented projects they had visited around the country while working for Nehemiah Corporation (a development partner in Township Nine).

“We knew that we wanted to get involved in that kind of development,” says Goodwin. “The problem was, where were we going to do it in Sacramento and when would the timing be right?”

When the cannery property went on the market, they felt they couldn’t pass it up. “We never had the intention of taking this big a bite of a development,” says Goodwin, “but you just don’t get many properties like this that come across your desk.”

As Goodwin and his colleagues began to share their vision for the site (a mix of affordable and market-rate housing alongside retail, all easily accessed by mass transit), they were heartened by the support they received. “We were fortunate that unbelievably great people with great energy levels wanted to see this neighborhood transition,” says Goodwin. “They embraced what we wanted to do immediately. From a developer point of view, that’s as good as it gets.”

John Cox, who has operated Sacramento Theatrical Lighting in the River District for more than a quarter century, saw potential in the River District long ago. “We knew when we came to the Richards Boulevard area it was kind of a diamond in the rough,” says Cox. “Because of its location geographically, we knew it would eventually be developed and basically become part of downtown.”

Indeed, the city’s plan is for Township Nine to serve as a northern gateway to downtown. Its proximity to the central city (it’s a mile and a half from Township Nine to the Capitol), the riverfront and the soon-to-be-developed railyards is an attractive feature that points to rejuvenating the area.

But shifting from a light commercial district to a bustling residential neighborhood doesn’t happen overnight. Goodwin and his colleagues have spent the past 15 years building partnerships with city officials, Regional Transit, fellow business owners and others to upgrade infrastructure in the neighborhood, extend light rail to the area and identify sources of public funding to develop the site.

“It was an infill piece that required a tremendous amount of money,” explains Goodwin. “We knew we needed help from somewhere.” It came by way of $30 million in Proposition 1C state bond funds, which can be awarded to encourage the construction of affordable housing and mixed-use developments located near transit stations. “Connectivity and transit are crucial to everything that’s happening in Sacramento right now.”

Securing a commitment from RT to build the Township Nine light rail station was therefore essential to the project. “With this station, RT wanted to make a first gesture toward the airport,” says Goodwin, “and from that day forward, we never looked back. We were able to say we are a true transit-oriented development.”

He credits city staff and elected officials for helping thrust the project forward. “I can honestly say that the city of Sacramento has been one of our greatest assets in terms of getting the development done, and I don’t say that lightly,” says Goodwin. “They have been there for us every step of the way.”

Today, Township Nine boasts one completed residential project, with many more to come. Cannery Place Apartments, a 180-unit midrise building of affordable one- and two-bedroom dwellings, opened earlier this year and is operating at full capacity. A tidy pocket park adjacent to the apartments welcomes neighbors and visitors alike.

Goodwin is working hard to attract retail businesses to the site. A coffeehouse, hair salon, fashion incubator and bike shop are all in the works. The cafe, Goodwin asserts, “is going to be a great little place for people to congregate,” noting that there is currently no coffeehouse serving the River District.

Of the bike shop, which will be operated by the owners of College Cyclery, Goodwin says, “Nothing says neighborhood like a bike shop.” In fact, behind the apartments is a temporary dirt-bike track where Goodwin hopes riders will come for recreation before permanent structures are built over it: “I want people to come out and get to know the area.”

Goodwin says finding the right mix of retail to serve current and future residents is important to him. “I love trying to fill this place with innovative Sacramento people—people who want to make a difference in helping redefine what this city is and can become over the next 20 years.”

Meanwhile, plans are moving forward on the multifamily dwellings and detached townhomes that will fill out Township Nine in the next three to eight years. Local firm LPAS will serve as the architect for the townhomes, while Popp Littrell has been tapped to design their interiors. Future amenities including a park, amphitheater and pedestrian walkways and bike paths have been designed to draw residents outdoors.

In spite of the promise of the good life at Township Nine, a skeptic might question whether urbanites will be drawn to purchase homes in an area that boasts so few established neighborhood amenities—restaurants, nightlife, cultural institutions—compared with other residential infill sites under construction in the city.

Goodwin, however, is convinced that top-level design and construction at Township Nine—along with being located just two light rail stops away from the new sports and entertainment arena—will be enough to lure new residents to this neighborhood in transition. As he puts it, “It’s all about quality and connectivity.”