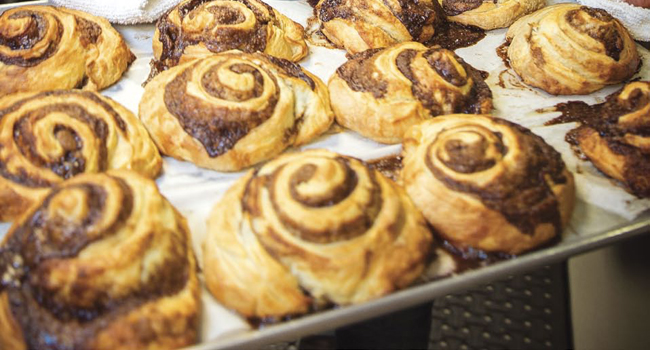 Nena Rasul, 36, has been head baker at Bacon & Butter for scarcely a year, but she’s already put her original stamp on Billy Zoellin’s comfort-focused menu. Rasul, former head pastry chef at Mulvaney’s B&L, still turns out perennial best-sellers like the fruit-and-bacon fritters and cinnamon rolls that were on the menu before her arrival, but she’s added new favorites including sugar biscuits and bacon-chocolate chip cookies to the baked-goods lineup. We talked with Rasul recently about her early baking experiences, her sources of inspiration and the letdown of modernist desserts. I started baking when I was in fifth grade. One of my favorite memories was getting a Hershey’s chocolate book from a school book sale and me and my brother attempting to make chocolate cake from it. He told me to put in a tablespoon of salt instead of a teaspoon. We made my sister eat the batter.

I left Mulvaney’s so that I could concentrate on making breakfast pastries because I hadn’t done them in a while. Billy let me run with my ideas. He’s always trusted my skills. We kept the fritters and cinnamon rolls because those were staples—although my cinnamon roll is different; there are no nuts or raisins. But I’ve added some new things that have been popular with customers, like the sugar biscuits.

My family is Mexican and East Indian, so we used to turn tortillas and rotis into cinnamon chips all the time. That was one of our favorite things to eat. Growing up in Sacramento, I’ve had the luxury of all these wonderful different cuisines because we are a huge melting pot here. As a baker, I like to take two different cultures and mix them together. I do a German chocolate baklava that’s so good.

I really like to use alcohol when I’m cooking down fruit for pies. For my apple pies, I will use a bit of chardonnay. It brings out some crispness in the Pink Lady apples. When I made the filling for my cherry turnovers, I used a cherry cider that we had on tap. The flavor is a little adult but still brings you back to your childhood.

Even when I was working at Mulvaney’s, the desserts always had a touch of hominess. I found out that, while people like pretty desserts, they really crave home-style desserts. That homey style is really indicative of Bacon & Butter. I truly believe that people want to take a bite of something that brings them back to a time in their life or to a feeling of comfort. Those new-wave desserts . . . they’re beautiful, and I understand the concept behind them. But you want to say, “That was warm and gooey. Oh my God, that was so good!”