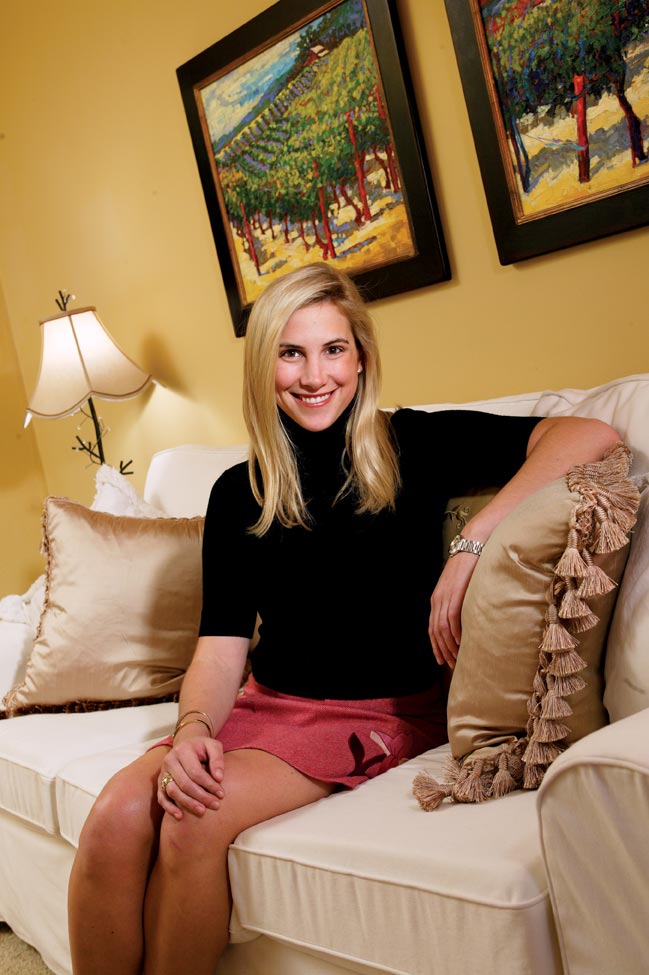 How do you know you’re all grown up? When you furnish your first home.

It’s exciting and not a little scary: After years of living in your parents’ home and maybe a dorm, you’re in charge of your own space. Now, you get to make all the decorating decisions&emdash;and, of course, pay for it yourself.

Chances are, you don’t have a lot of money or decorating experience. How do you create a stylish, comfortable home that represents you?

That was the dilemma facing Ashley Dyer, a 26-year-old public relations executive with Runyon Saltzman & Einhorn Inc. After graduating from college in 2001, the Sacramento native went to work in Washington, D.C., for the Bush White House and later, in New York, for the president’s re-election campaign. During that time, she lived in a succession of shared houses and hotel rooms.

Shortly after returning to Sacramento in late 2005, she found her first real place: a two-bedroom rented cottage in an established city neighborhood.

This is my first grown-up place by myself, says Dyer. When I came here, I had no furniture and not a lot of money.

But through some savvy shopping, she created a place she’s happy to call home.

First things first: the living room. Dyer needed some stylish seating. She found what she wanted&emdash;a slipcovered three-seater sofa&emdash;at Crate & Barrel. The price tag, however, was a little daunting: $1,400. So she headed over to Ikea, where she found a similar piece for only $599. She picked up a matching chaise ($300) and ottoman ($100), which does double duty as a coffee table.

She also found a dining table and four chairs at Crate & Barrel that cost a budget-busting $1,500. Thanks to an Internet special, she saved $500 by ordering them online rather than through the store.

To give her cottage some zing, Dyer got permission from the landlord to paint the white walls a warm camel color. Then, she accessorized with throws, pillows and rugs from places like Target and Wal-Mart, along with hand-me-downs from her mom and her mother’s friends.

You can find affordable art at Sacramento’s Second Saturday events. If you love it, buy it, Holben says. You may discover the next Picasso.

2. Don’t try to do it all at once.
It’s a process, says Holben. There’s fun in the hunt. I tell my clients, even those with lots of money, not to buy everything immediately. Your home will have more character if you furnish it over time.

3. Paint the walls.
Paint is cheap, Holben says, noting that many landlords will let you paint their boring white walls. (Note: They may require you to return the walls to white when you leave.)

4. Search for deals online.
The Internet is a phenomenal resource for inexpensive furniture, says Holben. She recently purchased a knockoff of an Eero Aarnio globe chair&emdash;a pricey midcentury-modern masterpiece&emdash;on eBay for peanuts. The average person wouldn’t know it’s not an original, she says.

5. Invest in a good sofa.
Buy the best you can afford: It will be more comfortable and last longer than a cheap sofa. Look for a hardwood frame and eight-way hand-tied construction.

6. Be creative.
You can transform just about anything with a can of spray paint: furniture, appliances, tile countertops, even bathtubs. (It would be a good idea to check with the landlord on this, too.) The Home Depot holds free seminars on how to prep and paint surfaces.

7. Buy a signature piece.
Don’t source everything from a single store such as Ikea, says Holben. Make a splash with an unusual piece&emdash;a modern chair or a fabulous antique sideboard&emdash;that expresses your personality.

8. Don’t rely strictly on your mother’s hand-me-downs.
You don’t want ’em any more than she does, the designer says. Plus, You run the risk of your place looking like your mother’s.

9. But if she’s giving away an old sofa, grab it.
If it’s well-constructed and you like the lines, have it reupholstered. Choose a fabric in a solid, neutral color and use patterned fabrics on throw pillows, Holben advises. Your tastes will change, and it’s cheaper to replace pillows than a whole couch.

10. Go to garage sales.
You can pick up somebody else’s furniture and accessories for a song. Become aware of brands, Holben says, so you’ll know a bargain when you see one.

11. Splurge on bed linens.
I’m a snob, says Holben. I like to sleep on something nice. Look for 100 percent cotton linens, which last longer and don’t pill. Tuesday Morning is a good place to find $500 linens for next to nothing.

12. Finally, take care of your things.
You paid for them, says Holben, so make sure they last.