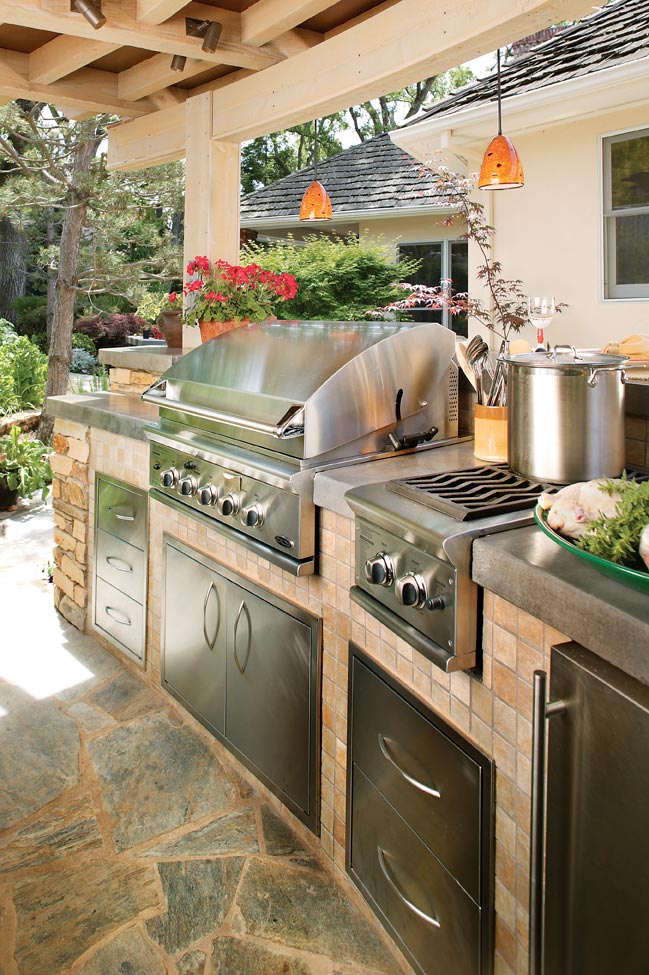 The days of the charcoal-powered barbecue are over. Take a look at the new outdoor kitchen.

Sacramento attorney Greg Thatch had a perfectly serviceable portable gas barbecue in the backyard of his Carmichael home. But something, he felt, was missing.

So earlier this year, he built an outdoor kitchen with all the bells and whistles: humongous built-in gas grill, two side burners, pizza oven, ice maker, refrigerator, sink, stainless steel storage drawers. You name it; he’s got it.

It’s something I looked at and thought about for a long time, says Thatch. Finally, I decided to pull the trigger.

These days, a lot of people in the Sacramento region are pulling the trigger on fancy outdoor kitchen equipment. Everybody’s doing it, says Mike Gustafson, a senior salesperson at Appliance Solutions Barbecues & Outdoor Kitchens in Sacramento.

Well, maybe not everybody. But there’s no denying that barbecues and other outdoor appliances are hot right now. According to the national Hearth, Patio & Barbecue Association, 2006 was a banner year for the U.S. barbecue industry, which shipped more than 17 million grills, up 15 percent from the previous year.

Every year, the industry gooses demand by coming out with bigger, better, more powerful products. Many of them mimic the professional-style kitchen appliances found inside the house. The theory: Once you’ve gotten used to cooking on a six-burner, dual-fuel, stainless steel range in the kitchen, you don’t want to mess around with a dinky little portable grill in the backyard.

Today’s high-end grills are marvels of engineering, made of heavy-gauge stainless steel and with multiple burners that pump out tens of thousands of Btus. And they multitask: Some come with a rolled-steel griddle for making eggs and pancakes, others with a sear zone for burgers and steaks or an infrared burner for intense heat. Rotisseries now are standard on many high-end grills, and most come with halogen lighting, either built into the hood or attached to the rotisserie apparatus, so you can see what you’re cooking. Some even have a built-in smoker.

OCI recently began selling a drop-in grill with a vanishing lid for buyers who don’t like the bulky appearance of a traditional hood. It gets rid of the big canopy, so it doesn’t interrupt your sightline, says Hood, who compares the concept to an infinity-edge pool.

The grill is just the starting point for the tricked-out backyard kitchen. You can buy side burners to cook things like vegetables and pasta; warming drawers, with settings to keep foods moist or crisp; built-in steamer and fryer baskets; and Sterno-powered drop-in compartments that keep buffet foods warm during
serving. Viking recently introduced outdoor ovens&emdash;both gas and electric.

You can even find paper-towel holders, tilt-out trash cans, storage drawers and cutting boards with built-in trash chutes specifically made for outdoor kitchens.

Outdoor refrigerators and ice makers are popular, too, although some experts advise against them in the superhot Central Valley. Refrigeration and ice making don’t go with 100-degree temperatures, warns Hood. An ice machine needs an ambient air temperature of 70 degrees to work properly. Instead, he recommends a drop-in cooler: an insulated compartment that holds ice and keeps food and beverages cold.

Several manufacturers offer cocktail centers, complete with sink, ice cooler and bar accessories such as a built-in bottle opener, cutting board and compartments for drinks garnishes. If you do a lot of entertaining, you might want to splurge on an outdoor beer dispenser (also known as a kegerator).

And to make the outdoor kitchen more comfortable, there are heaters, fans and misters. Some people even install sound systems and flat-screen TVs.

At this rate, the outdoor kitchen may someday make the indoor version obsolete.

Thatch certainly seems to think so. I can cook a complete meal out here without ever having to go inside, he says.