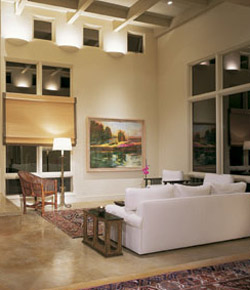 With the help of some designing friends, a Carmichael couple builds a Zenlike retreat.

When local artist Pat Mahony met residential designer Brent Smith at a mutual friend’s 60th birthday party, the two instantly hit it off. Each, it turned out, was familiar with—and had long admired—the other’s work. Later, Mahony took her husband aside and said, “I’ve found the guy to design our house.”

And with that, Mahony and her husband, commercial real estate broker Randy Getz, embarked on a nearly decadelong project to build the house of their dreams. The couple, longtime art collectors, had been living on Garden Highway in an ultramodern glass-and-steel structure that looked, says Mahony, “like a museum.” It was beautiful but chilly, and it lacked wall space for displaying the couple’s impressive collection of works by local artists such as Alan Post, Yoshio Taylor, Ann Mueller, Dan Corbin and Boyd Gavin.

So the pair purchased a half-acre lot in Carmichael overlooking Effie Yeaw Nature Center. It posed significant design challenges: The sloping property was bisected by a creek—right where the living room was destined to sit. Knowing the landscape would be a major consideration, Mahony and Getz hired Andrea Cochran, an award-winning Bay Area landscape architect. To complete the design team, they brought local interior designer Nikke Van Derheydt-Sosnick on board.

The first order of business was to design a timeless house that would marry modernity with warmth. Smith was in charge of the big picture, Van Derheydt-Sosnick the details. Cochran was on hand to make sure that the landscape was an integrated element, not an afterthought (as it so often is, even with custom homes).

“We wanted the interior and the exterior to work together,” Mahony explains.

Smith came up with a design that features a 2,700-square-foot house and a 700-square-foot studio for Mahony. To expand the living space, he added courtyards and patios off virtually every room. Because the rooms are not enormous, the outdoor spaces “make them seem twice as large,” says Van Derheydt-Sosnick. Smith, who died in 2002, took a Zenlike approach to creating the simple, almost austere interiors. From the entry, two stair steps lead down into the living room, which features an unobtrusive fireplace and a long expanse of wall for Mahony’s large-scale piece, “Merrium at the River.” A Japanese frieze hanging on a wall high above eye level conceals access to the home’s mechanical systems.

In the dining room, floor-to-ceiling windows overlook a sculptural garden of ornamental crabapple trees laid out on the diagonal in a grid pattern. A concrete runnel passes through the orchard, allowing water from the creek to trickle through the garden.

In the kitchen, an asymmetrical barrel ceiling adds architectural interest to the functional space, and skylights piercing the ceiling bring in added light. A patio off the kitchen features a fireplace built into the side of the house. “We can light it and enjoy it even while we’re inside,” Mahony says.

The house has only two bedrooms—one for the couple, another for their 10-year-old daughter—but Smith designed the music room and the den as self-contained suites, each with its own bath, so that they could be used as bedrooms if necessary. “Brent wanted every room to have multiple purposes,” Van Derheydt-Sosnick explains.

The interior designer intimately was involved in architectural decisions as well as decorative ones, consulting with Smith and Cochran on everything from the design of the courtyard walls to the crisscross ceiling beams in the den.

She also came up with a few ingenious solutions all her own. In the small entry, she advised against a built-in coat closet, arguing it would take up valuable space. In its stead, she designed a wall-mounted metal sculpture that doubles as a coat rack. “It’s useful and fun to look at,” she says.
In the kitchen, she designed a freestanding china cabinet that coordinates with the built-in maple Shaker-style cabinetry and granite countertops. For the breakfast area, she found an ancient (and pricey) teak-plank farm table and paired it with moderately priced leather-seated chairs from Crate & Barrel—an example of her high-low style of decorating.

Throughout the house, the floors are made of stained, acid-washed concrete. Mahony panicked when the concrete began cracking—an unavoidable hazard of concrete floors. But the designer was unfazed. “Why don’t we name the cracks?” she said playfully, and they did, naming them San Andreas, Loma Prieta, etc.

Mahony, whose show Absence of Color opens this month at the John Natsoulas Gallery in Davis, layers paint on canvas to give her art a three-dimensional quality. Likewise, in designing a house for Mahony and Getz, Smith, Van Derheydt-Sosnick and Cochran layered detail upon detail to create their own work of art.

“It was a long process,” says Mahony. “But it was worth the wait.”