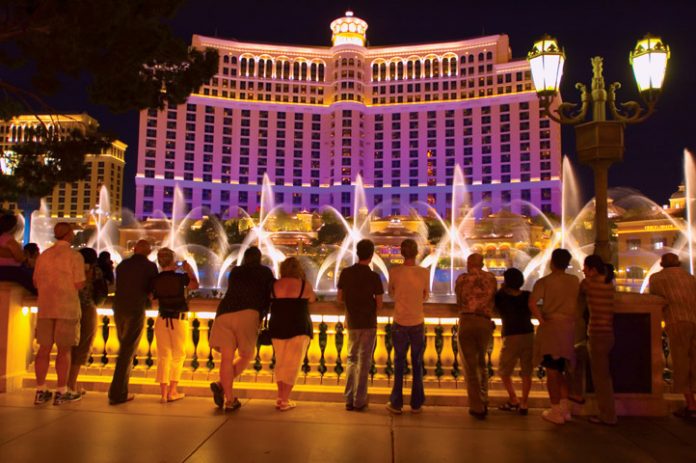 Or: How our family’s love affair with Sin City faded once our daughter learned to read.

Our daughter vacationed in Las Vegas twice before she ever set foot in Disneyland, and we’re not ashamed to admit it. By age 4, she could tell you where Elvis and Priscilla tied the knot (in the wedding chapel at the original Aladdin hotel) and debate the merits of the Strip versus Downtown.

We planned our third family trip to Vegas for this past December. At the dinner table, it became a nightly ritual to debate which buffets to hit, whether we’d go to the top of the Eiffel Tower again or pay good money to float down the canals at The Venetian. It never dawned on my husband, Michael, or me that we were anything but fun-loving anti-snobs, teaching our only child that kitsch, too, has its place in the world.

Then we arrived in Vegas&emdash;late on Christmas Day, in fact&emdash;and realized we had overlooked a disturbing development since our last trip: Fiona had learned to read. And things we didn’t want her to read were everywhere: strip-club handbills littering the sidewalks, ubiquitous mobile billboards plying the Strip with Ã¼berbusty women and too much boldfaced type. Heck, there was even escort-service advertising in the toilet stalls.

Well, duh, some of you may be thinking. They don’t call the place Sin City for nothing. Anyone who has followed travel trends for the past five years or so knows the casinos have done an about-face on the family-friendly marketing pitch that pervaded the ’90s.

I, too, once looked down on all things Vegas, mystified that anyone would choose a parched, artificial construct over more culturally significant travel spots like San Francisco and Chicago. Then I met Michael: unabashed Mafiaphile, dedicated player of craps and poker, aficionado of all things Rat Pack.

My own parents were frequent Vegas weekenders in the late ’50s and ’60s, driving in from Orange County for the nightclub acts and fancy dinners. My dad and my husband would talk for hours about Louis Prima, the Jewish mobsters who shaped the Strip and the swank (and since-demolished) hotels whose names now mainly crop up on eBay.

Michael’s passion for the place was infectious. Simply put, to love him was to love Las Vegas. On our first trip in the mid-1990s, we stayed at The Mirage, legendary Vegas hotelier Steve Wynn’s first property on the Strip. Nothing fancy, but centrally located: Our 18th-floor windows looked down on the volcano and its hourly eruptions.

My first Vegas meal was a tasty late-afternoon, wood-fired pizza at Wolfgang Puck in the MGM Grand. And one of the best meals I’ve ever had took place later that weekend: a five-course dinner at Emeril’s New Orleans Fish House, replete with wine and beer pairings. Details of what we ate that night elude me now (though I can’t shake the memory of my visibly unsteady balance on the way to the restroom), but I raved about that meal for years to come.

We visited Vegas many more times before Fiona was born, bunking at the Bellagio for the opening-month rate of $69 a night, giggling through the Liberace Museum just off the Strip and trudging around the utterly unremarkable Stratosphere for the first and last time.

Michael shared my enthusiasm for bride-spotting, and I used my cut of his poker winnings on manicures and trinkets at the ABC Stores on Fremont Street. We even named our puppy after the Aladdin, calling him Laddie for short.

Our vacations couldn’t get any better, we thought. Then Fiona came of age.

She was 3 when we took her to Vegas for the first time. The National Oceanic & Atmospheric Administration later ranked July 2003 as the hottest month on record for the city. But the heat was manageable. We just did most of our sightseeing by 8 a.m.

No joke: Michael would crawl in from the casinos in the wee hours, while Fiona and I, both chronic early risers, would be out the door by 6:30 a.m., the 24/7 city ready for us. One morning, we were the first in line to take the elevator to the top of the Eiffel Tower. (At 540 feet, it’s half the size of the real deal.)

We were in and out of Paris in an hour. No passports, no transatlantic flights, no Gallic attitude&emdash;just enough culture franÃ§aise to whet Fiona’s appetite for the years ahead.

Our next trip was even more fun. Fiona was nearly 5, and Vegas in the spring is akin to the most pleasant summer day in Sacramento. We splurged on a swanky suite at Mandalay Bay. The whole family piled into the oversized tub each morning, turned on the jets and watched Sesame Street on the bathroom’s flat-screen TV.

Later on, we adjourned to the pool, climbed into our inner tubes and spent hours floating under the waterfalls on the Lazy River. One day we took Fiona to the Shark Reef aquarium at Mandalay Bay, then spent the afternoon pursuing her favorite itinerary: lunch at the Rainforest Cafe and a peek at the lion cubs, both at the MGM Grand, followed by a stop at the four-story M&M’s World entertainment complex.

We didn’t spring for any of the pricey shows, and didn’t have to. Our hotel room looked out on the Luxor, where we were treated every night to a bat-and-moth spectacular: a swarm of winged mammals and insects drawn to the light beam shooting skyward from atop the hotel pyramid. The Mirage volcano is anything but cheesy to a young child, and the musical fountains at Bellagio never failed to enchant.

Twenty months later, with Fiona nearly 7, we were ready for Round 3. We figured we were in for even more fun than our first two family visits: We no longer needed to accommodate The Kid’s naps, we’d have the place to ourselves (the reverence of Christmas and all), and we still had so many sights to conquer.

There are clearly many ways to spell w-r-o-n-g. As it turned out, we had to drive a totally knackered Fiona around town every afternoon (the old snooze-cruise trick). The holiday-week crowds made the buffet lines intolerable (though we solved that pickle by eating at off-hours and just twice a day, saving money and our tempers.) And the excitement of making new discoveries was offset by the efforts we had to make to distract Fiona from each risqu billboard and leaflet.

Then there were the buxom wenches and leering pirates of The Sirens of TI, Treasure Island’s free show, staged street-side several times a night. Given the show’s quasi-sexist bent and surplus of scanty togs, Michael and I were eager to hustle Fiona away and head back to the hotel.

She didn’t ask questions, just gaped at the micro-bikinis and suggestive poses as we dragged her down the sidewalk. Surprisingly, she never asked about the strip-club billboards, though we know she was reading parts of them.

Michael and I weren’t ready with any answers, either, and won’t be taking Fiona back to Vegas until we have some.