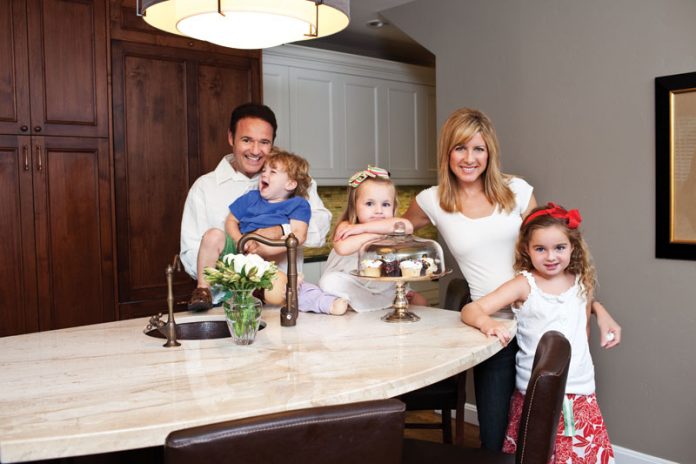 Three years ago, Walt Gray and Monica Woods moved into a vintage Land Park home—complete with an equally vintage layout. This past spring, the married broadcast-media couple renovated their galley kitchen, turned their “cozy” breakfast nook into a sleek home office and created a much-needed family-sized eating space that doubles as a playroom (or after-school project area) for their children: 21/2-year-old Joseph, 4-year-old Kelly and 7-year-old Abby.

“The No. 1 reason I picked a designer for the kitchen was I did not have time to research brands or appliances or cabinetry,” says Woods, who enlisted kitchen and bath specialist Steve Casci for the project. “I said, ‘Where do I place the cabinetry and appliances? What appliances are good? Can I trust the reviews I read online or from a salesperson?’ I needed someone who had done it before, who had gotten actual reviews from real customers and could tell me everything I needed to know.”

To unify the space, one of two doors leading to the kitchen went away, five walls were removed, a stairway was reconfigured and the washer and dryer moved upstairs. With three young children in the house, function trumped quaint. “There’s actually room to move around now—a lot of room,” Gray says. “The old kitchen had a table that was an octagon, and if somebody needed to get up, everybody had to get up. It looked great, but it didn’t function when you had five people at the same table.”

Woods and Casci selected solid materials with classic good looks: copper, granite, wood, slate, steel. Gray kept a rein on the budget. “My role? It was to say, ‘We’re not going to spend this much on that,’” he says. “I was that guy. You are absolutely looking to get the best possible thing you can do at the best possible price.”

One of Gray’s tips: Hire a local contractor. “In our case, that was C. Piati Construction. This guy was on time, on budget. Everything that Steve and Monica wanted was done. He lives in the neighborhood and would drive by. He was excellent.”

“The whole reason we moved to Land Park was because of the unique features of the homes here,” Woods says. “It’s not a cookie-cutter house, and the last thing I wanted to do was blow up the kitchen and take away its uniqueness and character. I wanted to keep it classic but updated.”

In many households, updating means adding a big-screen TV. And in a household headed by two TV pros, one would expect to find at least a tiny set somewhere in the new space. Wrong. “In Elk Grove, we had a huge kitchen which led right into the family room,” Woods says. “The TV took away from the whole family setting where you could sit and talk and not be distracted.”

Gray’s opinion about the tube? The same. “We’re a busy family, and when we all get together, there should be some nice discussion about what went on at school or preschool today,” he says. “That’s how we are. There’s a TV literally about 8 feet away in the family room. I could go either way with it, but if you have a TV on during meals, people will tend to watch it. Our house is enough of a circus without having everyone watching TV at mealtime.”