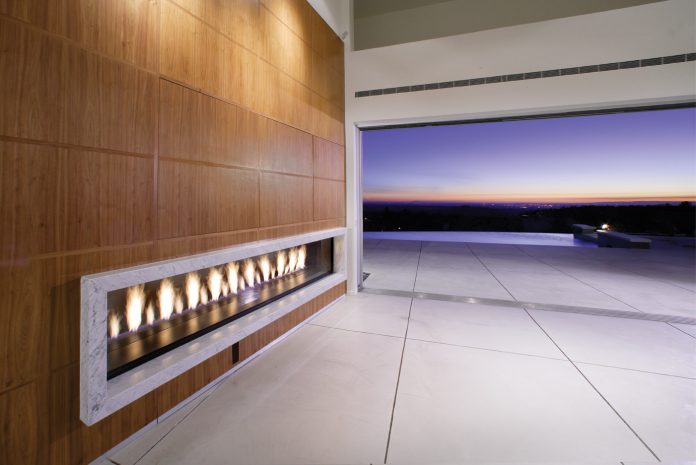 A cool, contemporary home blurs the boundaries between indoors and out

“I love this house,”   says Mary Gail Dorn as she stands on her pool deck and looks out into the distance. “It’s perfect. It’s astounding that we can sit out here and watch the moon and the stars. It’s such a treat.” While Mary Gail and Chuck Dorn’s sleek new custom contemporary home of concrete, glass and steel in Auburn is all about the view—you can see Folsom Lake and a very distant downtown Sacramento from all the rooms in the front—it’s also all about a calming interior with zero architectural clutter and nothing at all to disrupt a sense of boundless space, inside and out.

“I’ve always felt that a contemporary home should be on a hill; that has always been my idea,” Chuck says. “My mental picture of a contemporary-style home has a lot of glass and a fairly spectacular view—as much as you could possibly get. That was my ultimate goal.”

So getting every possible inch of view became Amador City-based architect Doron Dreksler’s goal, too. And key to Dreksler’s ingenious plan is that the Dorns will keep their views (and their privacy) even as their neighborhood grows up around them.

“The site plan was the launching point for the design,” Dreksler explains. “Because we were in a subdivision, a built environment where I had no control over what was going to happen, I laid out the worst-case scenarios for each of the lots around us,” he says. “In other words, the biggest house that could fill up every inch of the lots around us. That way, I could look around and in between those things from the Dorns’ house and ask how we could create something that was more dynamic than a typical front-to-back house.”

How did the Dorns react to that plan? “At first they said, ‘What are you doing?’” Dreksler says. “Then they said, ‘Oh, wow, we see what you’re doing. This is so cool.’” The pool and deck are completely private because they are about 14 feet above street level. And when it’s time for a swim, a soak in the spa or for taking a front-row seat at sunset, the Dorns simply slide away the immense glass wall between the living room and the deck. The result is a huge room with no barrier between inside and out. “The whole idea that we had for the house was to bring the outside in,” Chuck says. “It’s really like a room you’d see in Hawaii.”

Another way Dreksler blended indoor and outdoor spaces was with one of the home’s most striking architectural elements: a 148-foot-long, 11-foot-high and 8-inch-wide concrete-over-wood wall that starts at the far end of the driveway and travels unbroken through the length of the house. “It defines every opening in every room, from the inside to the outside,” Dreksler says, and in fact he oriented the house around it. To create the living and utility spaces, he rotated three rectangular “forms” or “masses” at 10-, 20- and 30-degree increments to the wall. The first form includes the two-car garage, game (or exercise) room and outdoor sitting room. The second has the single-car garage, kitchen, breakfast nook, dining room, secondary bedrooms and bathrooms and laundry room. In the third are the living room, powder room, library/sitting room and master bedroom and bath, all under a curved roof with curved ceilings in the major spaces. The layout enlivens the rooms and the proportions deliver visual continuity. “The scale allows you to rest in stasis,” Dreksler says. “It’s a beautiful form.”

In the kitchen, elegance and practicality reign. “It’s a one-cook kitchen,” says Mary Gail. “The one cook is me, and to me, function is key. If it’s a gorgeous kitchen but it doesn’t work, it loses its appeal. It would be almost like an adorable child that isn’t so well-behaved.” There’s a Wolf range, two wall ovens and a pantry with rollout drawers within a swivel-step of the main workspace—a seemingly seamless stretch of DuPont’s Zodiaq (an engineered stone) interrupted only by a deep stainless-steel sink. The “legs” of the island are integrated into the top. “That took some explaining to the fabricators,” Denham says. “I don’t know if they had ever done that before, but it turned out really well.”

Walnut paneling hides electronics in the living room, conceals walk-in closets and storage spaces in the master bath, and covers up the pantry and home office in the kitchen. Why walnut? “It’s a really pretty wood,” Denham says, adding that because the tones tend toward brown rather than red, they warm up to the palette of whites, blacks and grays.

“The (contemporary) style has been a constant for us,” says Mary Gail about other homes she and Chuck have lived in. “But in our previous home in Fair Oaks, we had lots of beautiful oak trees and we were downhill from the street, so we had just a little piece of the sky. Now that we’re at the top of the hill, it’s wonderful. It’s really like we’re rediscovering the sky.”