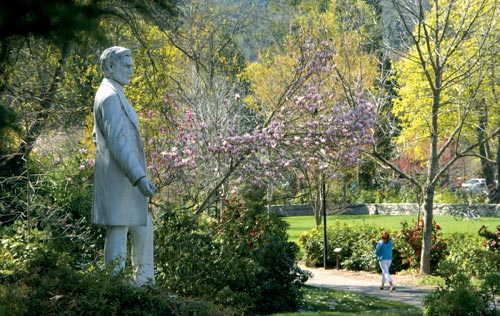 In Ashland, Ore., Shakespeare is big business and lots of fun.

You can see five plays here in four days. I did&emdash;for the fourth straight year&emdash;and loved every minute. Ashland’s Oregon Shakespeare Festival continues to be a feast for all the senses. And, with a thematic repertoire pervaded by high rollers, hard bargains and history, this year’s theatrical smorgasbord is richer than ever.

Ashland, a town of some 20,000, is host every year to the largest repertory theater in the country. Imagine 80 actors playing multiple roles in 11 different plays, but that’s just the tip of the iceberg. For every actor, there are three to four maintenance people in an eight-month season budgeted at $23 million. In Ashland, great theater meets big business.

Who would have thought it back in 1935 when the town’s hard-pressed city fathers racked their brains for something&emdash;anything&emdash;to bring in revenue. With the Depression at its height, no one thought much of Angus Bowmer’s suggestion: The crazy kid professor wanted to put on a weekend Shakespeare festival. A grudging town granted the young idealist $400 to mount the production, but only with the understanding that the stage also would be used for boxing.

Bowmer’s festival not only was an instant success, but subsidized the less popular afternoon boxing matches.

Today, Ashland encircles an elaborate entertainment complex that includes three state-of-the-art theaters in the town center. This mecca draws more than 120,000 people to the festival every year. What do they find? A lot more than Shakespeare. It’s true that the town’s high cultural expression is exemplified in its world-famous Elizabethan Stage. Covered in luxuriant ivy and open to the skies, this massive venue is the hub of both the festival and the town, but it’s only the beginning. The immortal Bard gets nightly competition from a variety of young, edgy, highly contemporary playwrights.

This year, the festival’s 72nd, opened with previews in February and won’t conclude until Oct. 28. And only four of the season’s 11 plays are Shakespeare’s.

Amy Richard, festival spokesperson, admitted to me, Our name misleads some people who don’t know yet what we are. If you’re thinking two weeks of Shakespeare in the summer, think again. Ours is a real festival experience, with backstage tours, lectures, classes, music and dance.

The lectures are invariably provocative, tied in some way to a production but still a surprise. My all-time favorite was on love, sacred and profane, inspired by A Winter’s Tale. I also make a special point of doing a backstage tour every year and always learn something new&emdash;possibly an insight, perhaps a new dramatic technique, invariably a telling anecdote. And, because of the egalitarian nature of the repertory company
itself, the morning tour guide is very apt to be last night’s leading man.

Maureen Messier, a Sacramento English teacher who’s been taking her high school students to Ashland for 25 years, shares my enthusiasm for backstage camaraderie. Hearing the actors’ insider perceptions has enabled her kids to understand what they see at a profound level and to experience the world of theater up close and personal.

It’s not easy in today’s educational climate to take field trips, she says, but Ashland is one that I will never give up on because of its impact on my students. Messier’s favorite story is of a senior with reading challenges. A production of Hamlet so enthralled the young man that he went out and bought the play to read on his own.

As a high school student growing up in Sacramento during the ’70s, Tim Bond also was inspired by theater. Participating in school plays and community productions eventually led to his present position as the festival’s associate art director. Today, Bond travels throughout the country searching for new talent. He’s proud that people of color comprise one third of the repertory company and looks for the same diversity in the audience. To that end, he is active in promoting theater tours where groups of African-Americans and Latinos travel from Sacramento to Ashland so they can see the shows and tour the town.

Bond directs one play every year. Currently, he is the guiding force behind the smash hit Gem of the Ocean. Bringing this mythical, magical play to life was a director’s dream. Imagine descending beneath the sea to a field of bones&emdash;the resting place of slaves. Sound scary? Perhaps a little morbid? In reality, what Bond has created is a beautiful ritual of words and music, a positive, vital and joyous celebration of life and freedom.

David Kelly, another Sacramentan, has been making good for 16 seasons at the festival. This year he again appears in two productions simultaneously. See him as the rollicking Touchstone, the court clown, in As You Like It or in dual roles in Tracy’s Tiger, one a policeman with a rich fantasy life, the other a coffee taster challenged by a curiously subverted palate.

Challenge and versatility are what it’s always been about for Kelly. He wouldn’t have it any other way. Obviously, the pace never lets up but that’s what repertory and the festival are all about.

Membership in the theater company is highly competitive. Actors are well-paid but work under year-to-year contracts, keeping all of them on their toes. Conceivably, an actor can work for 10 years and then not be rehired for the 11th. Graduate students are recruited for two- or three-year internships. At the end of that time, they have the opportunity to audition for membership. Most try and try hard.

Although the 2007 season is in full swing, plays have already been selected for 2008. Designs are on the drawing board for sets and costumes. Ashland, where the play is always the thing, is gearing up for its 73rd season.

Can a woman pretending to be a man make the man she’s in love with fall out of love with her? Does she really want to? Miriam Laube as Rosalind aces this Shakespearean farce. Through Oct. 28.

The Cherry Orchard&emdash;In this darkly comic family saga, flawed yet touching characters play at life while the real thing passes them by.  The production is a love affair with Chekhov. Through July 8.

On the Razzle&emdash;If you see only one OSF play, make it this one. Tom Stoppard’s joyous mayhem is truly dazzling. Through Oct. 28.

Gem of the Ocean&emdash;In the wake of Emancipation, social turbulence swirls about a black mystic who can unlock the secret of true freedom. By Pulitzer Prize winner August Wilson. Through Oct. 27.

Distracted&emdash;Fast forward! Instant play! What does it all mean? A young mother’s struggle to discover the reality behind the seeming catchwords attention deficit disorder opens July 3, closes Oct. 28.

Tracy’s Tiger&emdash;A tender story of a man, a woman and a tiger plays against the Beat world of the San Francisco jazz scene in this world-premiere musical. Through Oct. 28.

Taming of the Shrew&emdash;Shakespeare’s immortal battle of the sexes comes alive again June 6. Watch the sparks fly! Runs through Oct. 7.

Located about 300 miles north of Sacramento, Ashland is nestled into the foothills flanking southern Oregon’s Siskiyou coastal mountain range. The delightfully distinctive town, which got its start as a logging camp in the mid-1800s, still reflects this pioneer history and spirit despite its evolution into a full-fledged resort, thanks in part to the Oregon Shakespeare Festival. Some 40 hotels, inns and bed-and breakfasts cluster in the immediate area. My personal favorite: Ashland Springs Hotel (888-795-4545; ashlandspringshotel.com), because of its convenience, turn-of-the-century touches and fabulous restaurant, Larks. Two other goodies, because of their ambiance and location, are The Iris Inn (800-460-7650; irisinnbb.com) and The Winchester Inn (541-488-1113; winchesterinn.com).

As for dining, the Monet Restaurant and Garden (541-482-1339; restaurantmonet.com) never disappoints. Standing Stone Brewing Company (541-482-2448; standingstonebrewing.com) serves its own handcrafted ales and excellent food. For a low-key breakfast, lunch or dinner with creek-view seating, try Greenleaf Restaurant (541-482-2808; greenleafrestaurant.com) on the downtown plaza at 49 N. Main. And don’t leave Ashland without an ice cream cone from Zoey’s Cafe (541-482-4794), corner of First and Main.

Besides dining, theatergoing and browsing the many one-of-a-kind shops (think beads, books, boutiques) downtown, be certain to explore Lithia Park. The 93-acre woodland stretches along Ashland Creek well up into the foothills.

Ashland is in some danger of morphing into another Napa or Carmel. See it now, see it this summer, and allow yourself plenty of time to savor all of its charms. June, July and August are when the Shakespeare festival kicks into high gear, but plays are performed February through late October. For more information, log on to osfashland.org or call (541) 482-2111 for a brochure.