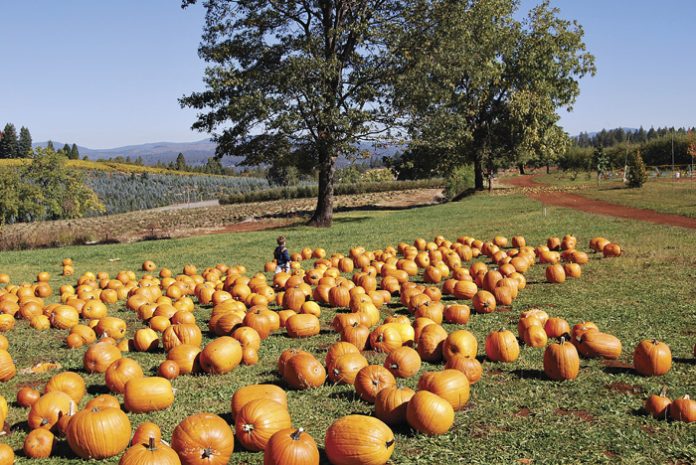 Take advantage of a rare brisk day this month and venture into a sun-soaked field at one of the Sacramento region’s pumpkin farms. Or, if the heat’s still on and that gray Indian summer haze smudges the horizon, escape to the Bay Area to hunt for your perfect jack-o’-lantern in the fog. Either way, it’s a fun day. Bring a box or two to keep your pumpkins from rolling around the back of the car on the way home, and plenty of small bills to pay for parking, admission and snacks.

Zittel Farms, Folsom
This small farm on a North Folsom corner charms visitors seeking a low-key pumpkin-picking experience. Take a hayride, wander among spent cornstalks and load a red wagon with pumpkins huge or teeny under the eyes of watchful scarecrows. Afterward, stop into nearby Coffee Republic for a smooth pumpkin latte—not too stiff, not too sweet.

Abel’s Apple Acres, Apple Hill
Go for the apple doughnuts—soft, cinnamony and, often, warm—then stay so the kids can negotiate the 500-bale hay maze and ride ponies. Shop for jewelry and pottery at the craft fair; you might find some cool tie-dye shirts, too. Grab a blob of pre-made pie dough for a baking project later in the day. On the way home, buy fall crops at Boa Vista Orchards, where tomatoes and robust squashes wait among the barrels of apples.

The Pumpkin Farm, Citrus Heights
Enter The Pumpkin Farm’s scarecrow contest and you could win up to $600. Get the bejesus scared out of you by Dracula and Frankenstein and his bride in the Haunted Barn, ride a slide or a pony, leap around a jumpy castle, creep through a corn maze and, whatever you do, don’t let the goats eat your shorts in the petting zoo.

Bishop’s Pumpkin Farm, Wheatland
One of Northern California’s largest pumpkin patches, Bishop’s is the first mentioned by almost all Sacramentans when asked about their favorites. With huge fields of pumpkins, a corn maze, food (barbecue, pizza, corn dogs and more at Pigadeli Square), pony rides and a petting zoo, Bishop’s keeps youngsters—and grown-ups—busy all day. Climb into a cattle car and ride the railroad, root for the pigs running races, check out the chicken show and watch the kids disappear into Coyote Mountain Mine, slide down chutes and pan for marbles in the creek.

Smith Family Farm, Brentwood
The $9 admission might seem steep until you factor in the parking spot, hayride, corn maze, musical entertainment and your choice of pumpkin from the vast fields at this East Contra Costa County farm outside Antioch. It’s a long journey for a pumpkin patch, but here’s the real reason to make the trip: tomatoes. Smith grows some 50 varieties of tomatoes, including heirlooms, and they’re still overflowing the bins at the fruit stand. People who can tomatoes or make gazpacho and salsa will unapologetically trek vast distances to Smith’s to amass their key ingredient when the quality’s this high. At least take a few late-season tomatoes home alongside your pumpkins.

Big Dogs—Oct. 4 is Bernese Mountain Dog Day at Farmer John’s in Half Moon Bay. Don’t have one of these furry, friendly, tricolored dogs? That’s OK. Come enjoy the pack that day anyway. Last year, some 60 Bernies showed up.