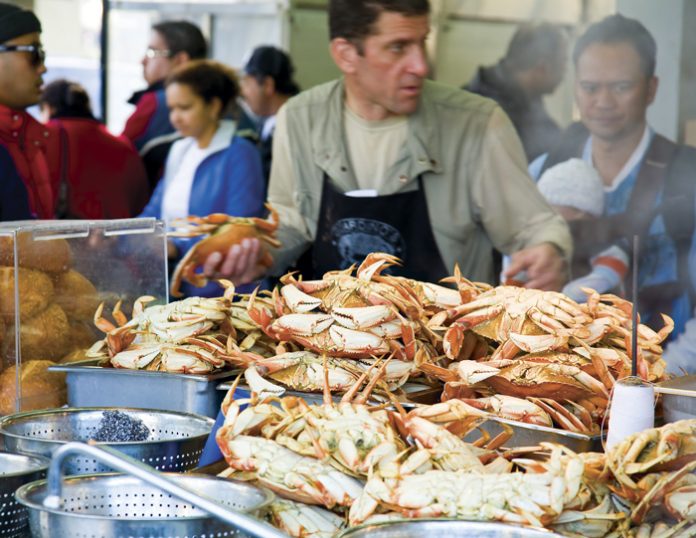 When Dungeness crab season opened to commercial fishing fleets in mid-November, expectations were grim: low numbers, small crabs. Yet within a week, tunes had changed as boats arrived loaded with small but hearty crabs—some barely squeaking by the 6¼-inch size limit, but gorgeous red and plump with meat. So celebrate the season by heading west. If your goal is to eat crab already prepared, options abound. If it’s to “do it yourself,” bring a cooler loaded with ice, where your live crab will sleep on the way home.

Fisherman’s Wharf, San Francisco
This tourist trap is the obvious choice when you’re seeking a crabby experience—for you and everyone else, that is. Bring a sense of humor, leave your crowd phobia behind and hold tight to your kids’ hands as you plow through the masses to get to the crab stands. Smell the fetid humidity from the boiling crab cauldrons on Jefferson Street, often tended by smart-mouthed men who speak more than one language—handy in these parts—and who sometimes dispense samples to curious onlookers. Cure your craving for deep-fried fish or chowder in a bread bowl at Fisherman’s Wharf, but place your order with a side of crab—boiled, cracked, dipped in butter and salty-sweet from the ocean.

Alioto-Lazio Fish Co., San Francisco
Just past the madding crowd on Fisherman’s Wharf, Alioto-Lazio Fish Co. operates out of a warehouse on Jefferson Street. Crowbar your car in by the roll-up door and venture into the dark, wet hovel where staffers wear rubber boots and pluck crabs out of tanks with gloved hands. This year, chatter among workers was peppered with gratitude—“[Crabs] might be small, but hell, they’re here, so we can make some money!” Prices here are good: $4.50 a pound for live crab the day we visited.

Aquarium of the Bay, San Francisco
Learn about Dungeness crab and other sea life at the Aquarium of the Bay, at the Embarcadero and Beach Street, where more than 20,000 aquatic animals live—most from the San Francisco Bay. Besides crabs, visitors will see sharks, octopus, rockfish, skates, rays and eels. Check out the sevengill sharks—the largest predators in the bay—and the skates, which populate the aquarium’s main display and lay hundreds of eggs every year. Displays show different stages of embryonic development, live, throughout the skates’ 8- to 9-month gestation before hatching.

Ferry Building, San Francisco
Go on a Saturday morning during crab season, and you’ll find all kinds of delights. The Ferry Plaza Farmers Market runs 8 a.m. to 2 p.m.—a boisterous gathering of farmers, seafood and meat purveyors, cheese and jam makers, and all types of foodies. The market is held outdoors (around the side and out back on the breezy docks), but start your tasting adventure indoors. From one weekend to the next, it’s guessy which establishments will give samples, but you can usually count on bread and olive oil, various chocolates, cheeses and cracker spreads. San Francisco Fish Company serves a Dungeness crab breakfast burrito ($10) that will settle your hunger for the rest of the day. Out back, somewhere between the stands of organic produce (Brussels sprouts on a stalk, anyone?) and homemade butter, you’ll find Shogun Fish Market, where you can get live crab ($6.49 a pound), crabmeat and other fresh local seafood.

Where To Get a Crab Dinner in San Francisco
While almost any Fisherman’s Wharf restaurant has Dungeness crab on the menu, Alioto’s is perhaps the most famous. With a view of the harbor, a menu with about a dozen crab creations and a reputation built on decades of San Francisco tradition, Alioto’s might seem too trite, but go anyway. In the Sunset district, Thanh Long, on Judah Street, specializes in “drunken crab” (cooked in Chardonnay, brandy and sake), best served with garlic noodles. It ain’t cheap—about 40 bucks per plate. For a fancier, dressier drunken-crab experience, go to Thanh Long’s sister restaurant, Crustacean, on Polk Street. Wear a collared shirt, guys, and leave the sweatshirts at home, as the dress code, posted on the window, is enforced. It’s an intimate, warm spot to consume your crab dinner—although you might feel a little goofy wearing a plastic crab bib over your finery.

Pillar Point Harbor, Princeton-by-the-Sea
About 20 minutes south of San Francisco near Half Moon Bay, the crab boats pull up to Pillar Point Harbor in the mornings, loaded with crabs caught out near the Farallon Islands and beyond. Follow the signs and walk the plank to the boat slips, and you’ll be treated to a mini version of “Deadliest Catch.” Crabs scrabble in holding tanks, while bib-wearing men—we didn’t see a single woman the day we were there—chat up customers and bravely plop the snapping creatures on the scales. Prices run $4 to $5 a pound for live crab, and this year they’re weighing about a pound and a half each. Packed on ice for the ride home, the crabs go dormant and rest, staying fresh for up to eight hours. If that’s not enough time or you’re not eager for your kitchen to smell  like Fisherman’s Wharf, for $2 a crab,  you can get yours cleaned, cooked and cracked at Princeton Seafood, a harbor restaurant that maintains a boiling pot
on its deck. Eat it there or ice it down for later.

The Scenic Route—From Fisherman’s Wharf in San Francisco to Pillar Point Harbor, the route to take runs past Fort Mason and Marina Green, past Crissy Field and through the Presidio, through Sea Cliff and out past the Cliff House to the Great Highway. Ogle at the waves crashing along Ocean Beach, then pick up Highway 1 south toward Half Moon Bay. Drivers, keep your eyes on the road, as mere inches separate the highway from the cliffs at Devil’s Slide. You’ll feel like you’re driving on the edge of the world—it’s a knee-weakening view sure to remind you how insignificant you, and your car, really are.