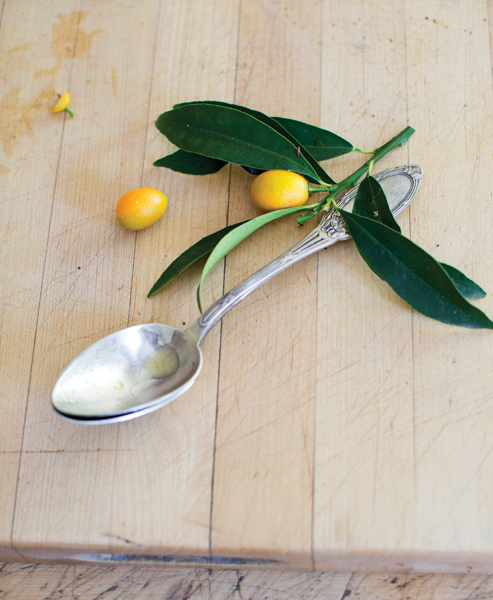 After more than 50 years, Georgeanne Brennan’s love affair with Provence still burns bright. The passion has been so strong that the cookbook author-food educator has created a lifestyle in rural Winters that echoes the famous French region, where she has a second home.

“Provence is really my second life,” she says, preparing to lead an outdoor tour of her homestead. “Living in the Provençal style is more about being than doing. By that I mean you’re out on walks or hikes, sitting at a cafe, finding joy in the first fava beans in the garden. It’s less about getting this and that accomplished, and more about being in the moment.”

Naturally, she and her agronomist second husband of 32 years, Jim Schrupp, have dinner at the Gallic hour of 7:30 p.m. or later, and breakfast is in the French style, too—coffee, toast and jam, and a piece of fruit.

Thirty years ago, Brennan and Schrupp didn’t hesitate to buy their 113-year-old Winters farmhouse on 10 acres when they spotted it.

“We tore out the interior and added a second story but kept the footprint, including the original hardwood floors,” she says. Now it’s a 1,700-sqare-foot country oasis fronted by a border of lavender, a hedge of Meyer lemon trees, and orange, persimmon, fig and olive trees. The rabbits and chickens are long gone, but a pair of doves lives there, and a covey of quail.

“You would find similar wooded entryways at farmhouses in Provence,” Brennan says. She leaves the entryway and moves into the “potager,” a year-round French kitchen garden. “At the same time you’re harvesting, you’re also planting. It’s a process,” she says.

“The notion is to cook with everything, so the garden feeds the kitchen. As much as anything, that reflects the Provençal way of living,” she says, bending to examine an artichoke plant. “It’s a place where visitors come to look and take home whatever’s in excess. It creates a sense of family, friends and community.”

Beds of tulips, sunflowers, iris, a French heirloom rosebush and a crape myrtle line one end of the garden. Seasonally, the potager will produce bushels of produce and herbs: cabbage, broccoli, fennel, eggplant, quince, shallots, saffron crocus, tarragon, chives and much more. Deer tracks wander through the 64-by-64-foot garden. In the distance, across the fields, beehives are set near a grove of 50 olive trees. Partnering with neighbors, Brennan and Schrupp harvest and press their olives and bottle the oil for her online marketplace of French-accented goods, La Vie Rustic (lavierustic).

Georgeanne Brennan first experienced Provence during a college study-abroad program in 1963. She returned in 1969 with her first husband, and in 1970 they purchased a farmhouse, raised goats and made cheese. They returned to California two years later to find jobs as high school teachers (she has a master’s degree in history), and they traveled to Provence each summer. Eventually, the couple divorced. As part of her Provençal adventure, Brennan ran a culinary-vacation program from a refurbished 17th-century convent. “I would take American guests shopping at the markets, and we would come back and cook.”

Life was good, but she wanted to be close to home when her first grandchild arrived. She still owns the farmhouse in Provence, though she’s in Winters most of the year. Now she and Schrupp visit France two or three times a year.

Brennan has written more than 30 cookbooks, bringing a lighter, more accessible style of French cooking to America’s home cooks. Among her honors are James Beard and Julia Child awards.

Her latest book, “Windows on Provence: Musings on the Food, Wine and Culture of the South of France,” a guided tour-memoir with spectacular color photos (Yellow Pear Press, $30) came out in April.

Inside the farmhouse, which feels comfortably lived in, it’s clear that the kitchen is the heart. Lemon-yellow walls glow with cheery natural light in a space crowded with standing racks of pots, pans and cooking utensils (including a wood mortar and pestle) and shelves of spices and herbs. “I have dishes, serving pieces and linens that remind me of Provence, and I use them on a daily basis,” Brennan says. “I’ll try to set up drinks and appetizers in the living room when we entertain, but everybody ends up in here. My style of living is about time spent with friends and family. Meals are for conversation at a nicely set table with flowers. ”

Dominating the space is a butcher-block island topped with scarred wood salvaged 50 years ago from Chulick Market in Winters, a La Cornue French range and a brick fireplace.

The fireplace was an add-on during the renovation. “It was really important to me, reflective of having the fireplace in my kitchen in Provence,” she says. “The farmhouse kitchens in Provence are like this one, with cooking and living in the same area.”

Brennan produces a duck/smoked ham/white bean cassoulet for a taste. “The secret ingredient is savoy cabbage,” she says with a smile. When time permits, she forages for mushrooms in the woods and mussels along the shores of Bodega Bay. “And I’m learning about edible seaweeds,” she says. Pickling and preserving is another pastime—olives, cucumbers, fennel, carrots and Meyer lemons harvested just outside the front door. “We should have a big crop of morels this year, and on my list is to make blood-orange marmalade.”

The living room is filled with vintage furniture, framed watercolors (two by Brennan herself), mementoes from her travels, and a custom-built floor-to-ceiling bookcase devoted mostly to cooking and travel. More books are heaped on the floor, on the sun porch and in her office. Picture a tornado inside a public library.

She estimates her cookbook collection at more than 1,000 titles, and there are more in France. “I have friends whose books are alphabetized and all in one place, but I am not that person,” she says. “I guess I’m more organic.”

The living room furniture and antique lamps have a sense of history and dignity. Some of the pieces came from Schrupp’s ancestors, such as a massive dining table and walnut chairs from his great-grandparents’ Martinez ranch house. Over here is an art-deco oak buffet, over there a Second Empire couch, both brought home from flea markets. “This is the kind of sensibility you would find in Provence—the furniture passed down through generations, the past incorporated into the present,” Brennan says. “Everything has a reason to be here, as opposed to the ongoing sense of, ‘OK, let’s buy something new.’” The place to be in the soccer-field-size “backyard” is in a chair underneath the 400-year-old black walnut tree, flanked by rosemary and lavender bushes, with a view of the grape arbor.

The chandelier and strings of party lights in the tree limbs are left over from the last wedding, which brought 250 guests.

“Outside events have ranged from weddings, family gatherings of 40 to 60, family holidays of 10 to 20, an olive-harvest lunch for 10, and sometimes a quiet meal for just the two of us,” Brennan says.

She pauses for a moment, then adds, “Over the years, this way of living has resonated with me. It’s something I’m at peace with.”