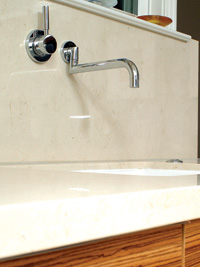 A little more than a year ago, I wrote in this magazine that you can’t build a high-end kitchen for only $30,000.

Local designer Curtis Popp read that story and thought it was “ridiculous.” So he set out to prove me wrong.
His test case: the kitchen of a 1920s Land Park bungalow. Homeowner Stewart Rosen wanted to gut the ancient galley kitchen, expand the space and add beautiful cabinetry and top-of-the-line appliances. Could Popp do all that on a budget of $30,000?

Yes, if Rosen was willing to make tradeoffs. “It’s not how much money you spend; it’s how you spend it,” explains Popp, owner of Shelter Design Studio. “You have to get creative.”

His goal was to create a custom kitchen that was tailored to Rosen, the owner of a repair shop specializing in exotic cars: Bentleys, Jaguars, Rolls-Royces. Says Popp: “He likes classic things that are handmade and modern—but funky modern, not high-tech modern.”

To start, builder John DiDomenico of DiDomenico Construction tore out a pantry to enlarge the room, then constructed a 2-foot-deep soffit over the cooking and prep areas. “It gives the kitchen a built-in look,” Popp explains. The soffit also contains recessed task lighting.

In order to get the expensive appliances Rosen wanted, Popp knew he’d have to cut corners elsewhere. Custom cabinetry is the single biggest expense in a kitchen remodel, so the designer went looking for an inexpensive alternative. His ingenious solution? Buying off-the-shelf modular cabinets from Ikea and replacing the doors with custom-made ones.

Cabinetmaker Bob Briscoe, owner of Haush Modern Millwork in Sacramento, removed the white melamine doors from their frames and used them as templates to build new zebrawood doors that are reminiscent of a vintage Bentley’s burled-wood dashboard. The price tag: $800 for the cabinets, $4,500 for the custom doors. Then Popp bought stainless-steel-bar door pulls from Ikea—just $4 apiece. (Similar hardware from a high-end company cost an eye-popping $175 per pull.)

“Custom cabinetry would have set us back at least $20,000,” says Popp. “We saved about $15,000.” And, as Popp points out, Ikea cabinets have many of the same design features—drawer slides and shock absorbers, nicely engineered German hinges—as more expensive made-to-order cabinetry.

As for the appliances, Popp chose only the best. But to keep costs down, he bought the smallest versions of each: a 27-inch Sub-Zero refrigerator, 18-inch Miele dishwasher and 24-inch Aga stove. Because Rosen is single and his kitchen is small (only 130 square feet), the slender appliances were an appropriate choice.
Then the designer figured out budget-conserving ways to use pricey materials such as handmade ceramic tile, marble and travertine.

To make a big impact in the tiny kitchen, he employed handmade Heath tile very sparingly, creating a small but arresting backsplash behind the range with cream and brown tiles shaped like diamonds and bowties. He painted the rest of the backsplash an earthy brown, saving a big chunk of money in the process.

For the countertops, Popp shopped hard for the best price, eventually buying two slabs of Crema Marfil marble on sale for $400 a slab. “We used every bit of that marble,” he says, laughing. He also found 16-by-16-inch travertine floor tiles on sale for $4 a tile.

Popp and Rosen scoured the Internet for bargains, buying the sink and wall-mounted Dornbracht faucet—the “Rolls-Royce of faucets,” according to the designer—online. They didn’t always purchase online; sometimes, they used their Internet research as leverage when negotiating with local suppliers. “It’s a great way to compare prices,” Popp notes.

Ultimately, Rosen ended up spending about $35,000—$5,000 over budget. But he ended up with a custom kitchen that looks like it cost twice the price.

And as someone who loves affordable design, I am happy to say that Popp proved me (almost) wrong.