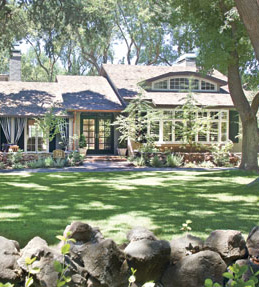 A who’s who of Sacramento interior design plans a showhouse for charity.

The “Old Guard” of Sacramento’s interior design community is joining forces to put on a decorator showhouse this month.

The 20 or so designers represent the cream of Sacramento’s design world. Most of them got their start here in the 1970s and ’80s, and throughout the past quarter century they individually have designed some of the region’s finest homes.

For the showhouse, they’re decorating a sprawling English cottage-style house on Crocker Road in Sierra Oaks Vista. Proceeds will benefit Sacramento Crisis Nurseries, which provides temporary care for children whose parents are under stress.

The idea for a showhouse came from Paulette Trainor, an interior designer who is a member of Friends of the Sacramento Crisis Nurseries.

She was working on a remodel with Crocker Road homeowner Robin Gay and thought the home would make a great showhouse to benefit her pet project. So she got on the phone, called all her design buddies and asked if they’d help out.

Many of them hadn’t done a showhouse in years.

Often, designers participate in showhouses to market themselves and drum up business. This well-established bunch hadn’t needed to do that in a long time—they all had more than enough work. (However, some community-minded designers, like Joyce Hoshall, are regulars on the local showhouse-for-charity circuit.)

“I don’t usually do these things,” says Brown, also a Friends of the Sacramento Crisis Nurseries member. “Many of us don’t. We’re doing it for the nurseries.” In the past, Trainor and Brown have taken on projects to benefit the charity, including decorating a room in the south area nursery, designing the interiors for the north area nursery, and coming up with a general plan and color palette for future Sacramento-area nurseries. Two years ago, the pair won a People Helping People “Unsung Heroes” award for their efforts.

Trainor modeled the event on the famed San Francisco Decorator Showcase, which attracts the city’s top design talent and spotlights stellar interior design. “We have the talent and connections to pull it off,” she says.

The grand 4,000-square-foot house, built in the 1920s, has been completely redone for the show. The 1-acre grounds, which also will be on the tour, include several courtyards plus a gazebo, cabana, pool and grass tennis court.