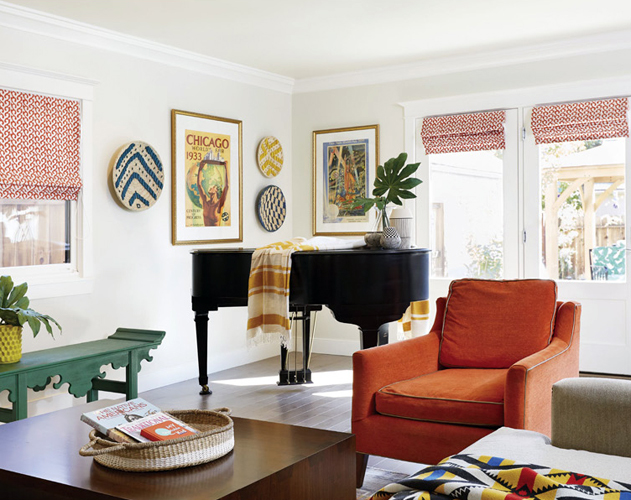 HOW DOES ONE SUCCESSFULLY MIX Arts and Crafts, Colonial, Native American, Asian and African design disciplines? It definitely takes intrepid tastes and great talent. But it also takes trust.

When Joan Ingoglia Schubert and her husband, David, purchased a Land Park home that needed renovations, Joan was determined to curate a design team that would bring cohesiveness to her aesthetic predilections, family needs and art collection. “When I was growing up, my mom worked with one designer over and over again for a long time,” says Joan, who was raised in Land Park. “I was looking for someone like that—a family member almost—who could grow with us over the years.”

She and Laura Neuman of PepperJack Interiors instantly clicked. “Joan and I hit it off immediately, which is a huge component of a successful project and long-term relationship,” says Neuman. “She is colorful, expressive, curious and not afraid to explore. It was probably the most fun project I have worked on.”

As for the thrilling mix of motifs? “It’s not as full tilt as I’d like it to be, because my husband lives there, too,” jokes Joan. David dutifully bowed out of the design process early after Joan promised she’d fulfill his three requests: a full-house surround-sound system, a giant bathtub (he’s 6 feet 4 inches tall) and a sanctuary-style backyard. Again, trust.

However, with Joan and David’s photography business, ArrowMaker Media, growing, he now needs studio space, too. So Joan will be enlisting Neuman to come back and redesign the office to better suit their new needs. Just like mom did. A Tim Collom painting is suspended from the ceiling to avoid drilling into subway tiles. A feast of styles: David Saalsaa of University Art arranged and installed their art collection throughout the house. “The orange cabinetry in the kitchen does make a statement, but they are also relatively neutral in context to the rest of the house,” says Neuman.