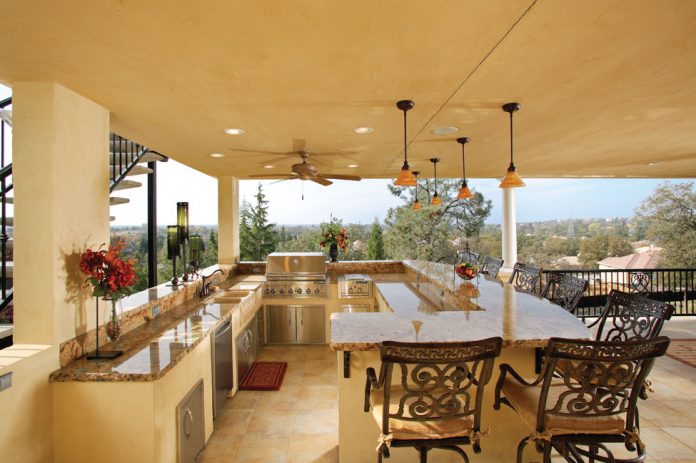 Kevin and Casey Kane sure know how to pack a year with excitement.

In December 2006, they had twin boys. Just three months later, they greenlighted a construction project that added a two-level, 2,600-square-foot outdoor living area to their hillside home in Folsom. While the Kanes have tackled other renovations, those were just lipstick and rouge compared to this one, Casey says. This was almost like building a whole house. There were so many decisions we had to make.

Planning the expansion began almost as soon as they moved in about eight years ago, Kevin says. I almost pulled the trigger twice but stopped both times because of confidence issues with the contractors, he notes. When the couple met Harry Headrick of Expert Design & Construction in Rancho Cordova, they knew they had the right fit.

The design phase was smooth sailing all around. Kevin has been planning every detail for years, going over and over it, Headrick says. This is his vision. And despite the sheer magnitude of the job and the home’s location on a 6 percent slope, construction took only about six months. Building on the side of the hill was a challenge, Headrick says. We had to pour a lot of yards of concrete. What we actually did was pour a deeper footing and attach it to the original footings to give it even more support. When we got done, this structure actually added to the structural integrity of the house.

The new space spans almost the entire length of the west side of the house. The lower level runs from the breakfast nook to the living room; the upper is accessed off the master bedroom. Downstairs, there’s a showstopper of an outdoor kitchen with a Grand Turbo stainless steel gas grill, refrigerator, tons of storage and an elbow-deep, hand-carved limestone sink. Yes, two cooks live in this house. I thought I was a good cook until I married a great cook, says Kevin, who’s happy to take his turn at the new grill. To speed prep work, there’s a 14-foot bank of teak cabinets with built-in beverage cooler (for wine and soft drinks) and a handsome sink of hammered copper. The cabinets are topped with a massive slab of Lapidus Gold granite.

The formal fireplace, with built-in teak-topped benches on both sides, is the focal point of a generous gathering spot outfitted with comfy, durably upholstered sofas and chairs. Between the outdoor kitchen and the fireplace, there’s room for a dining table that seats ten and seven tall chairs that snug up to the kitchen counter for more seating. If there’s a party for five or 50, this space can handle it.
While the first level is all about get-togethers, the second is for getaways. It’s private, uncluttered and quiet. A few lounge chairs can be pulled around the built-in fire pit, or Kevin and Casey can simply step up to the railing to take in sweeping views of the valley floor.

After all those years of planning and waiting, are the Kanes happy with their new outdoor living space? Absolutely, Kevin says. I think it’s rare to have a vision or a dream and actually see it come to fruition exactly the way you see it. You almost always have compromises, but that didn’t happen here.

One thing’s for sure: Kevin and Casey won’t be surprised if the twins grow up asking for their own toolboxes. After all, as babies, they were surrounded by the sounds of progress: hammering, sawing, jackhammering. I fully anticipate my boys will have an interest in construction, Kevin says, laughing. And the new kitchen is sure to get a workout. They may even learn
to cook for themselves out here, he adds.

And they can make as much a mess as they want because we can just take a hose and wash it all down.