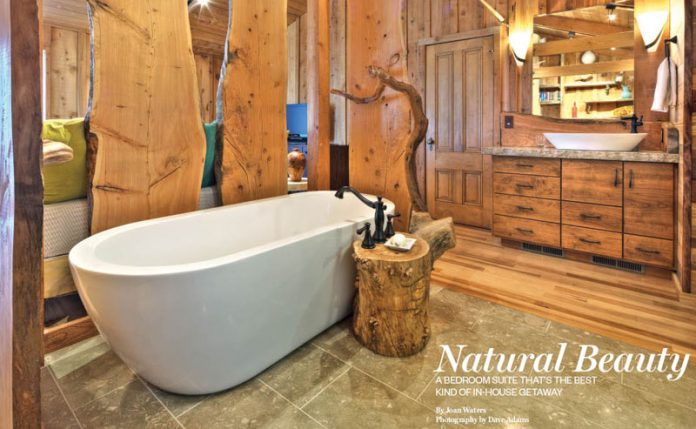 Climb the stairs and beat a hasty retreat from the world. That’s how it works in Jim and Jennifer Nuovo’s Davis home. Arrive at the threshold to the guest suite on the second floor and you step into a realm that’s yours, all yours. Private, warm, welcoming, open and knockout gorgeous. You really don’t want to ever leave.

So it’s difficult to picture the before, which Jennifer describes as dated, dreary and enclosed. “It was two rooms with just a half wall—and so dark,” she says. Daughter Holly used it as a bedroom before she left for college. Her take? “Depressing.” In fact, the transformation was such a joy, it led Holly to her major at UC Santa Barbara: architecture and environmental studies. When she visits home, the sanctuary at the top of the stairs is where she stays. “It’s a wonderful space to be in now,” she says. “Light and airy, and it feels like a forest . . . a nice space away from the craziness of the world.”

The design was always going to be woodsy, relaxed and comfortable: Think vacation home or cabin in the Sierra, says Marty Morse, of Morse Custom Homes and Remodeling in Davis. “That theme is evident in the rest of the house,” he says. “This is clean design, but cozy. There’s no paint, but there’s art and a lot of love and warmth. You feel at peace when you walk in, like you feel when you walk into a bed-and-breakfast.” Jennifer laughs at that, adding, “You feel like maybe there’s going to be muffins downstairs.”

The house: The Nuovos bought the house (built in 1980) in 2002 and have been re-creating and remodeling ever since. Tucked into the backroads of Davis, it’s surrounded by beautifully tended gardens, fruit and olive trees.

Contractor 411: Marty Morse, Morse Custom Homes and Remodeling, Davis. The Nuovos like to work with local contractors. Morse is a Davis native. “You can’t get more local than Marty,” Jennifer says.

What was: An entry opening directly into the sleeping area and half wall. An enclosed water closet/sink disconnected from the main space. Tub and shower perched on an awkward tilecovered platform. What is: Planks of live-edge cypress used for shelves, a desk and as partitions between sleeping and bathing quarters. Each piece was handselected and placed for shape, height and width. “The company we bought them from laid out the shapes on the wall, so we could pick the ones we wanted,” Morse says. Unobtrusive partial walls bookend the walk-in shower. The water closet’s on one side, dressing area and closet on the other.

Bell ringer: The project won a 2014 Contractor of the Year award from the Sacramento chapter of the National Association of the Remodeling Industry.

Master craftsman: Duane Ibach of Vacaville lent his creative vision and woodworking talent to the project. “He’s an artist and a craftsman,” Morse says. Jennifer calls him a “genius with wood. . . . We went out and bought metal brackets for the shelves. He took one look and said, ‘No, no, no.’ Then he went out and found sticks he could carve into brackets.” Other branches became a desk leg, a towel rack and a grab bar. That bathtub: Morse says Ibach went “shopping out in Mother Nature” (on his Vacaville property) and came back with the partial trunk used to mount the tub fixtures. (No easy task, that. It had to be wide enough for the plumbing and a little shelf. Quite a squeeze.)

Creature comforts: Morse’s custom sink vanity is a “celebration of woods.” The mirror echoes the live edge of the cypress backsplash. Lighten up: “The room changed drastically with track lighting and pendants,” Jennifer says.

Organic feel: Glass tiles accent the back wall of the shower. “Holly and I wanted a natural look,” Jennifer says. “Something that looked like rain.” Seeing the forest and the trees: “It was great to be able to make that space so warm and welcoming,” Morse says. Jennifer credits Morse with keeping the project on track. “He was the one who had to figure it all out.”

Sacramento Magazine and Photography by Kevin Fiscus - November 24, 2021
Near me
40 miles