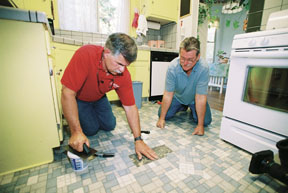 Tom Silva, the star of Ask This Old House, pays a house call on a local couple.

Boston contractor Tom Silva recently paid a visit to a Sacramento couple with a small but vexing problem: a little rip in the sheet vinyl flooring in their kitchen.

Silva flew 3,000 miles across the country to help homeowners Bob and Stephanie Surber repair the hole and, not coincidentally, to film the fix for PBS’ home improvement series Ask This Old House.

There are a lot of projects around the house that people can do themselves, says Silva, the genial general contractor known to Ask This Old House fans for his easygoing ways and New England accent. But they don’t know how to get started.

That’s where Ask This Old House comes in. The show, a half-hour adjunct to This Old House, the longest-running home-improvement show on television, is designed to teach homeowners how to do their own simple home repairs. TOH regulars Silva, plumbing and heating expert Richard Trethewey and landscape contractor Roger Cook pay house calls on people with smallish problems&emdash;a stuck window, a leaky faucet, a tree stump that needs to be removed&emdash;and lead them (and millions of viewers) step by step through the repairs.
The show does most of its filming in the Boston area, where This Old House Productions is headquartered. But every year, ATOH goes on the road, hitting cities in other parts of the country. Recently, it was Sacramento’s turn.

Stephanie Surber had seen a story in a local newspaper about the upcoming visit and sent the producer an e-mail asking for help. The show typically gets 5,000 such requests a month. But, Dick says, her problem in all its ordinariness stood out.

I thought right off: This was a very typical problem. She moved the refrigerator and put a gash in the floor, Dick says. You can sympathize with that.

Dick, Silva and a small crew (director, cameraman, sound technician and publicist) show up at the Surbers’ Arden Arcade home early one morning this past June to film the eight-minute segment. (It’s scheduled to air this month.) Dressed in a red polo shirt and a pair of jeans, Silva walks the couple through the steps of patching the floor. It is, as advertised, stunningly simple: Take a flooring remnant (Silva’s Tip No. 1: Always put some extra aside when you install a vinyl floor) and place it over the hole, matching up the pattern. With a utility knife, cut a rectangle slightly larger than the damaged area, slicing simultaneously through both the new and the existing vinyl. Remove the damaged piece and insert the new section. Glue it down, using vinyl adhesive and a notched trowel. Finally, apply seam sealant to keep the seams from curling.

Three hours and multiple takes later, the Surbers’ vinyl floor looks as good as new. I can’t even see where the patch is, says Bob on camera.

That’s the ideer, Silva responds in his New England accent.

It looks so darn good, I can’t stand it, Stephanie adds.

As the Surbers’ daughter and grandson watch from the next room, director David Vos calls it a day. Grandma’s a star! he tells them.