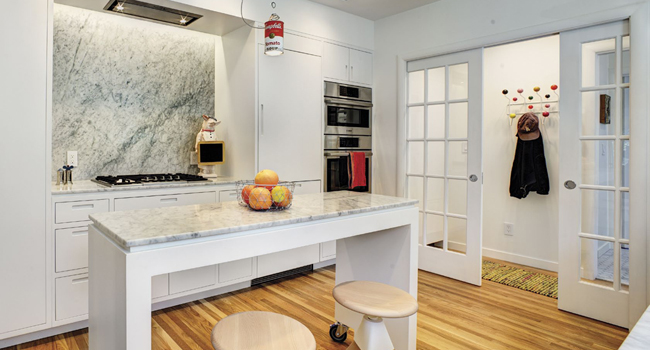 While some of us might struggle with the idea of adding a bold, modern space to a house built in the early 20th century, Jon and Patti Jensen of Land Park didn’t. Not for a minute. They bought their 1940s-era home in 1977, and when they had Curtis Popp and Dustin Littrell of Popp Littrell Architecture + Interiors design a new kitchen and bath, their request was straightforward: Integrate the style of the remodeled space into the traditional look of the rest of the house. And, oh, yes, make it as modern and attractive as possible. Popp and Littrell worked with Patti and Jon, finishing the design in 2012. Sadly, Patti never got to see it built. She died in 2014, and it was Jon who, encouraged by his children, picked up the pieces and greenlighted the project in early 2015. “I’m sure Patti would have loved it and everything in here,” he says. “There would have been a transition period, with everything in a different place, but she would have worked that out. Cooking was her passion, and the kitchen is beautiful. . . . It’s as much her kitchen as it is mine.” THE HOUSE: The Jensens furnished their home, which was built in 1941, with flair, using contemporary art, textural furnishings and a sophisticated color palette. THAT CABINETRY: Inset and flush. It’s what you’d expect to see in a house of this vintage, Popp says. “It looks bespoke and handmade because it is. The style is traditional, but it’s executed in a contemporary way.” No knobs, no handles. “The recessed pulls really make the cabinets what they are,” Jon says.

SCALE, PROPORTION UP FRONT: “So many times you walk into a space, and it doesn’t matter how nice the materials are; if the scale isn’t right, it doesn’t feel right,” Popp says. “We work hard on that. . . . Unless you’re doing a scrape on one of these houses and starting over from scratch, you’re always working in the framework, and there’s no reason to destroy that framework because most of these houses, while small, still work. They need updating, but they were laid out properly. You’ve got public space on one side, private spaces on the other and they flow nicely. . . . The dining room is the right size, the living room is the right size. This kitchen is the exact right size.” FLOATING ISLAND: The 18-inch-by-5-foot island on wheels (with brakes) is just plain perfect. “If you take this out of here, this becomes unprogrammed space, and it can feel awkward,” Popp says. “You’d walk in here and say, ‘Where do I go? What do I do?’ It anchors the space.”

ART SEALS THE DEAL: The fun pendant fixture over the island is by Ingo Maurer. The white and multicolored coat racks were designed by Charles and Ray Eames. “I’ve wanted one of those for 40 years,” Jon says. “Now I have two.” Which makes him one happy guy.