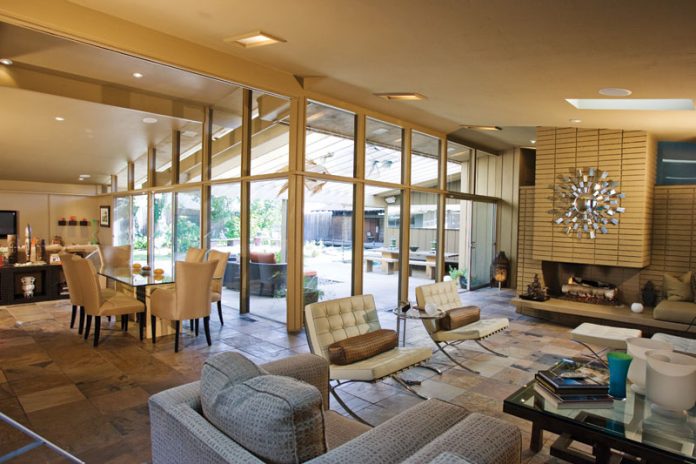 Midcentury modern homes were designed for living the good life to the hilt.

With futuristically sloped roofs, walls of windows, geometrically clean lines and open floor plans, they were great for parties, great for raising kids and ideal for a lifestyle that suited mid-20th-century optimism and infatuation with the future. The homes popped up all over Sacramento during the post-World War II housing boom that began in the late 1940s and swept straight through the swinging ’60s. “Even though these homes seem simple, much thought has been given to layout,” says Kris Lannin Liang, whose avowed enthusiasm for the style led her and fellow fans Gretchen Steinberg and Dane Henas to organize a June 26 tour of some 11 midcentury modern—also called MCM—residences in Land Park and South Land Park. Each of the organizers lives in South Land Park and has a home on the tour. Lannin Liang estimates there are hundreds of MCM homes and commercial buildings in those two neighborhoods alone. For today’s MCM homeowners, the appeal of postwar modern architecture hasn’t missed a beat since it first burst upon the scene. “These houses were designed for living,” says Lannin Liang. “Once you live in one, you just can’t live in anything else.”

Don Wolf and John Costa walk that walk. They’ve gutted and restyled two custom homes designed by revered Sacramento architect Carter Sparks. Their current showpiece of MCM style on Potrero Way in South Land Park is the first custom home Sparks built in Sacramento and is featured on the tour. Built between 1957 and 1959, the contiguous living, dining and media areas form an expansive open space under an exposed-beam ceiling that climbs to a peak of 14 feet. The earth-tone palette takes its cues from the 18-by-18-inch slate floor tiles Wolf and Costa had installed and renders boundaries between interior and exterior irrelevant. “There’s so much glass in that house that I didn’t want to feel a separation of the interior from the exterior,” says Dennis Haworth, Wolf and Costa’s interior designer. The kitchen is a modernist’s dream with tiger’s eye-patterned laminate cabinets, luminescent mosaic tiles and rocket-red bar stools. “You can do some crazy things when a room is so open,” Wolf says about the freedom they had to push the design envelope.

While some may feel MCM architecture fits into the “retro” category, others would scream in protest. “These homes have always been popular in Hollywood, and they’ve never stopped being popular with architects and artists,” says Steinberg, who launched a blog called eichlerific.blogspot.com (named for midcentury modern developer Joseph Eichler) about two years ago. Costa sums up the appeal of his Carter Sparks-designed home this way: “Once you come in, it’s like you are in your own little world.” Now, that’s the good life in any decade you choose.

For tour details and tickets, go to sacmcmhometour.blogspot.com/