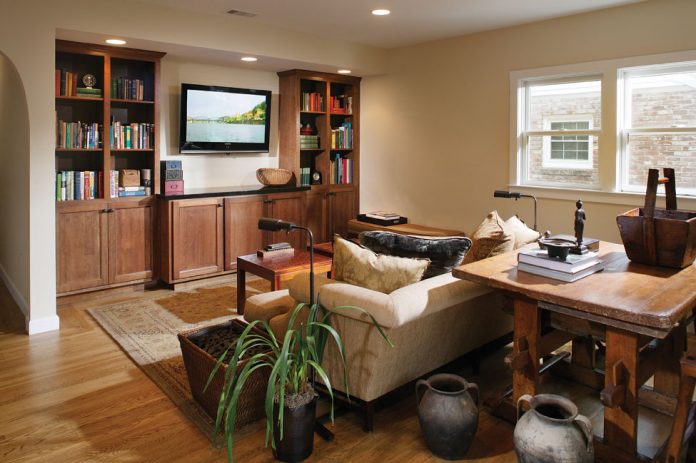 For these newlyweds, remodeling was a labor of love.

True story: Before Frances Viray and her husband, Tom Mollerus, started their remodel project in Land Park, Viray drove a girlfriend over to see the house. But instead of pulling into her own driveway, Viray parked next door. “My girlfriend said, ‘Fran, why aren’t you in your own driveway? Your house is over there.’

“I knew where my house was,” Viray says with a laugh, explaining that she and Mollerus were living in East Sacramento at the time. “I guess there was just something in my head that said, ‘This isn’t really our house.’ Maybe I just didn’t want to believe it.”

The “before” photos paint a pretty clear picture of why Viray wanted to steer clear of the place. Built in 1938, the house had a dark, cloistered entry covered by a shed roof. An old brick chimney stuck up from the roof like a forgotten flag, and the back of the house was saddled with one of those two-story additions that were so popularly plopped onto one-story houses during the 1970s. And that was just the outside. Inside, getting to the family room at the back of the house and to the master bedroom upstairs meant walking down a hallway, then through a bedroom and around a stairway. “There was really no connection to the structure at all,” Mollerus says about the addition.

So he and Viray spent their first year of married life remodeling. (They also were getting another home in Seattle ready to sell, but that’s another story.) “Boy,” says Viray, “what a way to start a marriage.”

One thing they knew from go was that they wanted green construction, meaning nontoxic materials, logical space planning and as little waste as possible. They turned to green builders MAK Design + Build of Davis. Viray and MAK co-owner Ken Kirsch have been friends since their college days at the University of California, Davis. (MAK designer Anthony Anderson, who headed up the project, also has a design degree from UC Davis.) “We knew they were green; that was the important thing,” says Viray, an interior design consultant whose background includes 11 years at Sloan Miyasato’s high-end showroom at the San Francisco Design Center. “Green doesn’t have to be clunky or icky. Green can be beautiful,” she says, adding, “I hate waste. I really do.”

Curb appeal was a priority, so Anderson swept away the shed roof and completely redesigned the porch. Inside, he scuttled the closet-size entry and expanded the arched opening between the living and dining rooms. By punching a larger opening into the kitchen/dining room wall, he created even more visual space for the snazzy new kitchen. Then, to connect the ’70s addition to the rest of the house, he moved the hallway and relocated the stairway leading to the second-floor master bedroom suite. Those changes cleared the passage from the front of the house to a light-filled family room at the back and to the revamped master suite. “People who have seen the (new) layout have just said, ‘Wow,’” Viray explains.

While MAK carried out the structural changes, Viray concentrated on the interior design. Her instinct for object placement brightens every corner of what was once a dreary little house. Dramatic sculptures and furnishings are set off by a light, fresh color palette, and the whole house bears her sophisticated design stamp.

While many of her clients at the design center didn’t have to keep a close eye on a dollar, Viray didn’t have that luxury. She didn’t worry. She knew precisely where to spend. Her drapes, for example, are silk. The beveled subway tiles in the kitchen are Ann Sacks. The kitchen countertops are black granite with specially mitered corners. “I’m very picky,” she says. “I wanted the look to be classic. I did not want this to be an Ikea house. I said, ‘Am I going to like this in 10 years?’” Her answer? “Yes. MAK did a great job. . . . The house looks so different now, I don’t have any trouble pulling into the right driveway.”