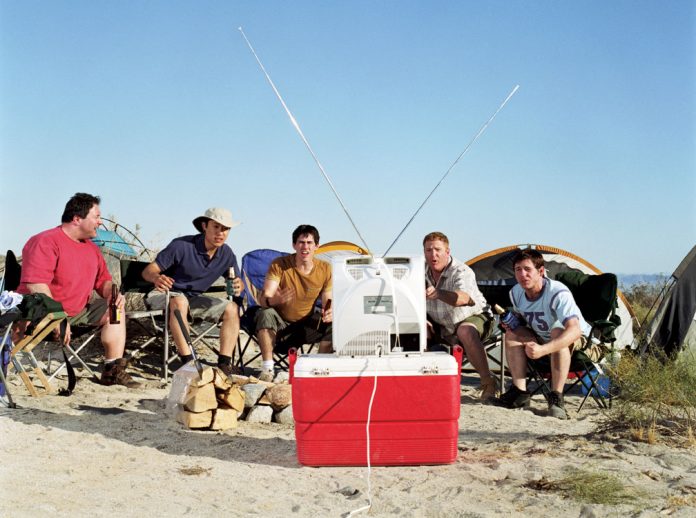 What do you get when you gather up a group of guys for a great getaway? A MANCATION.


Mike Baddley, a 42-year-old advertising executive from Sacramento, is used to putting a positive spin on things to make them sound more appealing. When you read a typical daily itinerary from his recent Thailand vacation, though, you realize this trip doesn’t need a lot of help to sound fantastic:

Wake up to the sound of the ocean outside your room. Put on clothes that were cleaned and pressed overnight by the hotel staff. Eat a gourmet breakfast of omelets, fresh fruit and lobster tails. Take a scuba diving expedition through a sunken ship in 80-degree water with 1,000 feet of visibility. Enjoy a catered meal on the boat ride back to the mainland. Get a two-hour full-body massage. Wrap up the evening on the beach, partying with a group of Australians you met the day before.

A trip like this has all the makings of a dream romantic getaway&emdash;and while Baddley wouldn’t disagree, he also would argue that you don’t need a significant other to enjoy a great vacation. In fact, while Baddley was enjoying his Thai odyssey, his wife was almost 8,000 miles away in Sacramento. Baddley shared his trip with a group of men, a close-knit circle of buddies who decided to take a guys-only getaway commonly known as a mancation.

There’s nothing new about all-male vacations, but they didn’t seem to attract a lot of attention until 2006, when actor Vince Vaughn referred to them as mancations in his film The Break-Up. Since then, the word has become part of the pop culture lexicon, and savvy travel agents and resort operators have been paying attention. Many of them are now offering male-oriented vacation packages that set up groups with every experience imaginable, from auto racing and deep-sea fishing to scotch drinking and cigar smoking. The era of the mancation, it seems, has arrived.

So, what is it about vacationing exclusively with a group of guys that makes the experience so popular? Most men agree it’s not the stimulating conversations that they look forward to. Instead, it’s a chance for them to truly relax and enjoy their experience&emdash;something that may not happen on a traditional vacation. After experiencing an emotional drain from previous family getaways, Baddley immediately saw the appeal of traveling with a group of buddies. When guys get to know each other, he says, things get real very quickly. Guys don’t bring a lot of emotion to the party other than having fun and relaxing.

Dave, a 32-year-old Sacramento radio talk-show host who asked to be identified as Carmichael Dave, agrees. He takes frequent short mancations to Lake Tahoe, where he and his buddies enjoy letting loose and having fun, often at each other’s expense. Everyone can bust each other’s chops, Dave says. You don’t have to worry about feelings or spending quality time together or who looks good in what outfit, or whether or not the restaurant serves garlic aioli on the side.

The profile of the typical mancationer is remarkably consistent, at least among the guys interviewed for this article. He’s roughly 40 years old. He’s probably married, and his married buddies will outnumber single guys in the group by about 3-to-1. He prefers his mancation groups small: about a half-dozen guys on average. He likes his mancations to last a little less than a week. He’s not worried about getting where he’s going in luxury. And he likes to share accommodations once he gets there.

If you’re assuming guys spend all their time lounging, drinking and ogling women once they’re on vacation together, you’re off the mark. Those things may happen, but they’re not the reason guys take a mancation. Instead, they’re looking for trips packed with exciting and unique activities; the more unique the activities are, the more memorable the mancation.

Peter Norris, a 54-year-old creative director at a downtown Sacramento ad agency, doesn’t recall specific nights of drunken mayhem on trips with his old college buddies, but he’ll never forget the night a bear snuck on to their houseboat. Baddley probably saw hundreds of bikini-clad women in Phuket, Thailand, but what sticks in his mind is the scuba-diving session where he came face to face with a whale shark that, in his words, was the size of two Alhambra water delivery trucks. And for David Atherton, a 32-year-old sales manager from Rocklin, the most prized memory from his mancation was the moment he saw Boston’s Fenway Park. Walking through the gates and seeing that field for the first time, Atherton says, is something you’ll never forget.

Of course, guys still act like guys, even when they’re surrounded by enough distractions to keep piggish behavior to a minimum. Bringing beer on a mancation seems as crucial to the trip’s success as bringing other guys, and hedonistic activities take up a big chunk of the schedule. Carmichael Dave, for example, describes a typical day from his Tahoe mancation like this: Gamble. Drink. Gamble. Eat at Fatburger at 3 a.m. And we always spend a day at the sportsbook, watching football, betting heavily and getting horrible heartburn from the chili dogs. Food and entertainment were just as important for Baddley’s group, but their choices in Thailand were more exotic. We ate like kings for pennies on the dollar, he says. There were jumbo prawns the size of a man’s hand, lobster tails the size of your arm. We had lobster and beer and Thai massages almost every night! (Credit Baddley with discretion, though: Thai massages are done over silk robes, and oil isn’t used. Even in Thailand, some guys know where to draw the line.)

Mancationers also slack off a little when it comes to personal hygiene. Basics like showering are usually taken care of, but detail work like shaving and ironing tends to fall by the wayside. Some groups clean themselves up for a big night out, but for the most part, guys seem to appreciate the fact that they don’t have to dress to impress. Carmichael Dave usually gives up trying after the first 24 hours, saying, After your third hangover of the weekend, three total hours of sleep over three days, and the fact that you’re down the value of a small imported vehicle at the tables, you don’t really care if you smell like Vlade Divac after a tripleheader.

If you’re thinking of planning a mancation, you’ve certainly picked a good time to do it. Male-oriented vacation choices have never been more abundant, and you shouldn’t have a problem finding a package that fits your interests and your budget. Golfing is the most popular activity for all-male vacation groups, but there are plenty of niche packages that offer almost any activity imaginable, including:

â€¢ Three nights in Vegas, with gaming chips, race-car driving lessons, use of a Ferrari 360 Spider, and a day of golf and spa treatments

â€¢ A New Year’s Entourage package, including a private Gulfstream flight to Los Angeles, models as party escorts, and diamond and gold watches

â€¢ A Grand Cayman package that includes five sessions of sparring with a former Caribbean boxing champion, followed by a cigar-and-scotch sampling marathon

These and the many other options available prove that a great mancation is limited only by your time, your money and your imagination.

Finally, if you love the idea of getting away with the guys, but you don’t think your wife or girlfriend will give you the OK to go, you may be in for a pleasant surprise. It turns out that women are usually supportive of their significant others’ mancations&emdash;in fact, they can be downright enthusiastic about them. When asked how his wife felt about his annual getaways, Norris says simply, She can’t wait. Carmichael Dave’s fiance is not so thrilled, but she was able to work out a compromise with him: He can take as many mancations as he wants, so long as he takes at least three times as many vacations with her. Whatever else Carmichael Dave’s fiance may be, she’s one hell of a good negotiator.

So, guys, the vacation world is your oyster. Roll up your sleeves and do what any real man would do: Shuck that oyster, barbecue it, and make a
bottle opener out of the shell. Happy traveling!

Tips for an Epic Mancation

1. Center your mancation around a special event or occasion. Great mancations aren’t just about great guys, they’re about great memories. You want your trip to be something you and your buddies will still be talking about years later. The best way to do that is to find a common interest within your group, then come up with a creative way to incorporate that interest into your mancation. For example, Peter Norris and his college buddies have turned their mancations into annual reunions, with different themes, locations and activities planned for each one. They’ve managed to string together 17 reunions without missing a year. On the other hand, David Atherton created a one-shot mancation that centered on his buddy’s bachelor party and his group’s love of baseball. They planned a five-day, four-city circuit through Washington, D.C., Baltimore, New York City and Boston, and attended baseball games in every city. They even managed to sample the nightlife in between ball games, which made for an exhausting but unforgettable trip.

2. Pick good traveling companions. Nothing can sink a mancation faster than a group of guys who don’t get along. Carmichael Dave suggests you don’t even consider a mancation unless all parties know each other and have passed tests together in social situations. Remember, he says, man-vacations are a lot like pro sports teams. You can’t just have good guys; you have to have the chemistry to make it work.

3. Don’t forget the alcohol.  It’s a sad but true fact: Booze is the lubricant that makes a mancation run smoothly. Although none of the guys interviewed for this story thinks you should spend the entire mancation drinking, they agree unanimously that alcohol should be included at some point. Beer seems to be the adult beverage of choice, although some mancationers lean toward wine. As Norris puts it, There’s no mancation so good that it can’t be made better with a bottle of Don Vino!

4. Don’t even think about work. If there’s any subject mancationers agree on as passionately as the inclusion of alcohol, it’s the avoidance of shoptalk. Even when they’re traveling with co-workers, guys steer clear of it. The only exception to this rule, according to Carmichael Dave, happens while you’re gambling. I thought about work every time I pulled the lever on the progressive Wheel of Fortune game, he says. Since the jackpot was usually $3 to $5 million, I would think of winning and the subsequent â€˜screw you’ letters I would send to my bosses.

5. Plan for an extra day. Across the board, guys say their mancations would have been better if they had lasted a little bit longer.

The Impact of Race