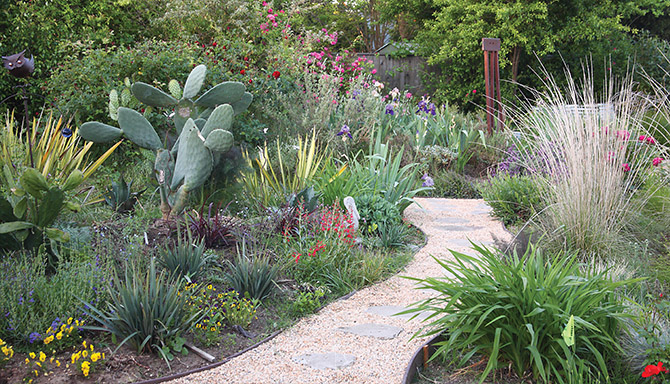 Mike and Annette Heacox are fine artists who paint and sketch. And more. And how. Annette, who loves to make mosaics, was born in France and studied landscape architecture at l’Ecole Supérieure d’Architecture des Jardins, a four-year design school in Paris. Mike, who earned a degree in environmental studies at UC Santa Cruz, is a photographer and aspiring chef. They met at Cal Poly Pomona, where each earned a master’s degree in landscape architecture. After graduation, they lived and worked in Pasadena, then around the world—including six years in France—before arriving in Sacramento. Thirteen years ago, the two licensed landscape architects bought a 1950s-era house with a backyard full of roses. Here’s what happened next.

BACKGROUNDER: Mike and Annette own Luciole Design Inc. in Sacramento. They’re known for fresh, contemporary ideas and for combining an extensive knowledge of resource-efficient plants with sustainable landscape practices, including how to create a habitat for birds and beneficial insects. In fact, luciole is a French word that means “firefly,” and if you pronounce it LOO’-see-ol, you’d be close enough to the way Annette says it.

WHAT THE HEACOXES’ BACKYARD WAS LIKE BEFORE: The standard suburban lot, about 68 feet by 76 feet. It had a mature mulberry tree, some crape myrtles and dozens of rose bushes. The mulberry and crape myrtles stayed. Some of the roses are still there, but 50 or so went to new homes. (Annette likes roses for color and fragrance—as long as they are heat tolerant.)

WHAT IT’S LIKE NOW: A lively mix of quirky sculptures, structures and benches in electric blue, purple and green keep your eyes and feet moving around the yard. A simple yet elegant water feature attracts birds (including an egret who dined on the goldfish), and holes Mike drilled into a slab of wood from a felled tree are now occupied by two types of beneficial wasps. The plant palette is composed of mostly well-behaved species arranged into petite gardens that evolve with experimentation. At the center of the yard is a raised deck the Heacoxes built themselves with a little help from a friend and redwood they reclaimed from a deck that once hugged the back of the house. (They did buy pressure-treated timbers for the foundation.) “It was amazing that we had exactly the right amount of redwood to finish it,” Mike says. The deck, sheltered by the mulberry tree, is ingeniously designed and perfectly suited to its purpose—relaxing and entertaining. It’s made up of three attached rectangles, the largest measuring about 17 feet by 14 feet. The second, at 4 feet wide and about 33 feet long, affords a pathway along the length. The third rectangle is 4.5 feet by about 17 feet. Standing on the deck feels like walking on an observation platform at a nature conservancy. “We wanted to come out here and have this be like a retreat, like it was floating,” Mike says. Even though she would have liked more bridges, Annette thinks that the deck is really quite wonderful just the way it is. “The mulberry tree gives us a beautiful umbrella,” she says. “At night, we can light the lanterns and look up and see the stars.”

ART AND OTHER DESTINATIONS: Areas set aside for relaxation and/or revelry are plentiful. At the end of a little porch out the back door is a green and purple bench adorned with hubcaps and shiny, free-form shapes cut from corrugated metal. Step off the porch and your feet land on one of Annette’s colorful tile and glass mosaics. It’s at the head of a path that leads to another bench, this one three-sided. Take a seat. Look across the yard, and a few feet from a wall of the house painted Chagall blue, there’s a table that can seat 10. The Heacoxes made it, complete with an inlaid mosaic. Turn around, look diagonally across the deck, and there’s another cozy little enclave hidden in a far corner of the yard. So many destinations, each a little gem.

MIKE AND ANNETTE’S GARDEN PHILOSOPHY: Live and let live. Celebrate successes, dismiss failures. As Mike looks at an asymmetrical arrangement of what he identifies as European sedge (Carex divulsa), he says: “We thought it was native, but it’s not.” The plants—shaggy green pompoms—have spread themselves right into the middle of a walkway. That’s fine, Mike says. “It reseeds. If it doesn’t get water, it goes dormant. And when it gets water, it comes back again. You can pull it out if you don’t want it, or to let it grow there, we just cut a hole in the weed barrier fabric. Hey, you know how in school they make you color in the lines? Well, we don’t have to do that.”

GARDENING IN GOOD TIME: “We can go a month without doing anything, and then we go crazy,” Annette says about maintenance. “I used to be a lot more like, ‘Oh, I see weeds,’ but now, I just love being here. I lie down on the deck, and look up through the leaves of the tree. Sometimes, we have a tent we put on the deck, so I feel like I’m camping.” Baby Bliss Flax Lily
Dianella revoluta
PERENNIAL | NON-NATIVE
These plants bring both a structural element and good blue-gray foliage color to the garden. They prefer full sun, and don’t seem fussy about water. If things get too dry, they’ll sit and sulk without growing, but with a bit more water they’ll grow slowly and perhaps put out some almost insignificant blue flowers.

Sundrops
Calylophus drummondianus
LOW PERENNIAL | NON-NATIVE
These plants flower intermittently with a bit of water, and go dormant without it. A good, neat plant for edging paths.

Pozo Blue Sage
Salvia ‘Pozo Blue’
SHRUB | CA NATIVE
This is an improvement on the native Salvia clevelandii, with bigger flowers and supposedly better frost tolerance (there’s no Clevelandii here, so we can’t say if it would freeze). This plant attracts hummingbirds and carpenter bees. It also has strongly scented foliage when cut or brushed against, so it’s better away from paths.

Marguerita BOP Penstemon
Penstemon heterophyllus ‘Marguerita Bop’
COMPACT PERENNIAL | CA NATIVE
These have out-droughted and out-bloomed all our other penstemons, and they did it in clayey soil that killed their cousins. These are a low, neat, intense blue perennial that happens to be native, and would be worth growing in a drier garden even if it were not. This is a favorite of our local hummingbirds and native bees, too.

Hummingbird Sage
Salvia spathacea
CLUMPING PERENNIAL | CA NATIVE
The best things about this plant are ease of propagation (just dig up a rooted stem and plant it at the beginning of the rainy season) and attractive red flowers that live up to the plant’s common name. Hummingbird sage grows in light shade or full sun, although it wants more water in the latter situation.

Blue Flax
Linum lewisii
PERENNIAL/BIENNIAL | CA NATIVE
This plant creates a morning-only show of blue flowers that combine well with Blue-Eyed Grass (Sisyrinchium) and Marguerita BOP penstemon. It’s not a long lived plant, but it makes up for this by reseeding happily when conditions are right.

Deer Grass
Muhlenbergia rigens
ORNAMENTAL GRASS | CA NATIVE
These plants are kind of like fireworks, with flower stalks that shoot out in stiff arcs from the foliage. This is something that accents changing light in the garden, changing color according to the light hitting it.

Taiwan Flowering Raspberry
Rubus calycinoides ‘Emerald Carpet’
GROUND COVER | NON-NATIVE
Our plant hasn’t done a lot, but in gardens elsewhere it’s done its job of covering the soil remarkably well. Its stems trail and root, spreading out to eventually cover large areas in crinkly evergreen foliage. Since the plants can be variable performers, it might be a good idea to try a few plants before installing it in mass.

Red Yucca
Hesperaloe parvifolia
FLOWERING SUCCULENT/ACCENT | NON-NATIVE
This accent plant is a hummingbird magnet, with tall stems of coral-pink flowers reaching well above the foliage. It absolutely needs full sun and good drainage, but will grow in clay soil if mounded.

Hot Lips Sage
Salvia microphylla ‘Hot Lips’
LOW SHRUB | NON-NATIVE
This thing’s flowers change color depending on the tem- perature from magenta to white, with an intermediate half-and-half display. Hummingbirds like the flowers, no matter what color they are.

Prairie Fire Sedge
Carex ‘Prairie Fire’
GRASS-LIKE PLANT | NON-NATIVE
This looks like a green-orange floppy wig. It’s a great thing to blend into a meadow for a bit of color contrast in the foliage.

Quamash
Camassia quamash
BULB | CA NATIVE
There are a lot of interesting native bulbs, like this plant. It’s got star-shaped blue flowers in spring, and likes seasonally wet conditions, making it a great choice for the meadow and rain garden.

Fragrant Sweet Box
Sarcococca ruscifolia
EVERGREEN SHRUB | NON-NATIVE
This is not a plant you’ll likely notice, even when it’s in flower. It’s a nondescript evergreen shrub with tiny green flowers. Why grow it? It likes shade, and those tiny flowers produce a wonderful subtle fragrance in early spring.

Artichoke agave
Agave parryi
SUCCULENT ACCENT | NON-NATIVE
Most agaves fall into two groups: huge monster plants that will take over a large part of your landscape, and smaller more ornamental types that tend to freeze to black mush if the temperature drops much below freezing. This plant is an exception; the plants are only about two feet wide (although they form larger clumps if allowed). The plants have silver-blue foliage outlined with black spines (obviously another plant that should not be next to a traffic area). These look great mixed with non-succulents like pen- stemons, grasses and other low plants with varying textures.