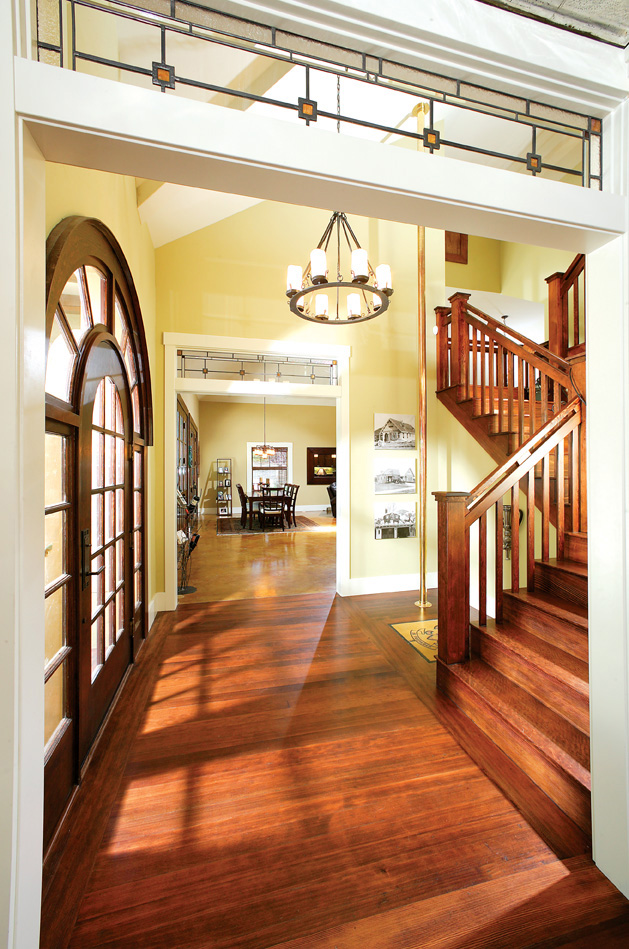 Vision. Some people have it; some don’t.

Rich Baumhofer and Cindy Bechtel fall squarely into the have vision category. When the couple stumbled upon a dilapidated old house in Curtis Park, they could see it had major potential.

Their friends told them they were crazy to consider buying the structure, which had been built in 1917 as a fire station and later converted to a private home. But buy it they did, setting out to restore its firehouse charm.

They succeeded so spectacularly that HGTV will feature their house on an upcoming episode of reZONED, a show about people who turn commercial spaces into one-of-a-kind homes.

â€¢ My intention was to rebuild in the spirit of the original firehouse, says Baumhofer, a builder and general contractor who has worked on many old houses. He kept the shell of the Craftsman-style building intact while gutting the inside to create a spacious, family-friendly home.

â€¢ The original one-story firehouse had an unfinished attic, which Baumhofer and Bechtel converted into bedrooms for their three daughters. They bought a fire pole for the stairway at brassfinders.com. You can get anything on the Internet, says Bechtel.

â€¢ In the kitchen, stools belly up to a yellow onyx-topped bar. The Craftsman cabinets are made of alder, the countertops of mahogany. Bechtel and her daughter stained the concrete floor themselves.

â€¢ The original 30-by-30-foot garage was big enough for two firetrucks. Now it’s a multifunctional room for cooking, dining, entertaining and relaxing. In old buildings, you don’t usually get a space like this, says Baumhofer.

â€¢  Baumhofer and Bechtel saw a yellow onyx bar at San Francisco’s Fog City Diner and had to have one of their own. Baumhofer designed and built it himself. Lit from below, it was an engineering feat, says Bechtel.

â€¢  The old firehouse office became the formal living room. To add charm, Baumhofer and Bechtel installed a tin ceiling (bought on the Internet at americantinceilings.com), treating it with an acid wash to bring down the sheen. They also haunted salvage yards for windows, doors and light fixtures. Their favorites: Ohmega Salvage and Urban Ore, both in Berkeley.

â€¢ Bechtel found the fire nozzle on eBay. The Be Prepared floor medallion was discovered during construction; it dates from the 1950s, when the house was used as a local Boy Scout Council headquarters.

â€¢ The master bedroom and bath feature a see-through fireplace. Bechtel bought the claw-foot tub on eBay; to save money on the vanity, she purchased a cheap Indonesian-import buffet, removed its feet, topped the piece with an inexpensive granite remnant and put in double sinks.

â€¢ The dining room’s French doors, which open up to the front yard, have bubble glass for privacy: It lets in light but keeps curious passersby from peering inside. In the original building, home to Sierra Curtis #7 Fire Station, double carriage doors opened to the firehouse garage. Baumhofer and Bechtel turned the space into a kitchen/family room/dining room and replaced the old firehouse doors. We almost put real garage doors there, says Bechtel, the kind that roll up. We wanted to be able to open up the front of the house. They also considered barn doors and airplane hangar doors before settling on custom-built French doors that swing out, not up.