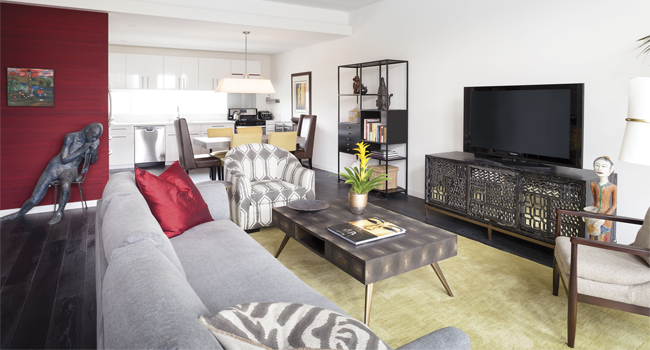 Art sets the tone in a home like nothing else. Individual pieces, acquired over a lifetime, tell stories and create depth, making one home strikingly different from any other. But recognizing art as a potent design ingredient does something else, too. It offers an aesthetic framework for furnishings, lighting, all the necessities of a comfortable daily life. Designer Aimee Griffin of Roseville embraced that concept for her work in Harold Levine’s bright, airy and new modern space in the Bridge District of West Sacramento. Levine, an anthropologist by training, world traveler and dean of the school of education at UC Davis, moved into his ultracool two-story home last March, bringing his carefully curated art collection with him . . . and leaving most of his furnishings in the past. He wanted a fresh start. “It was fun to work with such cool art pieces and then come up with the ‘supporting characters,’” Griffin says. “His style is eclectic, and he feels very comfortable with variety in the art pieces. His eye is attuned to a broad group of cultures, so when it comes to the furniture, I can say, ‘Let’s do it this way.’ My job is to read the undercurrents that people often can’t see in themselves.” Outfitting the home took less than a year. “I thought I could call Aimee, and she would give me a few ideas and I could do it myself,” Levine says. “But then it became clear to me I did not know where to start. This was a completely blank slate.” The developer: Fulcrum, headquartered in Sacramento

Viewpoints: Front windows frame sleek, modern architecture across a greenspace. Back windows offer dramatic vistas of Interstate 80. “At night it’s mesmerizing,” Levine says. “They (Fulcrum) built these homes so solidly, you can’t hear anything. . . . They lavished a lot of attention on these places.”

Pivotal pieces: A limited-edition print by Shimon Okshteyn inspired red and yellow accents in the main living spaces. Griffin initially envisioned yellow and navy blue. Levine had designs on red. She switched gears. “He has strong ideas. He knows what he likes. I said, ‘Great! I can go with red!’”

Off and running: Garnet-colored silk wallcovering highlights a sculpture by C.A. Michel and an unsigned painting Levine bought as a teenager. “Wallcovering, as Harold can attest, sings in a beautiful way in this clean, modern space,” Griffin remarks. “It draws you in immediately.”

Color without clutter: Tiny mirrors set into a media console opposite the sofa reflect the corn-silk yellow of an area rug. An oversized book about Egyptian art (a reminder of Levine’s recent trip) adds a glint of burnished gold.

Metropolitan cool: “We looked at 1,000 tables to get the right one,” Levine says, laughing. He wanted a dining table that would seat 10. She convinced him the space was too small. “Aimee will give on some things, but on other things she will put her foot down,” Levine says. This was one of those things.

Iron man: A diminutive sculpture Levine bought when he was in graduate school influenced Griffin’s choice of the storage/shelf unit. “I wanted it to be clean and show off the sculpture,” she says. “Art had to be the primary interest.”

Calming color: “The view out the window is strong, and the art and the color of the buildings play nicely,” Griffin says about the master bedroom. The Micah Crandall-Bear painting anchored the blue-gray/aqua palette. The grass cloth is Phillip Jeffries. “The gold standard,” Griffin says. “It’s all done by hand.”

Blank slate no more: “This feels like home and it feels great,” Levine says. “Aimee and I had a creative tension that made working together fun . . . and the result is fabulous.”