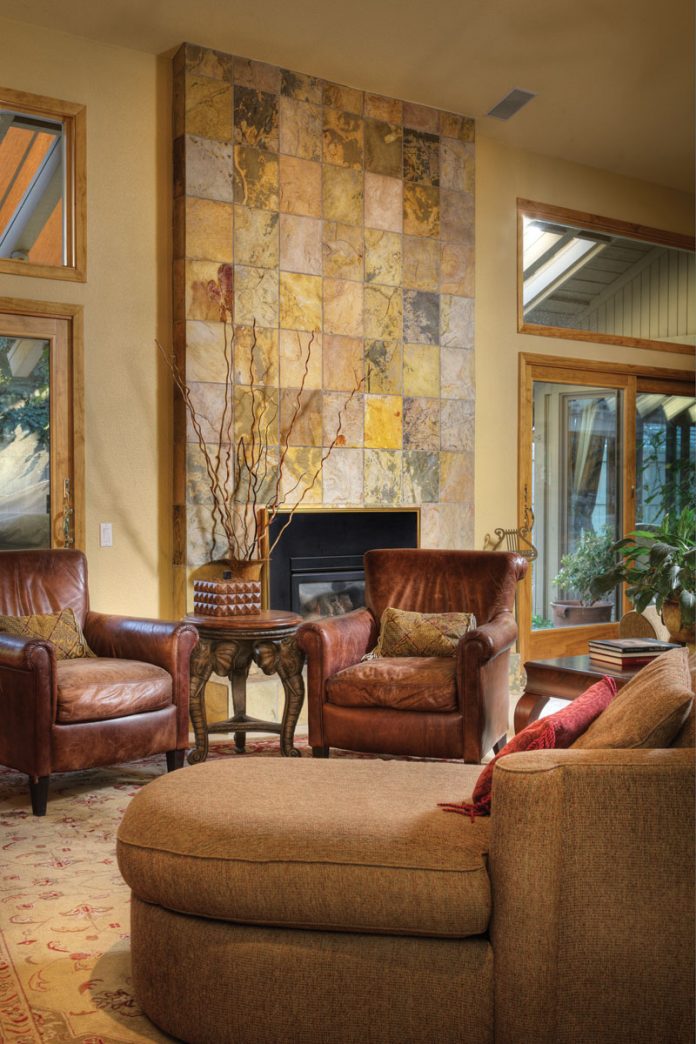 A Gold River couple update their master suite with stone and tile.

Interior designer Kerrie Kelly figures she and Jim Loehr worked on somewhere around 6,800 of the houses that were built at Del Webb’s Sun City development in Lincoln Hills. She was design studio manager and director of merchandising. He is co-owner of Sacramento’s Natural Stone Design Gallery and Sherman-Loehr Custom Tile Works.

So when Jim and his wife, Joyce, started thinking about a revamp of the master bedroom suite in their own Gold River home, it seemed only natural they would turn to Kelly for help.

Before they even moved into the home in 1998, the Loehrs refaced the slump stone on the hearth and fireplace wall with multicolored, clefted prairie slate. Since then, they’ve redone all the stonework in the house and put in a sleek, porto beige limestone floor.

Kelly, now CEO of Kerrie Kelly Design Lab in Sacramento, knew a huge part of her job would be to keep the focus on the Loehrs’ personal style. As co-owners of one of the area’s best known stone, solid surface and tile resources, the couple have “access to almost everything,” Kelly says. “We modified and modified and modified until we got something that was perfect for them.”

Getting to perfect
The bedroom suite makeover began with a teardown to the wall studs. Twenty-four-inch limestone squares were flawlessly “feathered” in to match the existing entry floor. The old tub and shower were demolished and replaced, and a furniture-style, granite-topped, ebonized vanity connected the master bedroom to the bath. A former hair salon owner, Joyce says she definitely wanted a “furniture” look for the vanity. She and Jim each have a vessel sink of root beer-colored recycled glass set into the granite under a tile-framed mirror. There’s a makeup table right in the middle. “I used to have just a hanging mirror and I wanted a place to sit,” Joyce says, laughing.

The soothing mushroom-color paint chosen for the walls offers a neutral backdrop for a dramatic four-poster bed Joyce stashed away in the garage two years before she had the space for it. “I found it and loved it and wanted it, and said, ‘Someday, I’ll build a room around it.’” She did. A mirrored bureau against one wall adds a glint of vintage glamour, and finishing personal touches in the room include a framed sepia photograph of Jim’s Montana hometown on his side of the bed and a painting of a zebra with lush eyelashes on Joyce’s side—to add a splash of femininity and plain old-fashioned pizzazz.

No-fuss style
A comfortable, attractive master suite that wasn’t overdone was always the goal. “We live in this house,” Jim says. “We didn’t want to go too fussy about anything.” As a result, Kelly says one of her favorite parts of the project was “repackaging” the couple’s small items to build a big picture of personal style. “I love the picture of Jim’s hometown on his side of the bed,” she says. “It’s a photo that’s important to him, and it was fun to have it showcased in this space.” Under the zebra painting on Joyce’s side of the bed are three crystal globes, one a music box that Jim gave her for her 50th birthday and a remembrance of a trip they made to Italy that year. “Their house is such a place of comfort,” Kelly says. “Joyce is very much a person of detail who also happens to have great taste.”

In fact, Joyce designed the curvaceous cherry wood vanity for the guest bathroom. Kelly calls the design “just plain sexy.” Joyce also “papered” the room with multiple layers of crumpled tissue, finishing it with a special paint glaze that gives it a metallic sheen. “I actually try to stay out of the [stone] gallery,” Joyce says, “because there are always new things coming in, and it’s so easy to think, ‘Ooooo, that would be so nice.’”

But right now, and for the time being, the Loehr home is perfect just the way it is.