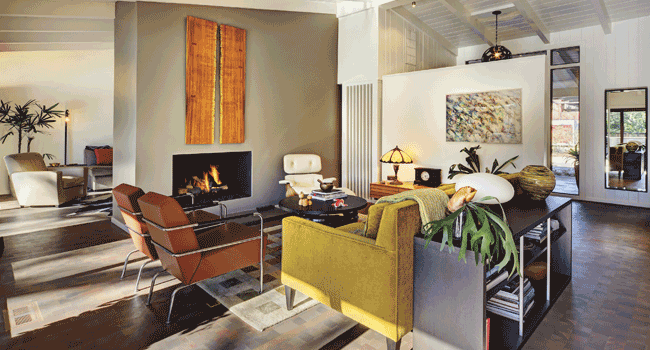 I knew what this house could be the minute I saw it, says architect Steve Lochte. Considering what he was looking at was pretty much a mess, that’s a big statement. Unoccupied for two years when Lochte saw it, the circa 1964 Wilhaggin ranch had carpet and laminate floors; the kitchen was closed off (not even a pass-through) with 8-foot Sheetrock ceilings smothering the open-beam architecture. The master bedroom was on the street side of the house. (Who knows why.) The landscaping was mostly dead or gone. Awful stuff—midcentury-modern bones at their weariest. Lochte saw through all that. His partner, Mike Ownbey, trusted his vision. For good reason. Lochte, who has offices in San Francisco and Sacramento, has designed spaces for the most celebrated names in high-end luxury retail, including Givenchy, Valentino, Prada, Bulgari. Quite the list. He’s also created several extraordinary residences. Ownbey, a well-known Sacramento real estate agent and no stranger to design, has renovated homes of his own in East Sac, Land Park and Sierra Oaks. The two went to work adding color, innovative materials and texture. (Check out that floor.) And something else. A show stealer that flies under the radar until you take a close look: the lighting. Skillful placement and selection of fixtures (the lion’s share from Lumens Light + Living in midtown) turned a dark, closed-off series of rooms into an illuminated space where line and color are expertly composed and showcased. “I cannot tell you how much we love living in this house,” Lochte says. “It’s ideal for the way we want to live.” Ownbey says he’s answered the door any number of times to field questions from people walking the neighborhood wanting to know who lives there and who worked on the house. “I didn’t have the vision Steve had at first,” he says. “But once I started seeing the plans and drawings, I got it. . . . Like I always tell Steve, ‘We live in a great house.’” Interior focus: “This style of house can be a challenge to light because of the open-beam ceiling,” Lochte says. “There’s no place to hide the wires, and I did not want to destroy the integrity of the space.”

Solution No. 1: “We needed lighting over the kitchen counters and on living room walls and entry walls, but you just can’t run wires out all over the place on these ceilings, so I fattened up the center beam a little bit and ran wiring behind the wood I put on there. Then we mounted the lights up the beam.”

Solution No. 2: “For the pendants, we routed a groove in the beams and ran conduit in there. . . . We put a strip of wood over where we put the conduit and spack-led it and painted it and it just sort of disappeared.”

Easy on the eye: Uplighting with sconces gives the house a glow, day or night.

Clear as day: Before they decided to open up the back of the house with windows and doors, “there was one sliding glass door and a lot of blank wall in between.” Lochte says. What a difference. What’s underfoot: End-grain flooring. It’s a bit unusual in that pieces from timber ends are hooked together and buffed three times with an oil-and-color combination. Each buffing heats up the oil to seal the wood and create an extremely durable surface. Resource central: “The house ended up being kind of a Lumens showroom,” Lochte says.

Know what you like: “Steve is easy to work with because he knows what he likes,” says Joyce Wolfe, Lumens Light + Living showroom manager. (But what if you don’t? “We like to help people explore and find out what they are looking for in terms of style, scale, color,” Wolfe says. “We want to be as helpful as we can.”)

Exterior comeback: Lochte and Ownbey added eye-catching, drought-tolerant plantings, redesigned the front entry and a deck that runs the length of the house at the back.

Work in progress: “This really was a remodeling process that just kind of snowballed,” Lochte says about the project, which took nine months. “But we’re 98 percent there.” And that’s a great place to be.