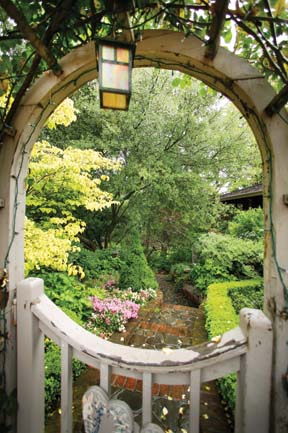 A Carmichael couple writes the book on remodeling.

Once upon a time (OK, five years ago), Larrie and Diane Grenz were living on an enchanting 2-acre estate in Carmichael. But all was not well in their tiny kingdom, for their wood deck was rotting. They needed a fairy godmother&emdash;or, failing that, a good contractor.

This story has a happy ending. But, like any good fairy tale, it took a lot of twists and turns along the way.

This is the project that grew and grew, says Larrie.

Looking to replace the redwood deck at the front of their cottagey home, the couple hired landscape architect Ron Allison to design a new courtyard entrance. While they were at it, they decided to expand the project to include the foyer. Then, they asked themselves, why not redo the master bedroom? And&emdash;what the heck&emdash;the backyard?

The 1910 house already had oodles of charm but desperately needed updating. I wanted something homey but elegant, says Diane.

Contractor Bruno Peters, owner of Altech Design/Construction, reconfigured the master bedroom to create a separate cozy sitting room with a fireplace and added almost 300 square feet for a roomy walk-in closet. A new entry leads out from the bedroom to the formal garden, where landscape builder Steve Vasquez with Zierden Landscape Company remodeled the pool and added new decks, walls, pathways, fountains and a waterfall.

For the master bath, Diane handed Peters a photo she’d ripped from a magazine years earlier. That’s what I want, she said. On her wish list: a glassed-in shower, soaking tub, fireplace, furniturelike vanities and windows overlooking the garden. It’s a peaceful environment, she explains.

Flushed with success, the Grenzes tackled another small redo: installing a skylight in the dining room. But that project, too, acquired a life of its own as it grew to include the nearby kitchen and family room.
The kitchen appliances were starting to go, says Larrie. So we decided to upgrade everything.

Diane had long yearned for an open, inviting kitchen filled with curves. She wanted to feel enveloped by the kitchen, Peters says.

So he came up with a design for a 1,700-square-foot great room, with a sitting area and gentleman’s bar at one end, a dining space at the other and an inviting open kitchen smack-dab in the middle. Sinuous cabinetry surrounding a massive island defines the kitchen without walls.

Varying ceiling treatments (a barrel ceiling here, a vaulted ceiling there) break up the space, and low-voltage halogen lighting adds to the ambiance. All the lights are on dimmers, so you can make the lighting soft and moody, Peters notes. Diane doesn’t like harsh lighting. Adds Diane with a laugh, I want every woman who comes to my home to look gorgeous.

In the dining room, the couple got the stepped ceiling and skylight they wanted, but not without a lot of angst. Three architects told them it couldn’t be done before Peters figured out how to engineer the ceiling. This skylight is an art piece, Diane marvels.

To add to the house’s storybook feel, Larrie and Diane requested rough-hewn wood floors. When the newly installed floors proved too smooth, Peters saved the day, hiring eight men who labored seven days on their hands and knees roughing up the wood.

When the yearslong project was finally completed, Diane and Larrie were so pleased that they invited everyone who had worked on the job over for a catered party with a band. (Larrie even gave Vasquez a puppy in appreciation.) We’re thrilled, says Diane. We’ll never want to move.
And they all lived happily ever after.