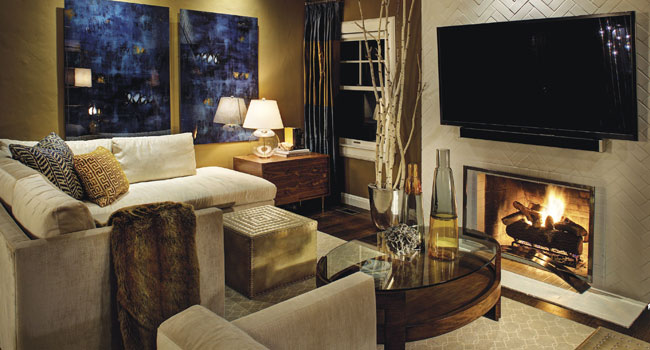 Frank Mecca has much more than a passing interest in design. And it shows. Boy, does it ever. He’s been remodeling his circa 1929 East Sac Tudor since he moved in, and he’s not shy about tackling the big stuff. He’s had walls taken down. Doors moved. The works. He’s even had his kitchen rebuilt from the studs out, selecting cabinetry, countertops, hardware, appliances, all on his own. So it’s surprising to hear him talk about his decision to step back when it came to redoing the living and dining room spaces. “I did a lot of the design work in the kitchen myself, and I’m happy with how it turned out,” he says. “I can get things about 90 percent of the way, but the finishing touches that unify and harmonize spaces and make a house feel like a home, I’m not great at. . . . I knew I wanted to bring a modern sensibility into a traditional house, and I knew I needed professional help.” He and designer Laura Neuman of PepperJack Interiors in Loomis clicked right from the start. “Frank did an amazing job with the kitchen,” Neuman says. “You don’t see many houses that are this fabulous, right? But when I came in, the living room and dining room seemed disconnected. I went to town in those two rooms.”

“I’m very analytical by nature,” Mecca says, “and as I was interviewing designers, I could tell that Laura had a sense of precision and an approach that complements her artistic side. That was reassuring for me because I had not hired a designer before, and it’s an expense. There are so many things—from the layout to the finishing choices—that Laura convinced me would work that I never would have done on my own.” DESIGNER 411: Laura Neuman, PepperJack Interiors, Loomis. An allied member of ASID, she has an associate’s degree in interior design and an industrial engineering degree from Stanford University.

WANTED: A modern living and dining room space with the ambience of a luxurious lounge. “I wanted the space to feel like a gorgeous lobby in a boutique hotel,” Mecca says. He hosts small gatherings and large parties with as many as 50 guests. Comfort and style rank high on his priority scale.

“BEFORE” CHALLENGES: The firebox was surrounded by staggered brick, and the Spanish revival-style lighting was heavy looking. Beams, door frames, window frames, baseboards and the fireplace mantel were clad in shiny white paint and accented with a dated “scalloped” design motif. The living room could seat four or five people, at most.

“AFTER” SOLUTIONS: Neuman covered the beams with wood (bye-bye scallops) and created a dramatic brick herringbone pattern for the fireplace wall. That’s where she wanted to put the swivel-mounted TV. “I hated that idea,” says Mecca. I’m a movie and football fan, and I know if you put the TV up too high, your neck gets sore.” Neuman explained that the TV on the fireplace wall would allow him to get more than a half-dozen people in the living room. “I told him, ‘We can make this whole wall a feature. It will look like art. We’ll position the TV low, so your neck won’t hurt, and we’ll frame the wall with smart-looking window treatments. It’s going to look beautiful and you’re going to love it.’” She was right.

STARRY NIGHT AND MORE: Blue. That’s the color Neuman painted the dining room ceiling between the beams. She added a chandelier of sparkling glass spheres over a traditional oval dining table that can seat 12. “It’s cheerful and lighthearted in here now,” she says. “At night, it looks so celestial in here,” Mecca says.

THE ROCCO FACTOR: Mecca’s “exuberantly friendly” dog, Rocco, a fluffy, white 11-year-old Eskie, was a “significant” design factor, he says. “Laura convinced me to get light-colored velvet sofas, and I said ‘Laura, you’re crazy. White sofas get dirty.’ She said, ‘Yes, they do, but they don’t show white dog hair, and I know we can find something that won’t stain.” Making everyone, including Rocco, very happy. “There’s no heaviness in here,” Neuman says about the space. “And at night, it does feel like you are in the lobby of a beautiful hotel.”