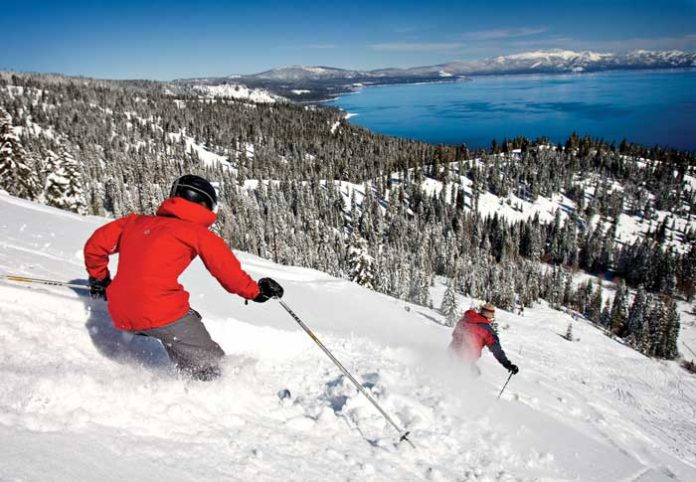 Enhanced kids’ safety on chairlifts. Programs to elevate your snowboarding a notch. Improved beginner terrain. A new wintertime zip line tour. This year, the Sierra ski resorts have put on a frosty new face, launching these and other improvements catering to skiers, snowboarders and anyone who savors time in a winter wonderland. Nearby restaurants, shops and galleries also have introduced updates.
OK. So maybe you really don’t need a new reason to throw caution to the wind and fly down the ski slopes, screaming like you haven’t screamed since you were a kid. But just in case you’re thinking about tackling that home improvement project or overflowing laundry basket, here are close to two dozen enticements to make you grab your skis, your snowboard, your kids—even your dog—and hit the slopes.

1. You, Tubing
Soda Springs has nearly doubled the size of Tube Town, where you can zip over berms, banks and rollers on the new Super Tuber Cross tubing run. At Alpine Meadows, hop aboard oversized snow tubes and whiz down three new 300-foot-long snow tubing lanes, then get back up to the top on the new Magic Carpet surface lifts.

2. Snow No Matter What
Fifteen new snowmaking guns blanket Boreal’s upper mountain, so skiers can schuss down the Accelerator run earlier in the season. In addition, the guns increase coverage to The Race Course and Superpipe. Squaw Valley USA also continued upgrading the mountain’s snowmaking equipment. The tally? A total of 145 guns upgraded to greener and more efficient models, including 39 new snowguns for the 2010–11 season. New snowmaking at Squaw also pumps out powder on the terrain parkhalfpipe. Mt. Rose has given Mother Nature a helping hand by expanding its snowmaking to Lower Silver Dollar Run—ensuring top-to-bottom coverage early in season on the mountain’s Slide side.

5. Beginner’s Luck
Newbies have a smooth ride to the top of Broadway, Sierra-at-Tahoe’s easiest slope, on two new carpet conveyor lifts. The 700-foot-long carpets pull you up to Easy Street, Sierra’s expanded beginner terrain—11 total acres of sculpted Smart Terrain with gently banked turns and shaped features that naturally guide skiers and snowboarders into turns and stops so they can learn the fundamentals of skiing and riding more quickly. At Tahoe Donner’s new terrain park, beginning skiers and boarders refine their skills on rails, jumps and other features.

6. Girls’ Day Out
Northstar-at-Tahoe has revised its women’s snowboard camps. Learn the sport or hone your snowboard skills in one-day programs. Offered select Fridays during the winter, each snowboard camp spotlights different skills and techniques.

7. Keeping You in the Dark
Bask in the glow of improved night lighting at Squaw Valley’s Riviera terrain park and halfpipe. Night owls can tackle the slopes until 7 p.m. midweek, 9 p.m. weekends.

9. A Real Deal
Mt. Rose is offering a new Third Day Free special: Ski for any three consecutive days but pay for only two—any day of the week. Bonus Mondays also return with a new twist: As always, present your previous Saturday or Sunday Mt. Rose lift ticket to receive a $29 lift ticket on Monday. Don’t have a weekend ticket? This year, you can buy a ticket on Monday for only $39.

10. Drop the Skis
At Royal Gorge, trek snowshoe-only trails across meadows covered with sparkling snow, through the forest and past views of Kilborn Lake. You also can take a guided moonlight snowshoe tour. In Hope Valley, Sorensen’s Resort is offering cabin guests free access to snowshoes on a first-come, first-served basis. Strap them on and trek across meadows while gazing at Carson Pass, or venture up Indian Head Trail, where the aspens stretch their white branches toward the sky.

11. High-Tech Happiness
Download the new Mt. Rose iPhone app for an interactive trail map, current snow report, lift status and more. Or get the new Mammoth Mountain app for the latest conditions at the resort. At Heavenly, use the EpicMix app, which allows you to track your activity (distance, speed, vertical feet), connect with Facebook and Twitter, and collect points.

12. Get Away From It All
Discover a more serene, less traveled section of a ski area by taking a professionally guided backcountry and sidecountry tour at Sugar Bowl.

13. A Helping Hand
Kirkwood has teamed with Burton Snowboards to help new and advancing riders progress from the beginner park features on Chair 7 to the new big hits on Chair 5. Kirkwood’s Burton Learn To Ride experience includes new runs with larger man-made hits off the two Chair 5 parks. The resort’s new wider park features also have opened up the terrain to freestyle skiers and beginning snowboarders.

14. Soar Like an Eagle
At Kirkwood’s new Zip Tahoe Treeline Canopy Tour, slide along six zips and four suspension bridges located at the top of Chair 7 in the resort’s Timber Creek Village area. On the fully guided tour, fly between the trees at heights of more than 80 feet and at a speed of 35 miles per hour.

15. A Whole Ski Area to Yourself
Rent Granlibakken’s ski area Monday through Thursday for $750 per day (catering, use of sledding hill and ropes course extra). It’s ideal for family reunions or team-building events.

17. Enjoy the View
Beginning in February, watch skiers finishing their runs or boarders doing tricks in the terrain park through floor-to-ceiling glass windows from Heavenly’s new Tamarack Lodge restaurant at the top of the gondola. In this 14,980-square-foot eatery, relax in one of 500 indoor seats or soak up the Sierra sun in one of 250 outdoor patio seats on the 4,000-square-foot deck.

18. Old Favorites, New Features
West Shore Cafe and Inn near Homewood Mountain Resort at Lake Tahoe reopened under new owners after being closed for more than year. Check out the new menu. The newly remodeled Lone Eagle Grille at the Hyatt in Incline Village has also reopened. Sip an après-ski cocktail at the bar or order from the new menu in the lounge.

19. Tamed by the Beast
Travel over premium groomed slopes and trails at Alpine Meadows thanks to The Beast, a new grooming machine capable of handling 40 percent more terrain and with 40 percent more pushing power than a traditional groomer.

20. Wing Your Way to the Slopes
Fly United Airline’s new nonstop flights from San Francisco to Mammoth Yosemite Airport, or hop aboard Horizon Air in Sacramento for a one-stop winter getaway to Mammoth via LAX.

21. Beat the Crowds
Carve your first tracks at Mammoth Mountain on Saturday mornings between 7:30 and 8:30 thanks to the new Early-Up ski pass. A breakfast buffet at McCoy Station is included.

22. Hamburger Heaven
At The Grid Bar & Grill in Kings Beach, sink your teeth into the Keep Tahoe Bleu Burger, with crumbled blue cheese and your choice of toppings.

Kid Stuff—Many resort improvements cater to the smallest visitors. On Blizzard Mountain at Sierra-at-Tahoe, kids can slide down a rope-tow-accessible tubing lane and enjoy the snow play and sledding area. From there, depart on three miles of marked snowshoe trails that gently wind through the forest to a wide-open spot perfect for snow picnics, making snow angels or competing in snowshoe football.
Children at Alpine Meadows, meanwhile, are magnetized by their time on the ski hill—literally. While riding the Meadow and Subway chairlifts, children wear a magnetic vest that gently secures them to the electromagnetic seat back for an added measure of safety. Alpine Meadows is North America’s first ski resort to offer the Magnestick technology. The resort also unveiled a modernized children’s center, with additional space for daily ski and snowboard camps and a new snow play area.
At Squaw Valley, kids can explore the snow fort at its new mountaintop kids zone and take off on kid-friendly jumps, bumps and whoop-de-dos. They also can unearth Squaw Valley’s secrets using a map designed to lead them on a grand adventure around the mountain. Follow the map to find fun facts about the mountain’s animals, history and natural habitat.
Diamond Peak’s new Bee Ferrato Child Ski Center offers children’s lessons right outside the door. Wave to your kids as they learn new skills and swoosh past on their way to their next run.
Homewood Mountain Resort brings back its popular Snow Rangers Academy for children 4 to 12, featuring the X Based Learning System, which incorporates learning terms and processes from a child’s favorite sport. Your kid’s good at soccer? Then instructors apply terms and concepts from soccer to teach balance, weight shifting or body positioning during ski lessons.
You’ll also find two new kids’ programs at Tahoe Donner: Tuesday TD Tykes for Kindergarten Kids and Sunday Snowflakes Speedsters for upper-level young skiers.
And at Dodge Ridge, celebrating its 60th anniversary this year, kids taking lessons at Children’s Snowsports School can more easily get to the slopes on two new conveyor lifts.

More Fun—Granlibakken, a small ski resort and lodge on Lake Tahoe’s west shore, is Norwegian for “hillside sheltered by fir trees.” The oldest ski resort in the Tahoe Basin, it was created when Scandinavian ski jumpers built a jump there in the late 1920s. Today, you can have your photo taken with the resort’s “Granli-Barbarians” ambassadors: Bjorn to Party, Frida Roamabout and Lars the Loud.