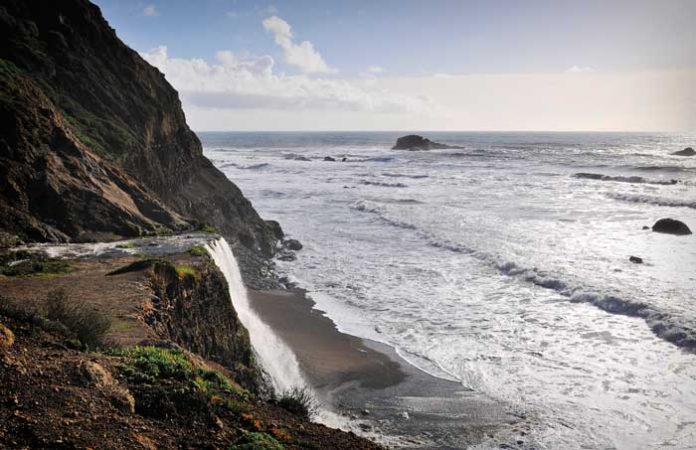 You might be tempted to think of the coast as too chilly a hiking destination for fall. Quite theopposite: It’s likely warmer by the sea than it is inland this time of year; in fact, you might be best off bringingyour pants with the zip-away legs. The sun shines, the breeze smells great, and you’ll feel a snap in your step as you stomp along the edge of the Pacific Ocean.
Lace up your boots, shove a camera in your backpack and attack one of these five hikes this month. Or two. Or all five. They’re each within a few hours’ drive of town and any one of them will leave you awed by the spectacular scenery coastal Northern California treats us to, especially when the autumn sun shines. Alamere Falls, Point Reyes National Seashore
Starting at the Palomarin trailhead near Bolinas—that little beachside Marin County town that’s rumored to despise visitors and can be hard to find because the roads leading to and from it are largely unmarked—this trail runs through thick vegetation, a fir forest, open meadows and out past a couple of lakes to deliver hikers to the beautiful cliffside waterfall. Along the 7.5-mile (round trip) moderate hike, pass Bass Lake and Pelican Lake—Bass is popular with swimmers in the summer and fall. Watch for poison oak and ticks, and once you reach Alamere Falls, get ready to scramble down to the beach. Rangers don’t recommend it, but everyone does it anyway—wear your good boots and step carefully. The payoff: a spectacular view of water spilling from the cliff to the beach. The water runs thickest in springtime but remains well worth the trek year-round. Before your hike, grab a sandwich at the Bolinas People’s Store, located behind the Community Center. They’re made fresh daily and often are gone by noon. (The curried tofu, when they’ve got it, is divine.)

Whalers Cove and North Shore Trail, Point Lobos State Natural Reserve
Nothing beats fall’s crisp, clear days in Monterey and Carmel, and Point Lobos provides miles of oceanfront trails to show off sea life and birds—from sparrows to big brown pelicans, the bird population here lures birders from throughout the world. Start with a picnic at Whalers Cove (one of just three “legal” picnicking areas in the reserve) and a visit to the cabin/museum that pays tribute to the area’s whaling history, then pick up the North Shore Trail to wander above Bluefish Cove as you head west. It’s a moderate hike—some up, some down—with views of granite-walled coves, Monterey pine and the famous Monterey cypress. Watch for sea otters cracking shells in the kelp and bring your binoculars during whale-watching season. When you reach the Sea Lion Point parking area, follow the sounds of sea lions barking—two rocks just offshore are thick with them basking in the sun.

Salt Point Trail, Salt Point State Park, Jenner
Sonoma County is home to some of the best ocean hiking on Earth, with sandy beach coves and wind-whipped bluffs galore. At Salt Point, several points of interest capture visitors’ attention: the pygmy forest (pretty steep hike up at first), the towering redwood forest, and ocean tide pools full of marine life—crabs, starfish and moon jellies—and lorded over by sea lions. Hike from the park’s campground along the coastline to admire the coves, where Aleut hunters once hunted otters and seals, and lumberers moved redwood logs gleaned from area hillsides. From the campground to Fisk Mill Cove and back, it’s about three miles round trip, a fairly flat and gorgeous walk.

Angel Island State Park, San Francisco Bay
Catch the ferry from Fisherman’s Wharf in San Francisco out to Angel Island. The largest island in the San Francisco Bay, Angel Island has been an immigration facility, prison-of-war detention center and missile site, but these days, it’s a lovely spot for hikers and other recreation enthusiasts. Several hiking options await, including the easy, five-mile loop around the island’s perimeter. Or take the more moderate Northridge Trail from the ferry terminal up to the summit of the island’s Mount Livermore. Wind your way uphill through the woods (smell the bay leaves?) out to a grassy meadow that affords views west to Mount Tamalpais, then go on up to the top of Mount Livermore (about two miles from the start) where a panoramic view awaits: the Golden Gate Bridge’s full span from the Marin Headlands to San Francisco’s Presidio, the Bay Bridge, Alcatraz, Mount Diablo, Treasure Island and the San Francisco skyline. Word to the wise: Don’t linger on the island so long that you forget to catch the last ferry out.