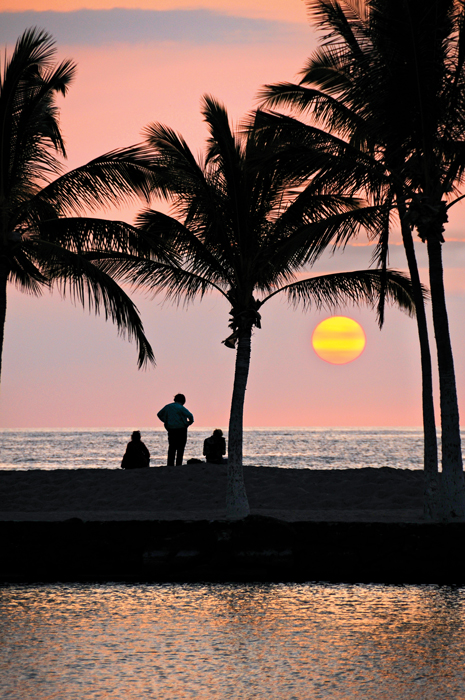 It was a typical and ideal Hawaiian afternoon—lightly overcast, muggy and warm—when my friends and I arrived at Kona International Airport on the west side of the Big Island of Hawai`i. It would be a short vacation, but we were ready to enjoy the great outdoors, the even greater food and, we were promised, the perfect Hawaiian sunset. Our home base was the Hilton Waikoloa Village, about 20 miles north of the airport, on the Kohala Coast. The Hilton is part of the Waikoloa Beach Resort, a 1,350-acre property that includes championship golf courses, a dolphin education center, and a vast selection of shops and restaurants.
Hawaiian architecture is designed to take advantage of the climate—and why not? The hotel’s open-air corridors, winding alongside the swimming pool’s “lazy river,” were no exception. You can shorten the walk to your room by hopping on the tram, but the corridors—also known as Museum Walkway, lined as they are with historical and cultural artwork and artifacts—are worth the walk. (The Hilton, which employs a museum curator, has approximately 5,000 works of art on display throughout its 62 acres.)
After depositing our bags (packing light is easy for this climate), we met on the first floor at Malolo Lounge for a quick bite. This is where we also discovered a delicious drink made with four types of rum called 180 Seconds Until Sunset. We nicknamed it 180 Seconds Until Passout. Among the wildlife living on this Hilton property—not very wild, as it turned out—are the dolphins. Dolphin Quest is part research center and part family fun, where people can literally wade into the Learning Lagoon and meet the dolphins up close and personal. (Reservations are required.)
We put on our life jackets and masks and waded in to meet these smart, sleek mammals. The handlers related information about dolphin behavior, health, habitat and stories of celebrities who wanted to ride one like a horse. (Note: Even if you’re a celebrity, you can’t.) While the younger male dolphins flipped and spun in sync, showing off for another visiting group, our mellow girl Chaka kept rolling over for belly scratches. Fun fact from the handlers: Dolphins can swim up to 25 mph; so if you’re keeping up with them, you’re not swimming with them, they’re swimming with you.
That afternoon, an Ocean Sports catamaran took us snorkeling at Anaeho`omalu Bay. Before jumping in, we got a thorough lesson on how to snorkel, including what we might see (fish and other marine life), what we shouldn’t touch (everything) and what we could touch (the water). I’d never snorkeled with a professional company before. I was impressed with the information related by the Ocean Sports staffers, some of whom were students in marine biology or a related field.
I finished that day underwater as well, with a spa treatment at the hotel’s tranquil Kohala Spa: a coco-mango bath (its signature scent) followed by a Hawaiian sea salt-red clay dirt body scrub. It was wonderfully relaxing, although I suspected that scrubbing off the old and exposing the new skin is best saved for one’s last day of vacation. We took a 3.5-mile jaunt along the Waipi`o Valley Rim Trail, a guided hike on Hawai`i Forest & Trail’s menu. Matt, our trail guide, led us in an entrance chant before starting us on the trail: We asked for permission to come in and promised the forest that we wouldn’t remove anything that we wouldn’t or couldn’t give back. Then we stepped inside.
Waipi`o Valley, the “Valley of the Kings,” was the boyhood home of King Kamehameha I, who formally established the Kingdom of Hawai`i in 1810. Once an incredibly fertile valley, which supported churches, schools, a post office and even a jailhouse, it today is inhabited by fewer than 100 people, primarily farmers and fishermen.
We kept an eager eye out for mongeese, wild pigs and hawks but spotted nothing. Something else we almost didn’t see: an actual view. We’d stop at an allegedly scenic point only to peer out over a blanket of vog, which stands for either volcanic smog or volatile organic gases, depending on who you ask. But then, like magic, Matt would tell us another story—myth, legend, truth?—about the Waipi`o Valley, and the vog slowly would lift to reveal the basin below.
Other marvels of the landscape included koa wood trees (native and protected) and eucalyptus (not native, but proliferating). We also tasted fresh guava fruit (also not native) straight from the tree.
We honored our entrance chant: All we took back out with us were photographs and our sweaty selves.
Back at the resort, while dining outdoors at Kamuela Provision Company, we waited for our promised, perfect Hawaiian sunset. But all we saw at 7:09 p.m. was a foggy glaze over the darkening horizon. Oh well—everyone knows you can’t make demands of Mother Nature. We consoled ourselves with macadamia nut-crusted shrimp, freshly caught opakapaka and mahi mahi, and lilikoi (passion fruit) cheesecake. What many people don’t know about the Big Island is how dry much of it is. While the east side gets an average of 130 inches of rain per year, the west side gets an annual average of less than 10 inches. As we drove down Saddle Road, which cuts across the island and passes between the island’s two largest mountains, Mauna Loa and Mauna Kea, we could almost see a dividing line between wet and dry.
Danny, another Hawai`i Forest & Trail guide, took us on the 11-mile drive around the rim of the Kilauea summit. (We didn’t walk across the caldera, which is an option if you have the time.) At the Kalapana viewing area, you can see where the lava flows from Kilauea across the road, over the cliff and into the ocean. Simply put, it’s creating more land—one of the main reasons the Big Island is a geologist’s dream vacation destination.
Our last dinner at the resort was at Sansei, a seafood restaurant and sushi bar, which served up mouthwatering dishes like panko-crusted ahi rolls and salmon carpaccio. Karaoke was starting, but we couldn’t bear to leave our dinner plates. You can do karaoke anywhere, but fish like this is hard to find.

A fruit-filled breakfast at the Water’s Edge—a grand ballroom-turned-buffet eatery that sits by the Hilton’s lagoon—was our last meal before it was time to pack. My bags mysteriously had shrunk—did I really buy that much?—so I hit up Island Gourmet Markets at the Queens’ MarketPlace for a pineapple-decorated carry-on bag. (The Kings’ Shops, another retail outlet with the likes of Tiffany & Co., Coach and Louis Vuitton, attracts more serious shoppers.) Then it was time to exchange my slippahs for sneakers and head to the airport, sending out one silent aloha to Chaka and a hope that someone, somewhere, at some point got to see their perfect Hawaiian sunset.

Just Because I Didn’t . . .doesn’t mean you can’t golf, bike, ski, go deep-sea fishing, hunt, study astronomy and take agricultural tours. All of these activities and plenty more are available on the Big Island. Visit bigisland.org.

• In just 4,000 square miles, the Big Island—larger than all the other Hawaiian islands combined—claims all but two of the world’s climate zones: the Arctic and the Saharan. • The Big Island has five volcanoes: Kohala is considered extinct, having not erupted for 60,000 years; Mauna Kea, which is dormant, is the world’s tallest mountain when measured from its base on the Pacific Ocean floor; Hualalai last erupted in 1801; Mauna Loa last erupted in 1984; and Kilauea, home to the volcano goddess Pele, has been continuously erupting since 1983.

• Ongoing research has produced strong evidence that sunscreen can destroy coral, a living creature that contributes to the welfare
of oceans worldwide. Since sunscreen takes about 20 to 30 minutes to absorb into skin, apply it well in advance if you’re swimming
near any coral reefs.

• Abide by the rules: Don’t feed or touch the sea turtles (honu). Their shells, which are essentially ribcages, have a protective coating that can be damaged by the oils from your skin.

A Place To Stay at Waikoloa—If you want an intimate setting—or are with the family and need a kitchen—check out Kings’ Land. Located between the resort’s two championship golf courses, Kings’ Land is fully equipped, with spacious suites and access to all of the Waikoloa amenities, plus a spa, Wi-Fi, swimming pool complex, children’s club and its own central marketplace.