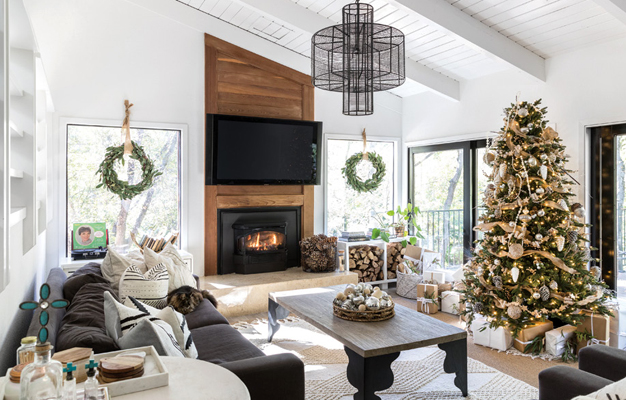 Rain drumming on the roof. Ina Garten hot chocolate (or whiskey or cabernet) in hand. And a wonderland of decorations all around. That’s how newlyweds Justin and Whitney Fecteau do the holidays.

“I love decorating, entertaining and cooking. I think I got that from my parents being in hospitality,” says Whitney, whose family owned a restaurant in Laguna Beach when she was growing up. “It comes as second nature.” It also comes with the territory of her profession. Whitney is a designer for Design Shop Interiors, a local interior design firm recently featured in Better Homes & Gardens, and a semi-retired floral architect. (According to her peers, she’s also one of the best cheese-plate stylists west of the Mississippi.)

She found her perfect match in Justin, a heavy-equipment operator who happily embraces Whitney’s love and talent for making their home feel festive. “The day after Thanksgiving, it’s on: ‘Home Alone’ on the TV, a fire in the fireplace and Christmas music playing,” he says.

Though it’s their first as Mr. and Mrs., this is Justin and Whitney’s third holiday season in their Newcastle farmhouse. Upon moving in in October 2015, they redid the flooring, painted the walls and ceilings white and ripped down the dated curtains. Then Whitney went to work. “I wanted to bring that SoCal vibe to the country while being true to this house,” she says. “It’s a modern boho farmhouse—if that’s a thing.”

Justin’s been making improvements and upgrades around the house as well, including helping to remove 10 trees that went down during the storms last winter. You’ll now find that wood crackling in the fireplace all season long. Justin welded the brackets for these open kitchen shelves, which were milled by California Hardwood in Auburn. The Fecteaus’ collection of barware and mercury glass is beautifully displayed throughout the house.