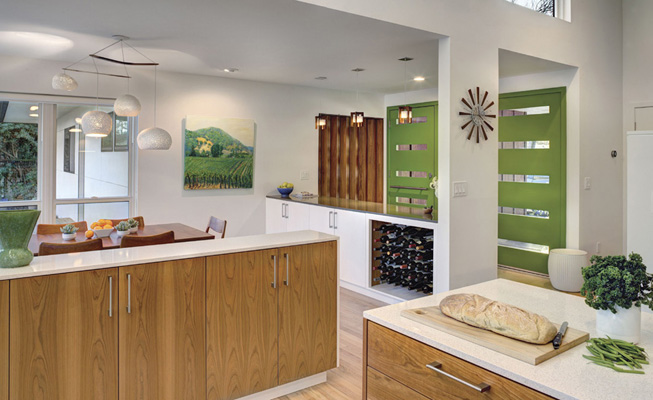 He found it in July 2013. She looked and said “no.” Then she thought, “OK, maybe.” Wendy Allen well remembers the day husband James came home from a run and said, “You have to come look at this house.” She had to. Even though the couple and their three sons were settled comfortably in a perfectly suitable Mace Ranch home, Wendy went. What she saw was a midcentury-modern diamond in the rough (emphasis on the rough) in a delightfully secluded pocket of Davis—a neighborhood the couple knew from their regular running routes. Built in 1964, it was an “amazing” house, Wendy says, where, it turned out, time stopped around 1972. Aside from some modifications made then, it was largely in its original state. Not good. “I just thought it was going to be too much work,” she says. “I didn’t think we could do it.” She and James called Ken Kirsch of MAK Design + Build in Davis to come out and take a look. “We asked him if he thought it could be a good house. He said, ‘I think this could be an awesome house.’” The Allens went for it. Wendy was right. It was a lot of work. But after a 7-month-long, two-phase renovation, the once dark, outdated collection of disconnected spaces became a light-filled, spacious, beautifully integrated, indoor-outdoor home that fits an active 21st-century family. “I knew if we bought this house, we were going to do it right,” Wendy says. And so they did. Design direction: The Allens respected the home’s architectural roots but needed to improve integrity, function and style. “We connected right away,” Wendy says about working with MAK. “Anthony had such a great vision. They were able to give us details that take the house to a whole new level.”

Renovation rundown: The roofline was modernized with a bank of clerestory windows. The kitchen, living room, new dining space, entry and master bedroom all got expanded views to the outdoors. Two bathrooms and the laundry area were remodeled for maximum use of space. The entry was updated. (Gong, who orchestrated the home’s color palette, picked the snazzy green color.) The pink cinderblock that once surrounded the living room fireplace went away, replaced with a sophisticated swath of ceramic tile that soars to the roofline. A dramatic canopy of stainless steel and wood defines the renovated kitchen. Wow.

Elements of style: “The proportion and verticality of the fireplace, the new dining room and the kitchen canopy are the three main components that define this home,” Kirsch says.

Think tank: “We knew what the house needed to feel like,” Wendy says, “but there are so many things we never would have thought of.”

Like what? The different sizes and shapes of the clerestory windows dividing the entry/dining and kitchen/living room spaces. The variation wasn’t just a random choice. “The purpose was that each window bring in a different amount of light,” Kirsch says.

What else? Wendy says James noticed a standard cabinet by the refrigerator would block part of the view to the outside. “Anthony did the measurements and came up with an L-shaped cabinet,” she says. “We were trying to figure out how to maximize the sightline, but we never would have thought of that.”

Connecting: “Throughout our relationship, we were getting to know James and Wendy,” Gong says. “They are a social, active family and like to entertain. It was through that process we evolved this design, which is all about connection to the outside.” Gong notes that all the surfaces, colors and textures harmonize. “Collaboration is key to making the process a success, making the house work,” Kirsch says. “It’s crucial to the design/build process.”

Fitting in: “This is not a ‘modern’ neighborhood,” Wendy says. “We were a little worried about making the house too modern, but they gave us a warm-feeling house with amazing, modern and brilliant touches.”