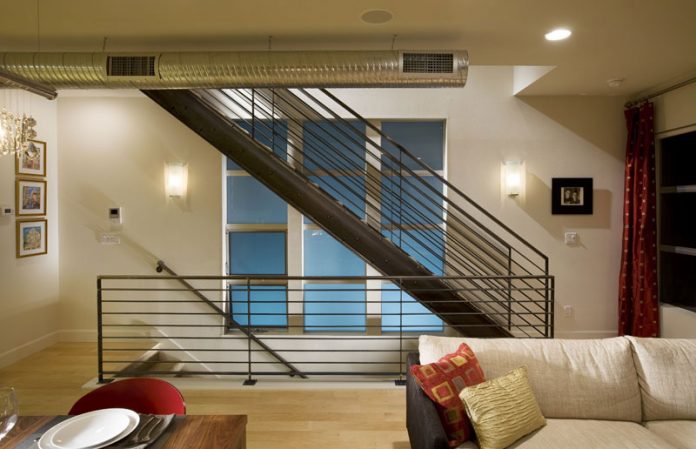 When they sold their home and bought a loft, this fun-loving couple started a whole new life.

For 16 years, Barbara and Terry Allen-Brecher loved their Curtis Park home. They renovated it, carefully selected furnishings and artwork, were really picky about the yard and raked up a ton of leaves every fall.

“We had a beautiful home on a beautiful street,” Barbara says. “It was really terrific, but it was an old house (built in 1926), and they take a lot of care. After 16 years, we were going to have to start redoing the redos.”

That’s when they started thinking about a new kind of life—one that didn’t revolve around maintaining a piece of real estate. “We asked ourselves, ‘Do we want to keep doing that, or do we want to have our adventure?’” Terry remembers. The adventure idea won. “We really wanted to move downtown into a loft space, and we had been watching the loft developments, and so we started to go and see everything we had heard about.”

One of their jaunts led them to Regis Homes of Sacramento’s Lofts at IronWorks in West Sacramento. “We went in and said, ‘This is what we have been looking for,’ but we wanted to live in Sacramento,” Barbara says. When they found out Regis was building SoCap Lofts downtown (at Sixth and R streets), the Curtis Park home got a “for sale” sign.

While they were waiting for their loft to be built, the couple cleared out their house (attic and basement included), selling or giving away almost everything except art. “We were already leaning to contemporary in our art collection,” Barbara says, “but I don’t think we have a stitch of the furniture here that we had there.” The search for new stuff was on.

“I love the hunt,” Barbara says. “I scoped out all the contemporary furniture stores in San Francisco. We went to 22 in one weekend and stayed in the city to educate ourselves about contemporary styles. It was like learning a new language.”

That weekend, they scored a credenza of American walnut, but they found almost everything else for their three-level, 1,184-square-foot loft right here. The fun red dining room chairs and a lighted bench with Lucite legs for the entry came from Design Within Reach on 16th Street. The chrome-and-crystal chandelier over the dining table and a mobilelike light fixture are from Lumens Light + Living on K Street. And when they walked into Limn on Arden Way: boom. “Eddie Lopez at Limn is like an interior designer/therapist,” Terry says. Lopez helped them choose the sofa, ottoman, dining room table, bar stools, bed, bookcases for the home office and cabinetry for the living room. But he also reined them in.

“I think space is a luxury in a room, whether it’s a big house or a small apartment,” Lopez says. “I think it’s always better to start with less, and later, if we see we need more, we can always add.”

While Barbara and Terry were choosing furniture, they also were tweaking the upstairs master bath, adding a soaking tub, new tile, granite countertops and sunken sinks. Downstairs, they put a fireplace on the dining room wall. Ventless and framed in stainless steel, it’s fueled by denatured alcohol and offers more ambiance than heat, which is just perfect. When it’s not on, it looks suspiciously like a stainless steel picture frame.

So far, Barbara and Terry’s move from house to loft and from suburb to central city has been everything they hoped for—and more. “We sold one of our cars. We have two scooters and four bikes, and we’re going to sell one of the scooters, because living here, we just don’t use them,” Barbara says. They shop at downtown farmers markets, bike to restaurants and revel in their free time. “We love to travel and we love to play, and the Curtis Park house was eating too much into our playtime,” she says. “You’ve got to be able to go and do. . . . Life just isn’t as long as it used to be.”

Something to ponder while you’re raking those leaves this month, hmm?

Bravo: Painter John Huerta and Day of the Dead