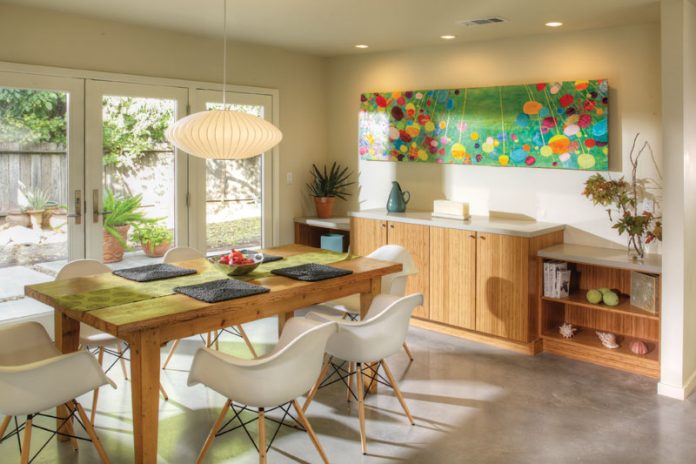 The house was horrible. It looked like a bunker. Bring on the bulldozers. Those were the kinds of comments that peppered Mary and Jim Patterson’s early conversations about the wreck of a Nixon-era home they found for sale on the outskirts of Davis in 2008. In the end, as scary as the house was, the Pattersons couldn’t walk away. The squat one-story house was set back from the road on a big lot, across the street from acres and acres of neatly tilled farmland. Other pluses? Privacy, plenty of room for gardening and easy access to town. “Jim thought the house was horrible, but the yard made it worth doing,” Mary says. She agreed. And to make sure they weren’t digging themselves into a money pit, the couple asked Ken Kirsch, owner/production manager of MAK Design + Build in Davis, to go out and take a look. When Kirsch said they could hold off on the bulldozer, the Pattersons snapped up the house and started planning. “We changed very little of the original footprint, adding just a little over 200 square feet—a little bit out front, a little out back,” says MAK designer Anthony Anderson about what is now a sleek two-bedroom, two-bath, two-office home with flair to spare.

“This is something they are really good at doing: high-end design on a super budget,” Mary says about MAK. Anderson explains how the company’s design/build process keeps costs on track. “I have to know how much things cost because I have to build it, and I want to build it,” he says. “I have to design it so it’s affordable. We’re in the same office with the guys who are swinging hammers every day. If I want to tear something down and add, say, some beautiful cedar columns, they say, ‘OK, but here’s what it’s going to cost.’ Oh, yes—I get real-time feedback about costs.”

Take the roof, for example. “We were talking about the ceiling and how it was very low, and it really made the front of the house look like a bunker,” Mary says. “We had wanted to raise the roof, and we started looking at the budget, which was more than we wanted to spend. Ken and his crew kept working on it and working on it and working on it, until they figured out a way to do it. They lifted it about a foot across the front. It made all the spaces inside more interesting, and it made all the difference in the way the front of the house looks.” Inside, all the walls were painted the same color: white. Jim Patterson insisted that the new floor, a combination of concrete and polymer, look like what you’d find in a factory. No color, no stamping, no swirling. “There’s not a lot of ‘jewelry’ in this house,” Anderson says. But, really, who needs glitz when you’ve got so much style?

The Patterson home is one of six on this year’s Heart of the Home Kitchen Tour, May 1 from 9 a.m. to 4 p.m. The event raises funds for disaster relief and other emergency services provided by the Yolo County Chapter of the American Red Cross. For ticket information, call (530) 662-4669.