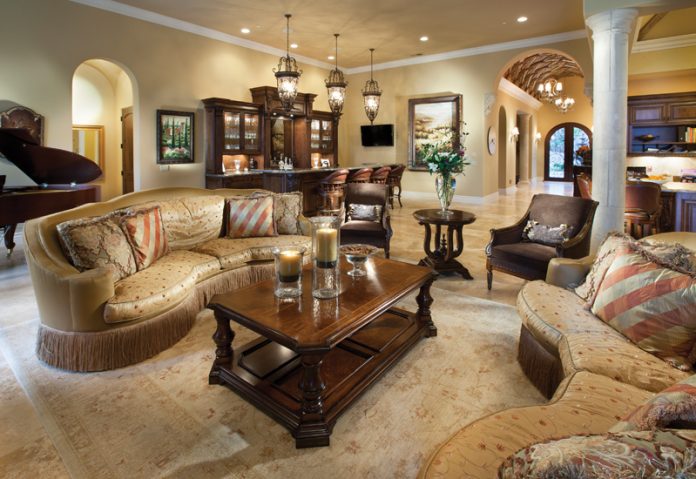 Jay and Kelly Resendez’s 2007 holiday party was in full swing when their lights starting going on the fritz. After a few trips to the breaker box, which didn’t solve the problem, Jay grew suspicious of the festive decorations. “I thought maybe we had too many Christmas lights on, so I walked around unplugging them,” he remembers. The DJ kept spinning tunes, and the 100 or so guests kept making merry—until warm water started raining out of can lights in the kitchen. Jay went outside to take a look, saw smoke curling from the roof of the Los Lagos home and ran back in shouting for everyone to get out. Apparently, an attic fire had melted PVC parts on the sprinkler system, causing the shower in the kitchen and signaling an early warning that something was amiss. Good thing. Around 9 p.m., when part of the roof collapsed, everybody was outside and safe. But by the next morning, despite firefighters’ efforts, the house was a goner.

Jay and Kelly never considered moving out of their neighborhood. The home’s foundation was salvageable, so they rebuilt, hiring architect Mark McHenry of Mark McHenry & Associates of Sutter Creek, John Caulfield of Landmark Builders in Granite Bay and David Leinberger of LAUNCH Interior Design, also in Granite Bay. “We ended up changing some things about the (first) house we didn’t like,” Jay says, adding that Kelly especially wanted more natural light inside. “It was always dark in here,” she says. “It always felt like we were swallowed up. We went a little higher (with arches on the exterior) and that made a huge difference.”

Landmark Builders won an award for the project from NARI, the National Association of the Remodeling Industry, in the Entire House Over $1 Million category. Reconstruction began in May 2008, and the Resendez family was in their new home by March 2009. “When most people set out to build a custom home, they don’t have as tight a timeline,” Kelly says. “There was a different motivation on this one,” Caulfield says. “We wanted to get the family back into their home ASAP.”

Even so, Kelly says she didn’t feel rushed or that she and Jay sacrificed on any of the details. “It was just a wonderful experience of everything coming together at the same time.” Raising the ceiling to high art
“Ceilings are very often the last things people address,” says designer David Leinberger of LAUNCH Interior Design. His take? Don’t waste that space—do something people can rave about. “I designed this entry area with this barrel in mind, with the ceiling in mind,” he says about Jay and Kelly Resendez’s home. Enhanced by layer after layer of paint washes and finishes, the lavish treatment began with a simple, smooth application of plaster—“real plaster, not foam, not fake, all hand-cast and molded to fit the shape.” Leinberger was working with the Resendezes on the interior of their previous home when it burned. Continuing his work on their new home, he designed the entry to command attention. Ornate medallions, symmetrically centered in individual frames, play off triple-trimmed squares. The formal geometry complements the home’s old-world columns, cornices, framed fireplaces and travertine floor. “That ceiling pops with color and it’s a feature that’s really unexpected. It sets the stage for the rest of the house, which is ‘Wow.’”