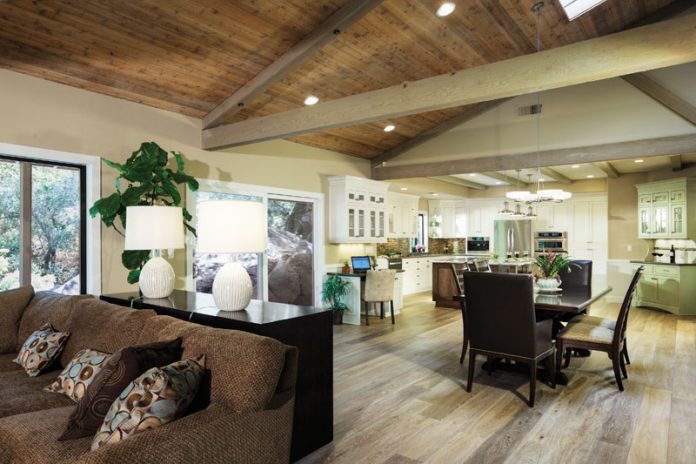 There are so many ways to begin a marriage. Remodeling a house probably isn’t the most common, but that’s the route Kristine and Terry Joslin took. In fact, they bought their 30-year-old Orangevale home before they married, moving in this past February as newlyweds of eight months. Remodeling, with all of its pitfalls, wasn’t the original plan. What they were after was a new house or a lot they could build on. Then Terry got a tip from a friend about a home that was about to go on the market. It was a game changer.

“I loved the property,” Kristine says. Here’s why: 2.5 acres, tucked way, way off the road (they thought they were lost when they first tried to find it), a pond, two creeks, a landscape gloriously studded with behemoth boulders, and a modest one-story house they could work with. “Terry liked the property, he enjoyed it, but he had to have a newer house,” Kristine says. As charming as the house might have been in its day, that day was over. “It was built in 1979, and it had that look,” Terry says. Happily, an update was within reach. They started hunting for a remodeling contractor in the classic ways: searching the Internet and Yellow Pages, then  ultimately selecting Mike and Kathe Russell, owners of DreamBuilders Home Remodeling in El Dorado Hills. “I liked their process and that they were willing to talk about the budget,” Terry says, noting that other contractors they interviewed seemed to shy away from the hard numbers needed to get the show on the road. That DreamBuilders could do CAD (computer-aided design) was another big plus, Terry says. “When we sat down with them, we felt immediately comfortable.”

Good thing. This was no paint-and-paper makeover. A sunken living room and sunken bar were torn out, the ceilings came down, the floors were ripped up and “tons of brick” were pried from the walls of the kitchen, which once featured an archway Kristine humorously tagged as a pizza oven. As the vestiges of 1979 vanished, the Joslins brought out a thick stack of magazine pages that expressed each of their design preferences, down to which pendant lighting fixtures to hang over the kitchen island. But they didn’t agree on everything. “Houses of the 1930s and ’40s are my favorite,” Kristine says. “Terry likes new houses. This was our compromise.” Today, the house has the air of a top-drawer mountain retreat. Haus Home Décor of East Sacramento helped select the not-too-urban, not-too-country transitional-style furnishings.

Looking at the interior today, you’d never guess that at one time there wasn’t enough light in the kitchen or that the European white oak flooring triggered an uh-oh moment for Terry. When the planks were delivered, he opened the boxes, saw the color variations in the wood and thought: “Oh, no, this isn’t right.” Kristine, though, liked the colors. They pushed on to great success. “When clients are this clear on their vision, we just have to meld their ideas together and work out some compromises,” says Mike Russell. “They had a lot of ideas and a lot of magazine clippings,” says Kathe Russell. “Our job was to marry them together.” Seeing is believing
Why isn’t the kitchen island the same style and color as the cabinetry? “We didn’t want the kitchen to be too busy, so that idea would never have crossed my mind,” Kristine says. The cabinet countertops are Cambria, a natural quartz surface. The island is topped with a slab of Bianco Antico granite. An all-white island would have made the kitchen too white, says DreamBuilders kitchen designer Christina Medeiros. Once the Joslins saw the proposed design on the computer screen, they agreed. “Sometimes,” Kristine says, “we’d resist an idea, and then we’d see it on the screen and say, ‘Oh, yes. Maybe that would look better.’”