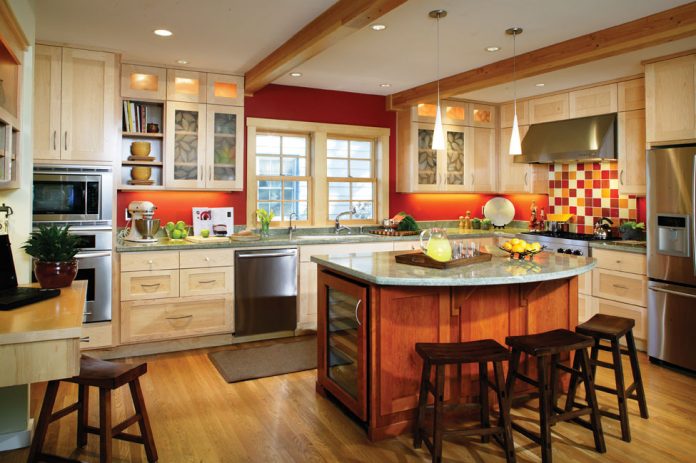 A vintage home is reinvented for the way we live now.

When I first saw it,  I could see the potential, Ada Cochavi Ross says about the 67-year-old two-story Land Park home she and her husband, Peter Ross, bought in 2004. Not everyone would have. It had small, boxy rooms, a dated floor plan and dark, cramped hallways, and it needed everything from floor to roof. Oh, and landscaping (what landscaping?), front and back&emdash;that needed rethinking. And the way the exterior looked from the street (boring), and the porch and back patio (awful) . . . you get the picture. It wasn’t easy to see the potential, Cochavi Ross says, laughing, and I knew it was going to be a lot of work, but I could see it.

What the couple actually saw was a 1,951-square-foot home where time stopped probably  around 1972. Dull-as-dishwater cabinets in the kitchen. Marble-ish Formica and fake-brick flooring in the baths. Zero curb appeal; the backyard was overgrown. So what, exactly, was the draw? The neighborhood? Yes. And a kitchen and dining room at the back of the house. That, you could do something with.

I really liked that, Cochavi Ross says. Usually the bedrooms are at the back. And even though everything was really enclosed, I could see that you could connect the spaces and open them up to one another. Good thing, because this couple didn’t just want to gaze longingly at the yard. They wanted it to work as another room. A lot of older homes were built in an era when the outdoors didn’t connect with the indoors, says Sacramento architect Debbie Gualco of Reynolds Gualco Architecture, who designed the renovation. That’s what we try to do: bring the newer lifestyle people enjoy today to the outdoors and, at the same time, expand the interior space by using the outdoors.

After about a year of planning, the connecting, opening and expanding operation began. Everything went down to the studs, says Cochavi Ross. We opened everything up, inside and out. And when it came to putting things back, they didn’t go overboard. I think you can get taken away with design, she says. I wanted to stay away from things that are trendy. They look nice, but that’s the first thing you’d start to hate. We went for a simple, clean look. I didn’t want a lot of trendy things. I was looking for things that wouldn’t get dated.

Take the decision to preserve the home’s original oak floors, for example. Instead of replacing or covering them, the project’s general contractor, Joan Hancock of Her Land & Co. Construction, seamlessly extended them into two additions that Gualco designed: 254 square feet on the first floor and 318 square feet on the second. Choosing the right flooring is always tricky, but it’s crucial in a small home, where chopping up large areas can be deadly. So instead of tile or stone in the main spaces, golden-grained oak flows from the front door to the patio and up the stairs to Cochavi Ross’ office/loft and the bedrooms.

Ada really had a certain style in mind, Ross says about his wife. You can tell by talking with her that she really does her research. Cochavi Ross tore through websites, books and magazines for ideas, and built strong relationships with her architect, home builder and cabinetmaker. For help with color, tile and the layout of the kitchen cabinets, she sought out kitchen-and-bath remodeler Irit Winston. After all, she says, I hadn’t ever designed a kitchen before.  And when it came to picking out kitchen appliances, Cochavi Ross went to her in-house expert: her husband. He’s the cook, she says. He knew exactly what he wanted.

It really was a collaboration, Cochavi Ross says about the renovation. Debbie, Joan and Irit . . . and a lot of books and magazines. . . . We replaced almost everything in the house. We might as well have taken it down, but we didn’t.